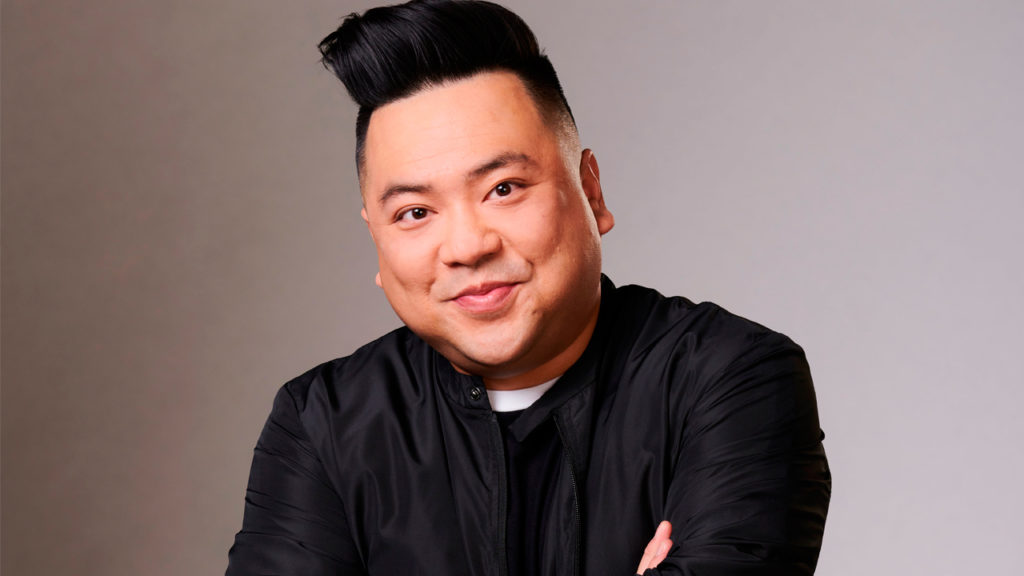 One of the walls on display behind actor Andrew Phung, sitting in his home office deep in the heart of East York, is dedicated to sneakers, hundreds of sneakers. The other, wrestling belts. And it’s the latter that gives an indication of the direction of Phung’s new show Run The Burbs on CBC-TV. It is over-the-top in the best possible way.

Phung will be well known to fans of the hit comedy Kim’s Convenience, on which he played best buddy Kimchee. A role that earned him four Canadian Screen Awards (2017, 2018, 2020 and 2021).
On the new show, Phung portrays, well, Andrew, a stay-at-home dad, who is married to Camille and lives in the suburbs with their kids.

“Andrew embraces that stay-at-home dad role,” Phung says. “And they are an inseparable couple. They found each other at such a young age. They’re best friends, they make each other laugh, but they’ve had to grow up together.”

In the first two episodes alone, there are both serious and silly subjects, including a speed limit drag race, sleepaway camp parenting anxiety, and getting hip-hop icon and neighbour Kardinal Offishall to play a community backyard BBQ. Phung and his family embrace suburban life with gusto. Like Kim’s Convenience, the show is at once very suburban Toronto but also has that universality that any good sitcom needs. And make no mistake this is a good sitcom.

“That’s the vibe, Kim’s Convenience did that so well,” Phung says. “It was one of those things where you could watch it and you knew it was Toronto and if you live in Toronto you loved it for those reasons. But then it was also a thing where it could have been any urban city centre. Like, I would be in Saskatoon with Paul Sun-Hyung Lee (Appa on Kim’s Convenience) and people are coming up and they’re like they love Appa because there’s a convenience store down the block in their small town and so the idea of being specific, but also being very relatable opens up the show”

Phung’s character on the show is married to Camille (Rakhee Mozaria), who is also a writer on the show, and they have two kids (Zoriah Wong and Roman Pesino), a mini-van, and like many suburbanites really want to get to know the neighbours with the pool. Phung says Camille is Andrew’s ride-or-die and their close relationship gets them through the endless zany antics and situations that arise.

“Andrew and Camille met in university. They had a child when they’re really young. And I think that in a way that decision narratively, kind of informed their outlook on being parents,” Phung explains. “And how Andrew became the stay-at-home dad because Camille went back to school and she’s the one who went into the workforce, Andrew embraces that stay-at-home dad role. And so they are, they’re like inseparable.”

Phung says he takes a lot of inspiration from his own life as a parent, as well as growing up in the suburbs of Calgary, where he cut his teeth as a comedic actor for years. He was still working in Calgary when Kim’s Convenience creator, Ins Choi, came to see him in a Fringe Festival show. It took him a couple of seasons before he and his family made the leap to Toronto.

“We rented a spot in Toronto and to give it a go, and [the family] all fell in love with the city,” Phung says. “We felt so comfortable here.”

Now Phung is happily tucked away in East York with his own family and a sizable collection of aforementioned sneakers. He says, growing up in the ’90s influenced his obsession with sneakers. Since then, whenever he travels, since he doesn’t drink alcohol, when his friends go out at night, he would go sneaker shopping.

He says he has about 400 pairs at his home and another hundred or so back in Calgary.

Run The Burbs premieres on CBC-TV on Jan. 5, and Phung is suitably excited to release the show into a world that certainly needs a few laughs.

“I’m so excited for them to see it for the first time because this show is so full of life and energy,” he says. “And I think it’s really reflective of today’s parents. And I think that’s something that’s been missing from television seeing what parenting today looks like.”