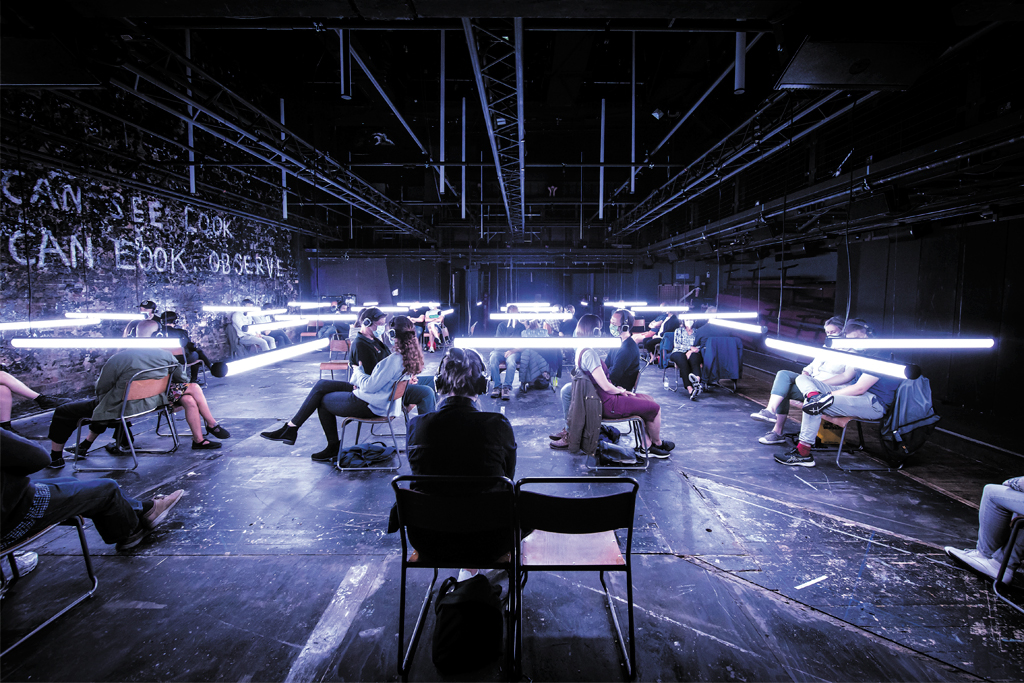 The Princess of Wales Theatre is scheduled to present the first indoor theatre show in Toronto since the pandemic shutdown. Scheduled to open Nov. 17, Mirvish will be presenting the international premiere of the Donmar Warehouse production of Blindness, a socially distanced sound installation. The date is subject to change based on health and safety protocols.

“Our friends at the Donmar Warehouse in London came up with a brilliant and powerful way to tell a timely and important story in a theatrical setting. They came up with a unique adaptation of the modern classic novel Blindness by the Nobel laureate José Saramago, itself about the effects of a pandemic on a community,” says David Mirvish. “Blindness was a resounding success in August and September at the Donmar and helped to usher in the return of theatrical events.”

The show runs 70 minutes with no intermission, and there will only be 50 people in attendance per performance. According to Mirvish, the sound is designed to be “binaural, making the work sound as if it were physically happening around you, putting you in the centre of the action.”

Two new documentary photography exhibitions opening at the Art Gallery of Ontario give Torontonians their first chance to have a look at some of the latest acquisitions of works by African-American artists, including Dawoud Bey, John Edmonds, Wardell Milan and Ming Smith, as well as Malian photographer Malick Sidibé. It’s part of the gallery’s commitment to greater diversity and representation.

The Documents, 1960s–1970s exhibition focuses attention on a “moment of great social change internationally” and features both studio portraits and street scenes.

Acclaimed singer-songwriter Donovan Woods will be live-streaming a one-hour solo acoustic concert at Roy Thomson Hall on Nov. 5. The performance, which was recorded by seven robotic cameras while Woods was alone on stage in the Toronto concert hall, is in celebration of his seventh studio album release, Without People.

In an effort to support others with the release of his album, 50 per cent of net ticket sales will be given back to participating show promoters, and Woods will donate 100 per cent of his artist proceeds to ArtsCan Circle (Canada) and Southern Girls Rock Camp (US). During the show, Woods will perform a nine-song set of songs off the new album and a few fan favourites. Philadelphia-based group Lullanas will open the show. Tickets are $15.

Of faith and folly

The Factory Theatre is kicking off its new season with a live streaming world premiere of acts of faith by award-winning Asian Canadian playwright David Yee, directed by Nina Lee Aquino, and starring Natasha Mumba. According to the Factory, this production has been written specifically to be performed in a digital environment.

The story revolves around the main character, named Faith, who is mistaken for a prophet. Acts of faith is a story about the power of faith, the inescapable persistence of our online identities and the nature of truth in a digital age. Sounds timely.

Acts of faith will stream live to audiences at home for six performances, Nov. 19–28. Admission is free of charge.

The Kensington Market Jazz Festival is offering two days of incredible live stream performances Nov. 7–8. One of those headlining the weekend of performances is jazz pianist and vocalist Champian Fulton, who is described as “one of the most gifted and pure jazz musicians of her generation.” She will be playing, alongside saxophonist Nick Hempton, Sunday evening, Nov. 8, at 9:30 p.m. Other performers include Paul Marinaro, Carol Welsman, Jane Bunnett and many more.

The Musical Stage Company will be offering a virtual edition of its signature concert event, Uncovered: Notes From the Heart, running from Nov. 11 to Dec. 6 and featuring some of the city’s top musical theatre performers, such as Divine Brown, fresh off a run on Broadway where she performed in Harry Potter and the Cursed Child, as well as Hailey Gillis, Bruce Dow and others.