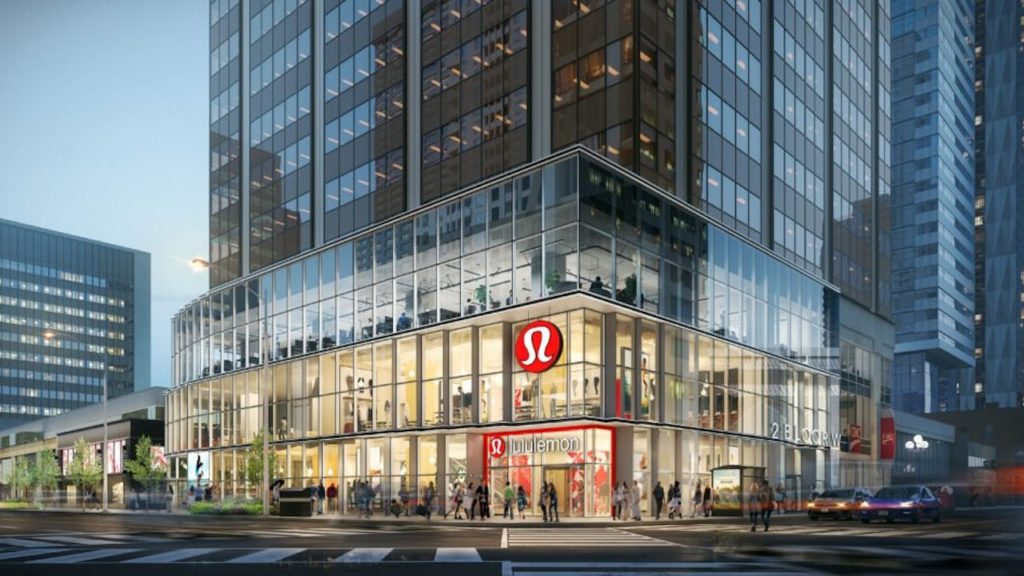 Toronto is getting a massive three-storey Lululemon flagship store, right at the corner of the city’s bustling Yonge and Bloor street corner.

The brand, which hails from Vancouver, will occupy roughly 12,100 square feet and span three floors, a huge upgrade from its current, much smaller 3,067 square foot space at 153 Cumberland St.

The store will have concourse and street level access, including a direct connection to the TTC. You won’t be able to miss the new store, which features wraparound glass.

KingSett Capital, the real estate investment firm that owns the building, shared the news last week, noting that the flagship store will be part of a “significant podium renovation.”

The space was previously occupied by Talbot and Swarovski, both of which have already moved out ahead of the extensive renovations that will be taking place.

The 2 Bloor St. spot is set to open in 2024 and when it does, it will be one of the company’s largest retail locations, second to Chicago’s 20,000 square foot location in Lincoln Park. The new Toronto store will be the largest one in Canada, beating out its over 6,000 square foot Vancouver flagship location.

This massive LuLulemon won’t be the only yoga retailer on the block, with Alo Yoga, a Los Angeles-based company, opening up shop just down the street at Yonge and Bloor – a former The Gap location.

The Yonge and Bloor area is growing fast; currently, the southeast corner is home to a Nordstrom Rack and the southwest corner is the site of the much-awaited One Bloor building, a multi-use condo project that is set to house a new Apple flagship at its base.

The commercial podium development Lululemon will be a part of still has a few available retail spaces open, so we’ll see who the company’s new neighbours will be come 2024.