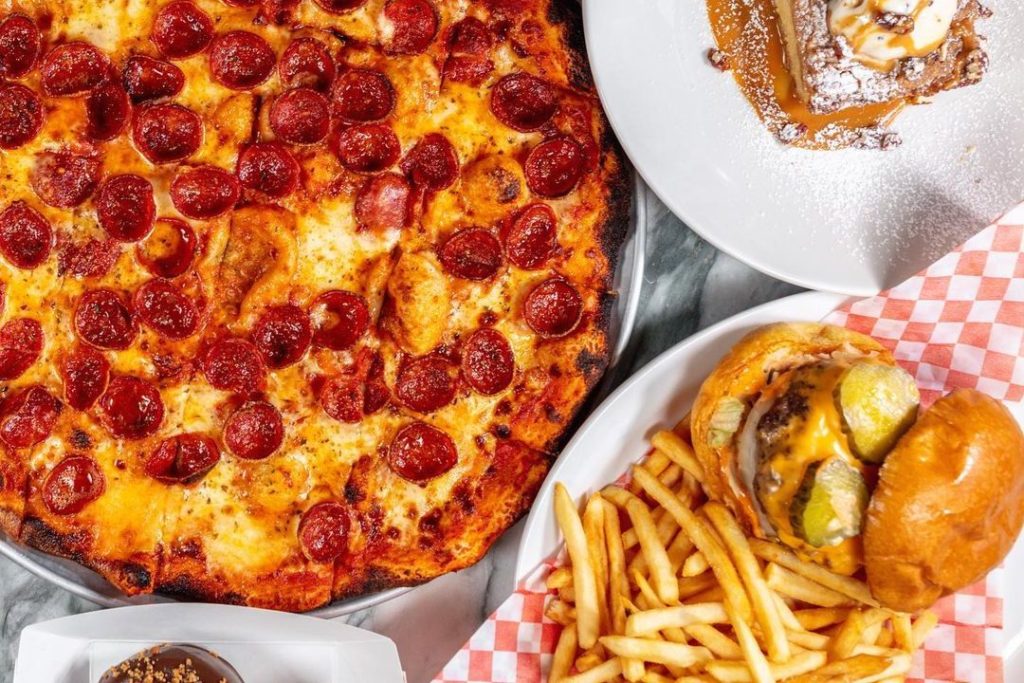 Danny’s Pizza Tavern is the newest player on the block in Toronto’s Little Italy neighbourhood.

Opened in August 2022, Danny’s is the vision of owners Danny Barna, who is a journalist, and his fiancée, Anna Hopkins, who is a writer and director. Helmed by chef Jonathan Pde, who previously worked at Park Hyatt and Piano Piano, this is the couple’s first venture into the restaurant business.

Specializing in pies that are stretched thin and crispy around the edges, Danny’s draws inspiration from the bar pies that are often found in Midwestern U.S. cities like St. Louis or Chicago. Barna says the aim of the restaurant is all about creating a friendly, neighbourhood joint that’s warm, cozy, unpretentious and versatile.

Danny’s Pizza Tavern combines the comforts of a pizza joint mixed with the atmosphere of a local tavern.

“To me a tavern is somewhere that’s welcoming to all,” Barna says. “We definitely don’t see ourselves as a pizza parlour, especially since we feature much more than just pizza. The wines and cocktails speak to that idea of versatility.”

The pizza menu at Danny’s is split into two sections for red pies and white pies. There are five classic red pizzas: tomato, cheese, sausage and peppers and Hawaiian, which features more complex ingredients like fennel and gorgonzola bolognese, as opposed to the typical canned pineapple and shaved ham you’ll find elsewhere in the city. The white pizzas include the cacio pepe, the green pie and the mushroom pie.


“To me there is no such thing as a perfect pizza,” Barna says. “It’s such a subjective thing, with so many different iterations. And while ours may not be perfect, I’d say it’s pretty damn good.”

Pizzas aside, Danny’s also sells a selection of shareable starters like warm olives and a selection of salads, as well as mains like the vinegar chicken or the 7oz Tavern burger. The drink menu is extensive, with roughly 40 wines (reds, whites, sparkling and orange) available by the glass or bottle, and a solid selection of beers, ciders and cocktails, including the classic Aperol Spritz served massive ($18). There’s also Happy Hour daily from 5 to 7 p.m.


Danny’s Pizza Tavern is located at 611 College St. and is open Wednesdays to Sundays from 5 p.m. to late.