For $1,360 you can fly to Japan or eat at one of Toronto's Omakase restaurants
Skip to content 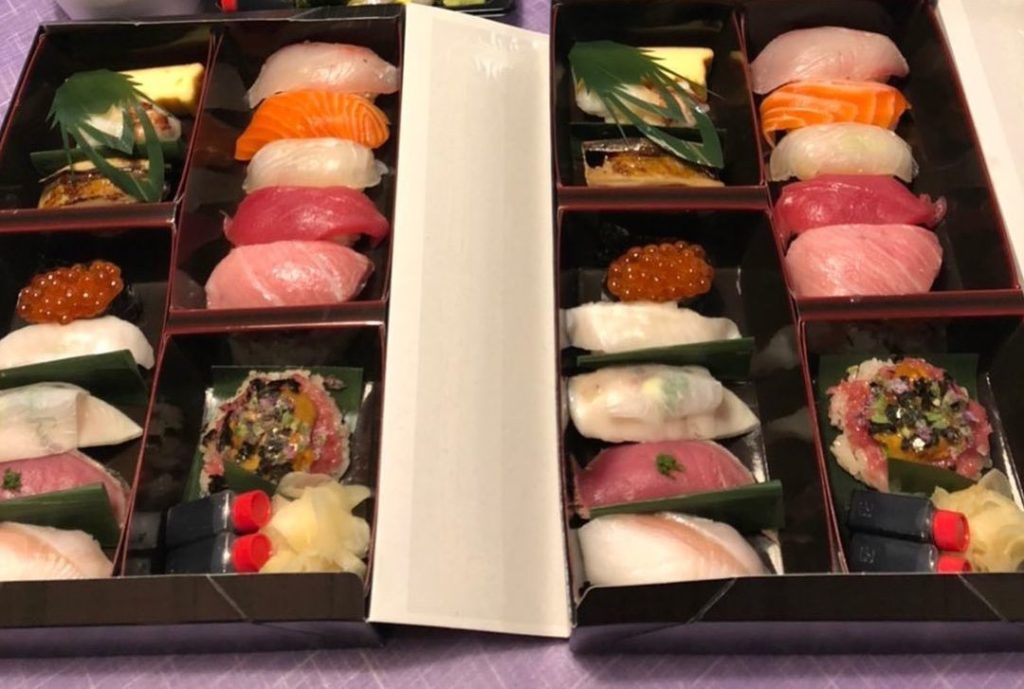 Loosely translated from Japanese, “omakase” means “I’ll leave it up to you.” It’s a sentiment that, when used in fine Japanese dining, evokes the message that the chef has free reign over assembling a creative menu that is aligned with seasonality and the availability of fresh, local ingredients that blend harmoniously course after course.

For sushi enthusiasts, omakase grants the opportunity of sampling the best available option handpicked by the chef. Under the watchful eye and the expert hands of a highly skilled chef, each sushi roll is made to order, often done right in front of the customer to elevate the overall dining experience.

Yasuhisa Ouchi is the owner and executive chef at Yasu Toronto, Canada’s first official omakase restaurant. Born in Osaka, Japan, Ouchi first began making sushi at age 17 as an apprentice for a sushi chef. By age 30, he was back to practicing the art of sushi and in 2010, moved to Canada to open his very first sushi shop, Nigiriya.

According to Ouchi, at the time of his first solo venture, several restaurants in Toronto were doing a version of omakase that included hot foods like tempura and teriyaki, but no establishments were devoted entirely to the art of omakase sushi on its own.

“I started off in Canada with a takeout sushi shop in Leaside that served California rolls and other fusion type sushi, but I wanted the people of Toronto to try traditional sushi like what they have in Japan,” he explains. “While thinking about how to serve the best quality sushi available, I eventually came to a conclusion that I needed to open an omakase-only restaurant that focuses on sushi.”


Since opening Yasu Toronto in 2014, Ouchi says the trend of omakase dining has catapulted in recent years, with guests enlisting reservations as long as one month in advance and in some cases, digging deep in their pockets to foot the bill for just one night out.

“Unfortunately, I feel omakase is becoming a luxurious status lately,” Ouchi says. “Omakase prices are skyrocketing in Japan and even in New York to as much as upwards of $500 per person, like an expensive brand handbag. Everything is amped up; it’s the most expensive ingredients presented in the most entertaining way, but it’s more business-minded. Omakase should be about taste.”

At Yasu, the dining experience lasts for two hours and currently costs $185 per person. A sake pairing (with five sakes) can be added for an additional $80, which are selected to match the daily menu. “It is two hours of bliss – that’s what we try to aim for at least,” Ouchi says. “We all work as a team to make the two hours a special moment for our guests. The 17-course menu is a seasonal presentation consisting of sushi, sashimi, soup and dessert. Upon their final execution, all menu items are served immediately to maximize umami, an ode to appreciating the natural flavour of the delicacy of the ingredients on their own.

In true omakase fashion, guests won’t find a menu listed online, as the ingredients and dishes rotate daily and seasonally. In the spring, for example, Yasu offers firefly squid from the coastal city of Toyama, Japan and in winter, features shirako from Hokkaido. “By offering one focused menu, we are able to devote our time and energy preparing the fish to bring out its maximum umami flavours in our sushi,” Ouchi explains. “It means we can offer our omakase at a reasonable price  because we only order what we need of our precious resources.”

But at Sushi Masaki Saito, another high-end omakase establishment located in Toronto’s upscale Yorkville neighbourhood, the price for the omakase dinner costs almost four times the price of Yasu’s, at $680 per person. It’s currently the only restaurant in Canada with a two Michelin-starred chef, Masaki Saito, who earned the prestigious culinary recognition while working as a chef in New York in 2017 and 2018.


So what, exactly, sets the cost of omakase apart from various businesses across Toronto? According to Ouchi, it’s a tough question, and one that doesn’t always have a concrete answer. “It’s a business decision for each restaurant,” he says.

Aburi Hana is another popular Yorkville restaurant that offers a modern kyō-kaiseki dining experience. Recently awarded a Michelin star in mid-September during the 2022 Michelin Canada Awards, Aburi Hana offers dining guests a traditional Kyōto-style course menu, designed and executed by chef Ryusuke Nakagawa, who grew up and trained as a chef in Japan before moving to Toronto.  Like omakase dining, kyō-kaiseki is an elaborate, multi-course dining experience based on seasonality and the incorporation of local ingredients.

Aburi Hana’s autumn menu consists of 14 courses. Each takes a great deal of time, care and preparation, reflective of the $380 per guest. Sake pairings are available for an additional $160 for a full pairing (eight sakes) and $95 for condensed pairing (five sakes). For wine pairings, Aburi Hana offers guests a choice of five out of eight beverages for the same price as the sake pairings. From start to finish, the entire dining experience takes roughly three hours. There’s a certain element of storytelling involved, as the team illustrates the relationship between the food and guest.


“Kyo-Kaiseki dining is distinct on two levels,” Nakagawa explains. “Specifically, because it’s Kyoto-based, it’s different from broad-based kaiseki in general. Secondly, kyo-kaiseki is constantly in motion because the defining characteristics of this type of cuisine are also always in flux. Seasonality and local ingredients are constantly changing depending on time of year and location and that is part of the beauty of kaiseki. Japanese cuisine is often looked at as being sushi, fried tempura or ramen – and all these things are of course a big part of Japanese food culture, but there’s so much more.”

For Nakagawa, the quality of ingredients as well as their availability are two major factors in pricing out the menu. “The ingredients and technical skill influence the cost of the meal, and the number of hours that go into planning each menu seasonally is countless,” he says. “The ingredients often depend on what’s on the menu, so if we have duck, it will definitely be sourced from Quebec. Fish will most often be sourced from Japan, and from specific regions depending on the item.” At Yasu, fresh fish is pre-ordered from Japan one week in advance to be flown in for the night’s feast–any cancellations must be called in at least 48 hours in advance.


High-end ingredients aside, like Nagakawa, Ouchi agrees that the omakase experience should ultimately convey a sense of intimacy between diner and chef, and not the price tag.

“Luxury is not what we [at Yasu] are aiming for…that’s not what omakase is supposed to be about,” Ouchi says. “I personally think omakase is a great invention; it allows the customers to taste the restaurant’s best food and experience the personality and characteristics of the chef and restaurant.”