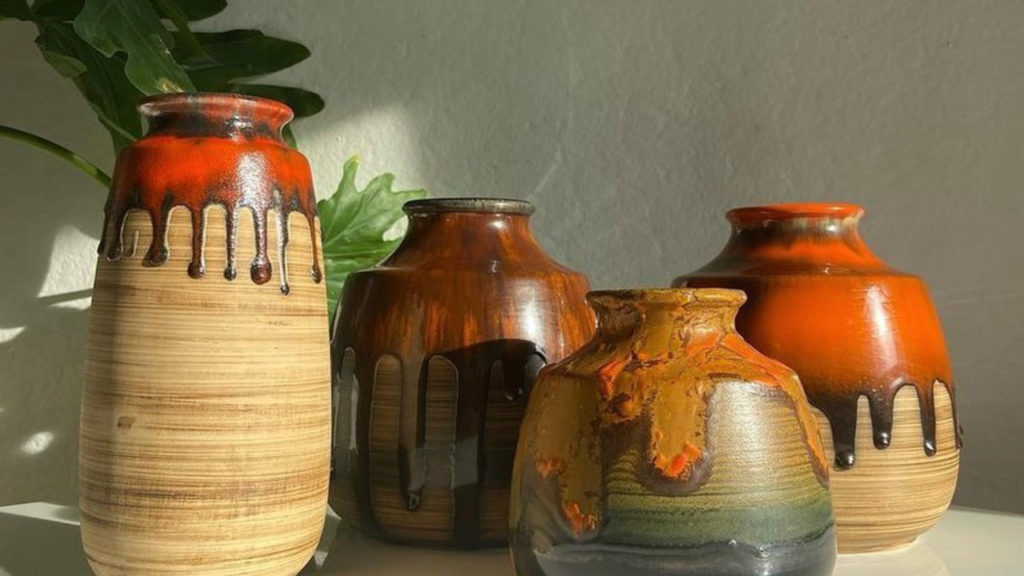 The newest vintage shop to hit what is becoming a secondhand hub in Bloor West in more than just vintage. Ed’s Mercantile, run by Terri Passaretti, her daughter Tatyana and her husband Rob, is a vintage and home goods store that incorporates each of their passions and a whole bunch of Toronto vendors.

“We want to build not just a retail environment, but a community of all handmade and vintage and sort of bring everything together,” Terri Passaretti says.

Ed’s, named after Terri’s father, opened at 605 Bloor St. W. on March 1. The 1,000 square foot space is well-lit and inviting, with a surprising amount of natural light considering that it’s just slightly below ground, and complete with a small kitchenette near the back, “So we can do tea and cookies and things when people start doing classes,” Terri says.

When the pandemic began and everyone was shuttered inside with nowhere to go, Tatyana was unable to continue working as a makeup artist and pivoted to selling vintage clothes online. This venture was immensely successful; so successful, in fact, that she had to rent a studio to house all her merchandise. Meanwhile, Terri had long been running knitting workshops and when everything jumped online, she began hosting them virtually instead. The studio became the perfect place to keep all of Tatyana’s pieces and a quiet place from which Terri could continue teaching. Eventually, the opportunity presented itself to open their Bloor Street brick and mortar location.

“I don’t think I’d do it with friends. I’ve seen too many horror stories,” Tatyana says with a laugh while discussing what it’s like working with family.

“We’re very open with each other, good or bad. So, if there’s ideas that we don’t think are going to work we don’t have a problem saying, ‘We’re not going to do that,’” Terri explains.

It’s this closeness that permeates the warm atmosphere they’ve built, allowing Ed’s Mercantile to quickly become a permanent home for the vintage community.


“We’ve tried to choose people that are unique. We don’t really want to pit vendors against each other, competition-wise,” Terri says. Their vendors fill in the gaps of their own wares, providing menswear, collage, art and assorted home goods, like their very popular Pillsbury dough boy cookie jar tucked into a shelf. Currently, Ed’s houses 35 other vendors apart from the work they display themselves.

One aspect of buying vintage is that the pieces are unique, so you’ll never run into someone with the same faded tee or leather jacket. This sentiment is echoed loudly at Ed’s. Tatyana often sources from Europe and Japan, bringing clothes that would normally be oceans away. However, both Terri and Tatyana agree that they’re not strict with selling just vintage – instead, they’re in favour of supplementing their vintage wares with work created by artists and designers from in and around the city.

Had they simply opened a store for themselves, Terry says they would have lost a lot of what they had at the studio before with teaching and upcycling clothes. Ed’s isn’t only a store where you can update your wardrobe, but it’s also a place where you can pick up a few new skills. A table nestled near the wall of windows at the front of the store will serve as the stage for workshops, which Terri is looking forward to resuming in the coming months. Both she and Tatyana speak eagerly about the work they do and the various skills they hope to share with others. Vendors will also have the opportunity to host their own workshops, as well, emphasizing the cooperative working environment the Passarettis have striven to create.


Upcycling is something both women are passionate about and have integrated into the store’s practices. Tatyana points a black handbag adorned with silver chains on a rack near the register. Terri pulls out an orange Ralph Lauren blazer she’s working on, adding patches and embroidery where it may need some extra care.

Though they have many workshops planned – knitting, upcycling, and formulating your own makeup all lay on the horizon – all focus is trained on the grand opening weekend on April 2, 3 and 4, which is an essential distillation of what Ed’s Mercantile is. With a few of their vendors doing pop ups, drop-in workshops and a DJ spinning some tunes, they’re looking forward to making their welcoming presence known to the neighbourhood. Like Tatyana says, “We just kind of wanted to bring back a sense of community and a sense of friendship. I just feel like it’s something that’s been really lost, and we wanted to bring that back.”