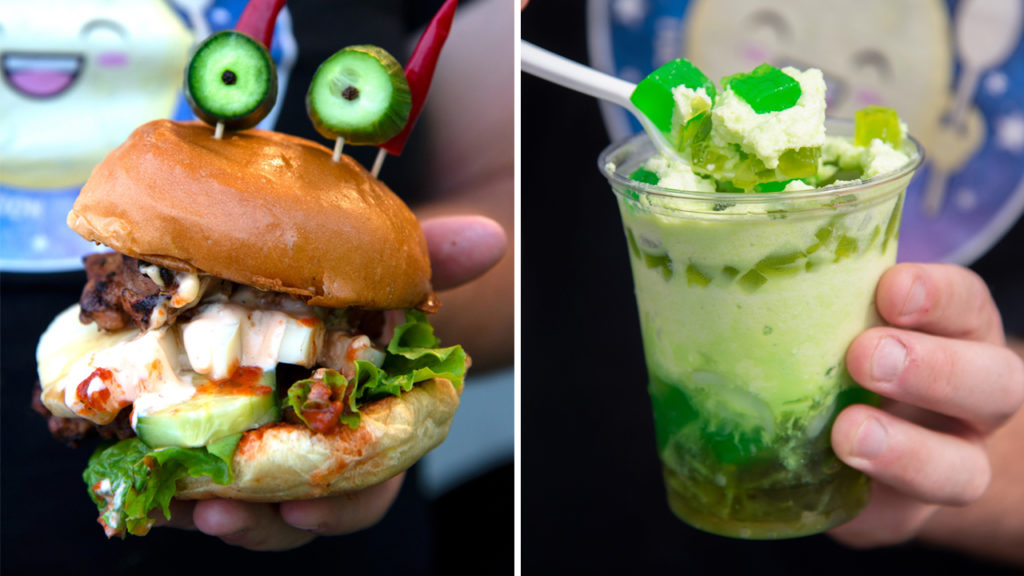 After immense success on the road, The Hungry Moon is taking another huge leap and opening up a space-themed restaurant, bringing its out-of-this-world eats to the heart of Scarborough. This new spot comes in addition to expanding their offerings to include custom catering for your next event.

The Hungry Moon food truck was born out of necessity, after couple and founders Faye Francisco and Chris Threlked both left their jobs at the beginning of the pandemic. The clever moniker was dreamed up by their daughter, Luna, and the food truck was an instant success, zooming along Toronto’s roads and highways, operating across the city and beyond.

You may have spotted the truck, adorably wrapped in a cartoonish, galactic print at various festivals and markets all over the GTA including Pumpkin Fest, Burlington Food Truck Festival, Vegandale Festival, Street Eats Market, Night Market in Mississauga and even the 90s Nostalgia Outdoor Concert.

Faye studied at George Brown College and has spent years working in restaurants, most recently employed as Head Chef at Diana’s Oyster Bar & Grill. One of her first jobs was working in celebrity Chef Claudio Aprile’s restaurant. She recalls fondly her time working in his restaurant, remarking how much she learned under his wing.

“At first, I was scared and intimidated by Chef Claudio because I was new to Canada, studying at George Brown and working at his restaurant. Our first encounter I thought he was a customer, because he was yelling at all the cooks, like Gordon Ramsey on Hell’s Kitchen,” Chef Faye said.

“Then I saw him cooking and checking all the orders before going out, and I realized he was the head chef. He took a look at my dishes, stopped the whole kitchen, and said to everyone ‘this is how the food should look,’” she recalls fondly. Faye believes his guidance in those early days of her career set her on the course to become her own Head Chef – and now, those dreams are becoming a reality.

Fans of the food truck can expect a similar menu of Filipino spins on Canadian comfort food like the cosmically-named Solar Eclipse Meat-eor which is a chicken BBQ burger loaded with spinach, sautéed onions and frico (fried cheese wheel). Faye also serves up a ton of veg-friendly options inspired in part by her co-owner and husband, Chris, who is a long-time vegetarian. In fact, while the restaurant was being built, Chef Faye used the kitchen to create new dishes made specifically for vegans at Vegandale Food Festival.

The vegan community fell in love with The UFO and the Prawn Nebula so much so that the team decided to add a special section for vegans only on their food truck and new restaurant menus.

“This restaurant allows me to let out my inner most creativity, with space to create new dishes that people will fall in love with,” says Chef Faye.“With a food truck you have some restrictions. This restaurant gives me the opportunity to let my imagination run wild.”

The interior of the restaurant echoes the cosmic wonder of the food truck, with Moon crater walls, star-studded design treatments, glow in the dark stickers and a mural of the couple’s daughter and two dogs – an artistic reminder of who they are working so hard for. Every detail is on theme, down to the colourful brioche buns which are homemade and uniquely moon shaped – the perfect vessel for their burgers and sandwiches.

The grand opening will be on Saturday, Nov. 27, 2021. Swing by the 4190 Kingston Road on opening day for some extra goodies like coupons, free tastings, and more!