Foraging in the Don Valley: less wacko than it sounds - Streets Of Toronto
Skip to content 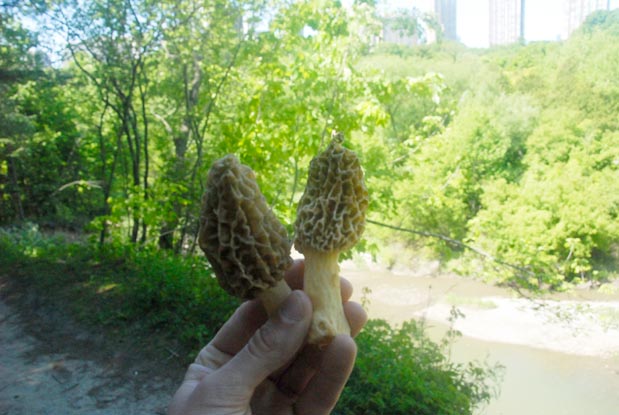 For those who aren’t familiar with the Don Valley, it’s easy to think of the place as a hobo-riddled wasteland, vaguely forest-like, where the wildlife — if it can be called that — subsists off the rampant urban refuse. Which is probably why, when I told people that I was going to forage for food there, a common response was, “Ugh.”

But I now know that the Don Valley is a perfectly viable place to harvest wild edibles. In some areas, the Don River is clear more than it is brown, and I even saw a totally non-mythical creature known as a “deer” out there.

Over the weekend I took part in an introductory Don Valley foraging tour, along with around 30 others, hosted by The Culinary Adventure Company. Scott Savoie, a chef and co-founder of the tour group — which hosts a number of food-related tours throughout the city — organized the excursion. Savoie has worked as a private chef for several interesting characters, including Jeff Foxworthy, and he also knows how to open a bottle of champagne with a sabre, which officially makes him the kind of guy you want to have around.

Our guide was Grant Bouchard, an avid forager and a member of the Mycological Society of Toronto. Bouchard knows of several lucrative foraging spots in the city, and he decided to share one of them with us. Generally, foragers aren’t so willing to divulge their good spots, but Bouchard says that if people want to forage, he might as well show them how to do it sustainably. Grant Bouchard, foraging guide, finds a morel just off the Don Valley trail and cuts it open to
reveal the hollow interior

During the spring, the Don Valley is rife with fiddleheads (edible baby ferns), ramps (wild leeks), morels (extremely tasty mushrooms) and other snacks. This particular tour was bit too late in the season for fiddleheads, but morels were still game.

I had never partaken in a mushroom hunt before, but had wanted to for a long time for the simple fact that mushrooms are fascinating. It’s difficult to overstate their greatness. They have names like black trumpet, dryad’s saddle and devil’s cigar, all of which are way better than my name. If you want to take an intergalactic spiritual journey, certain mushrooms can help you accomplish that. If you mess with mushrooms, they can kill you. And in case you missed it, mushrooms are some of the best-tasting organisms on this planet.

Savoie and Bouchard escorted our group to the site of an old, decaying apple orchard somewhere in the Don Valley. Participants were asked not to disclose the precise location in order to prevent overharvesting, which, Bouchard says, is a serious problem: recently, he came across a fern patch that was decimated by overeager fiddlehead foragers.

Morels enjoy old apple trees; they also like oak trees and, rather inconveniently, poison ivy. They are also one of the first signs of rejuvenation after a forest fire (if you’re jonesing for morels, go to High Park after a controlled burn). Morels are some of the best mushrooms for novice foragers because they are so easy to identify. They do have one toxic doppelganger — known as the false morel — but those are also easy to identify because they aren’t hollow inside, like real morels, and they are decidedly uglier.

Sustainable foraging, it turns out, isn’t so complicated. Bouchard’s tips consist of the following: don’t take more than a third of what you find, and, if possible, don’t disturb root systems (if the foraged item is a mushroom, don’t pull out the whole thing — cut off the tasty part and leave the base).

En route to the old orchard, we made a few stops to learn about different kinds of mushrooms that grow in the Don Valley. We learned about the edible hen of the woods, and we learned about the inedible dead man’s fingers, which look like the digits of some undead creature digging its way out of the grave. We learned about dryad’s saddle, which grow out of logs and are edible, preferably when they’re young and tender. I ended up stumbling across a beautiful patch of these, and I cut off a sizeable cap to take home. It smelled like watermelon. A patch of dryad’s saddle and a harvested cap

That was to be my best find of the day. After reaching Bouchard’s preferred morel site and scouring it, I didn’t find a single morel. Others were successful: one couple found around 15 of them. I had heard that mushroom hunts are meditative, and I got that for a few minutes, being out in the woods and all. Then I got anxious. Nobody wants to be that guy that didn’t find a single morel.

I’ll probably head back to the Don Valley to try my luck again before morel season is over. After my first forage, though, I had to be content with my sole specimen of dryad’s saddle. I took it home, chopped it up and sautéed it with some butter and a bit of brandy. Added salt and pepper, and grated some Parmesan on top. Certain portions were too fibrous, but the outer edges were soft, with a mild woody taste. Verdict: I’d eat dryad’s saddle again. The Culinary Adventure Company is hosting another Don Valley forage in October, where the sought-after items could include mushrooms such as hen of the woods, oyster mushrooms and bear’s head tooth (which tastes like crabmeat, I hear).

In the meantime, morels are common in scattered pockets of the Don Valley, and now would be a good time to seek them out: if there’s one thing they like, it’s moisture.