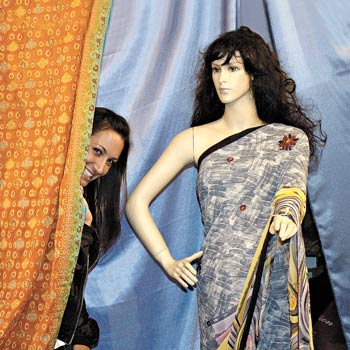 I’M ON GERRARD street east in the heart of Little India, dazzled by the sights, sounds and smells of this vibrant east end shopping district.

As I walk, I’m accompanied by the beats of popular Hindi songs echoing between the storefronts. My guide to all things Little India is Little Mosque on the Prairie’s Sitara Hewitt, who has offered to show me her favourite area haunts. We meet at Lahore Tikka House (1365 Gerrard St. E.), famous for its Pakistani and North Indian cuisine, and settle in to talk about the neighbourhood, the upcoming fourth season of her hit CBC show and food, of course. “This place has the best Indian food,” she enthuses. “The butter chicken here is the most amazing dish in the world, and it comes on a sizzling frying pan — you just have to try it.”

The restaurant is decorated with swaths of fabrics draped on the walls, and lit with festive strands of lights that zigzag across the ceiling. Manager Rohit Verma says that the secret to the location’s continuing success is a diverse clientele, with customers from all over the city returning regularly for their signature lamb curry and kebabs.

“When we started it, it was just a 20-seat restaurant,” he says. “Now we’ve become so popular that we are opening a brand new restaurant building next door for 1,000 to 1,200 people.” As for Hewitt, she’s busy with preparations for Little Mosque’s new season and looking forward to reuniting with her onscreen family.

“It’s the best place to go back to work,” she says. “It seems to be one of those shows that just has a really good chemistry. There’s not one department that lacks. You go to work there and it’s like, ‘OK, this is my dream job.’”

She says that she is honoured to keep playing Dr. Rayyan Hamoud, the half Lebanese, half Canadian Muslim, feminist doctor character living in the fictional prairie town of Mercy. It’s a role that has had a positive impact on viewers and beena strong role model to women and young girls.

“I get a lot of fan mail from Muslim women saying, ‘Thank you for portraying this character,’ and a lot of girls saying, ‘Your character makes me feel that it’s okay to be me,’” she says. “It’s a really cool thing to be part of.” The first seed of this lively Toronto area was planted in the early 1970s, after entrepreneur Gian Naaz decided to convert the then-idle Eastwood Theatre into a go-to Indian film destination. The theatre took off, and soon people from across the province were lining up to watch Bollywood flicks at the revived venue. Today, the sixblock stretch between Coxwell and Greenwood Avenues houses more than 100 shops and restaurants, which sprang up to cater to the influx of movie-goers.

We walk east to Maharani Fashions (1417 Gerrard St. E.), a one-stop shop for saris, Punjabi suits and textiles while also being home to one of the best selections of costume jewellery on the street. I find an entire wall of glittering bangles in every colour of the rainbow, intricately beaded necklaces and delicate, bejewelled earrings.

“I used to come here to buy all my jewellery,” says Hewitt. “I’d bring my girlfriends and we’d all buy armfuls of bangles.”

For Hewitt, who moved to Toronto at 19 from small-town Ontario, visiting Little India at that time was a revelation. “I remember moving here from Elora where the only time I could get curry was if my mom cooked it or if we went to Pakistan,” she says. “And here — I’d never seen anything like it before — people were speaking Urdu and Hindi on the street and there was Bollywood music blasting everywhere.” We move on to next door’s Maharani Emporium (technically also at 1417 Gerrard St. E.), a store packed to the rafters with giftware, garlands, religious items and vivid silk paintings. We weave between the shelves of carefully arranged statues, carvings and musical instruments, as Hewitt searches for the perfect incense burner.

“I love these,” she says as she leafs through a stack of bright posters depicting Hindu gods and goddesses. “The colours are just amazing.”

We end our tour with a stop at Lahore Chaat and Paan House (1386 Gerrard St. E.), a cozy café that holds a special place in Hewitt’s heart as the first she ever visited in Little India. Inside, you can find a wide variety of savoury snacks like bhel poori (puffed rice with potatoes and tamarind sauce) and chaat papri (fried dough wafers with chick peas, chilis and yogourt).

“It’s run by this really lovely couple,” Hewitt says. “I got to practise my Urdu here for the first time with the wife, and my mom and I have a tradition of coming here for their Kashmiri tea.”

Though she now divides her time between Toronto and Los Angeles, Hewitt says she often returns to the area to visit her parents and the neighbourhood she fell in love with as a teen. “I felt like here I found a community a half a world away from it’s origin, and the culture is being celebrated every single day.”