Three new hotels for your next Toronto staycation
Skip to content 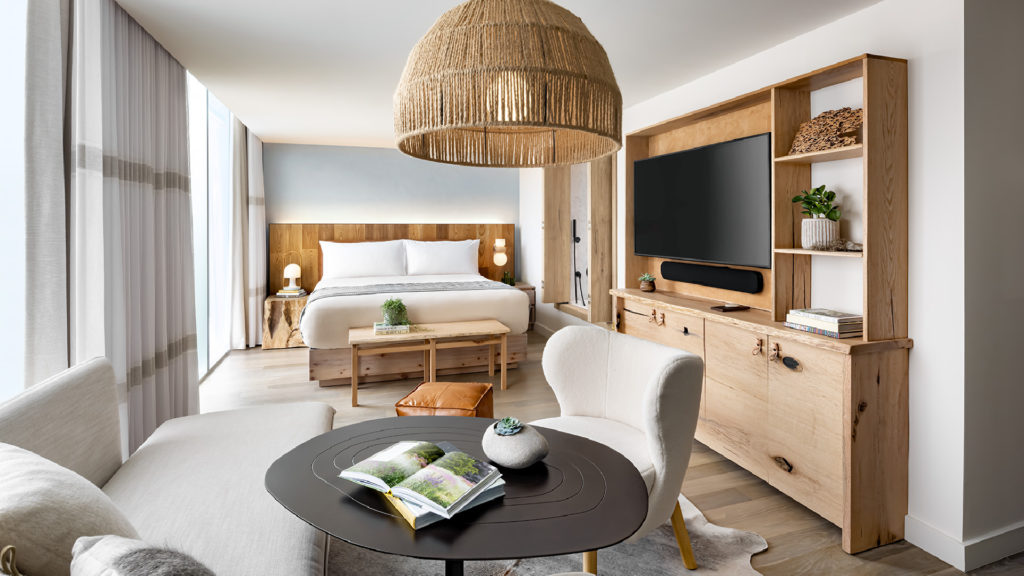 As Toronto emerges from the pandemic, the city’s hotel scene is coming back with a bang as many new and newly-renovated hotels make their long-awaited debuts. Whether you’re ready to dip your toes into the world of travel again with a local getaway or are simply looking for a break from your day-to-day routine, these latest and greatest hotels have you covered for a relaxing Toronto staycation – and wifi at the ready in case you’re looking to make a long weekend of it without taking another day off. After closing in 2019 to undergo renovations, the Park Hyatt has returned with a fresh new look courtesy of design firm Studio Munge. Originally opened in the 1930s, the Park Hyatt’s makeover pays homage to the property’s heritage with art deco elements while also creating a sense of place with Canadian touches. Locally-inspired features include artwork from notable Canadian and indigenous artists, including a new public art sculpture by An Te Liu.

The Park Hyatt’s 219 guest rooms offer a home-away-from-home ambiance and handsome decor (that’s likely fancier than your own abode). A spiffed-up spa is still in the works but in the meantime, guests can check out the 17th-floor cocktail bar, the Writers Room, which offers beautiful views over the city. The stunning new Joni restaurant offers bistro-style fare with an emphasis on seasonal ingredients, along with classic cocktails and a wine list curated by an in-house sommelier. Previously known as the SoHo Metropolitan, the rebranded SoHo Hotel has been a favourite of well-heeled travellers and visiting celebrities for almost two decades.  Fresh off of a multi-million dollar renovation, the hotel’s revamped guest rooms are modern and refined, featuring 80 square feet dressing areas with Canadian maple millwork. Many rooms also feature artwork depicting old-style Canadian currency as an additional nod to the hotel’s local roots (you’ll also see these pieces in the corridors).

The SoHo’s saltwater pool, steam room and fitness centre were also spruced up during the renovation. The gym, which features floor-to-ceiling glass windows and an outdoor terrace, is managed by two-time heavyweight champion Dalton Brown, who has previously trained famous figures like Carrie Underwood.  The glam Moretti Restaurant, the first Toronto location of the successful Montreal chain, is no run-of-the-mill hotel eatery, featuring an open kitchen with a pizza oven and a buzzy dinnertime ambiance. With a focus on sustainable practices, 1 Hotel offers a Toronto staycation that blends luxury amenities with an eco-conscious ethos. The property strives for zero-waste operations, with the goal of diverting over 85 per cent of its waste from landfills. Some of 1 Hotel’s green on-site initiatives include a composting program and a partnership with GreenPlant that sees 100 per cent of its kitchen oil and grease converted into biofuel.

Designed by the Rockwell Group, the hotel’s upscale interior draws inspiration from the environment that it hopes to play a part in preserving, incorporating reclaimed natural materials like driftwood and local limestone. Rooms and suites feature organic cotton linens and bath products, as well as in-room water filtration systems aimed at minimizing the need for single-use plastic water bottles.

Guests can chill out at the hotel’s rooftop pool, which offers sweeping views of the Toronto skyline, or dine at one of five on-site restaurants, including the hotel’s signature venue 1 Kitchen. Each restaurant offers a different menu concept, but a dedication to locally-sourced fare, including ingredients grown in an on-site garden, is a theme throughout.