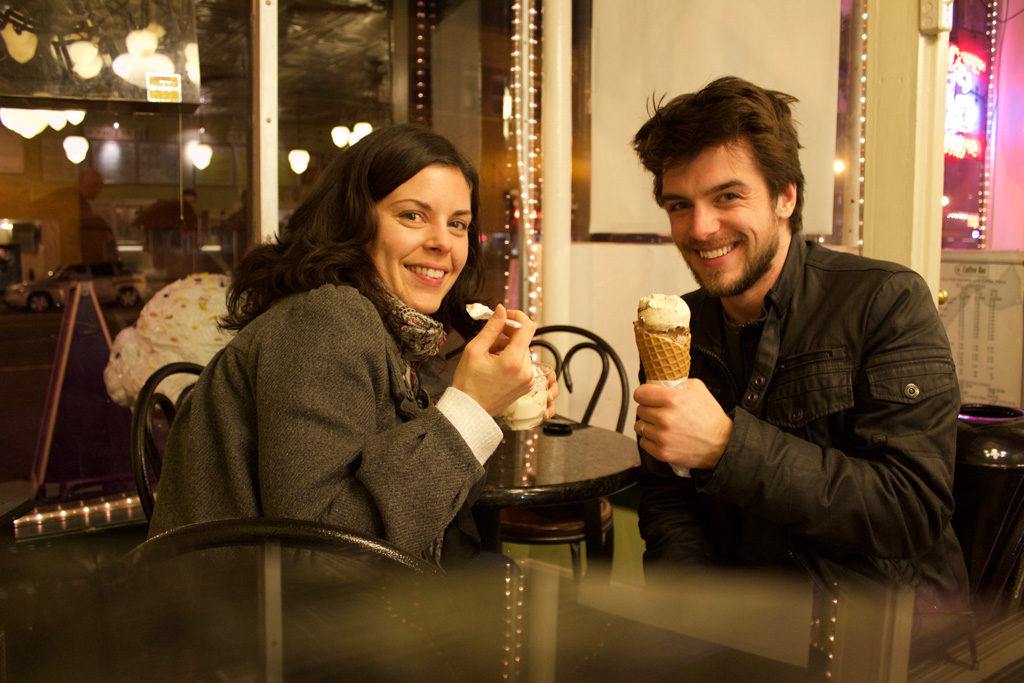 Dan Jeannotte, from CW’s Reign, the Assassin’s Creed video games and The Hallmark Channel’s Good Witch, fell in love with his wife, voice actor Heidi Hawkins, in the most predictable way — onstage playing strangers who fall in love.

Dan Jeannotte: “Heidi and I were both cast in a Shakespeare play, As You Like It — one of his comedies where complete strangers fall in love in the space of a few lines of dialogue. There was instantly something between us. But we couldn’t admit it because we were actually both in relationships at the time. Our characters get married at the end of the play, and we shared a kiss onstage. Somehow that kiss seemed to get longer during every performance. Years later, the director who cast us in that show was the officiant at our wedding.”

DJ: “For a long time, neither of us thought that marriage was something we wanted. One weekend we were in Saint-Sauveur, a lovely ski town north of Montreal. We were talking about the future. Should we stay in Montreal? Move somewhere else for our careers? Heidi said, “You know, if we’re going to move to another city together, if we’re going to change our whole lives together — maybe we should just get married.” This was the first time we had spoken seriously about marriage. I said, ‘Are you being serious?’ A few days later, I called her father, told him we wanted to be together forever and asked for his blessing. He gave it happily. Our wedding was five months later.”

DJ: “Our wedding was at a Montreal museum that actually used to be a public swimming pool back in the ’30s — art deco style, with beautiful vaulted ceilings — but that’s been totally redone with hardwood floors. So we got married in the deep end.”

DJ: “We went on a fantastic honeymoon a few weeks after our wedding that fulfilled a longtime dream for both of us: a month-long U.S. road trip.”

DJ: “Heidi was due right around the time when we were shooting the most recent Good Witch TV movie. I spent a week and a half on set, obsessively checking my phone for any news from Heidi. Finally the shoot was over, and there was a month-long hiatus starting on a Tuesday. Our son was born on Wednesday, 10 days past due! So either Heidi held him in until my schedule was all clear, or this little boy just has a great sense of timing.”

DJ: “We moved from Montreal to Toronto when I was accepted into the Actor’s Conservatory at the Canadian Film Centre. We first moved to Leaside — mainly because we found a great apartment there, and it was close to where I was studying at the CFC. We liked it there, so when we needed a bigger apartment to make room for the baby, we looked for something nearby. We found a great spot in East York. There’s lots of young families in the area, and we’ve made some great new friends there.”

Goals for the future

DJ: “We live on a farm in the Napa Valley. We have 26 dogs, one for each letter of the alphabet. We own a souped-up RV, and we spend a few months every year on a road trip.”