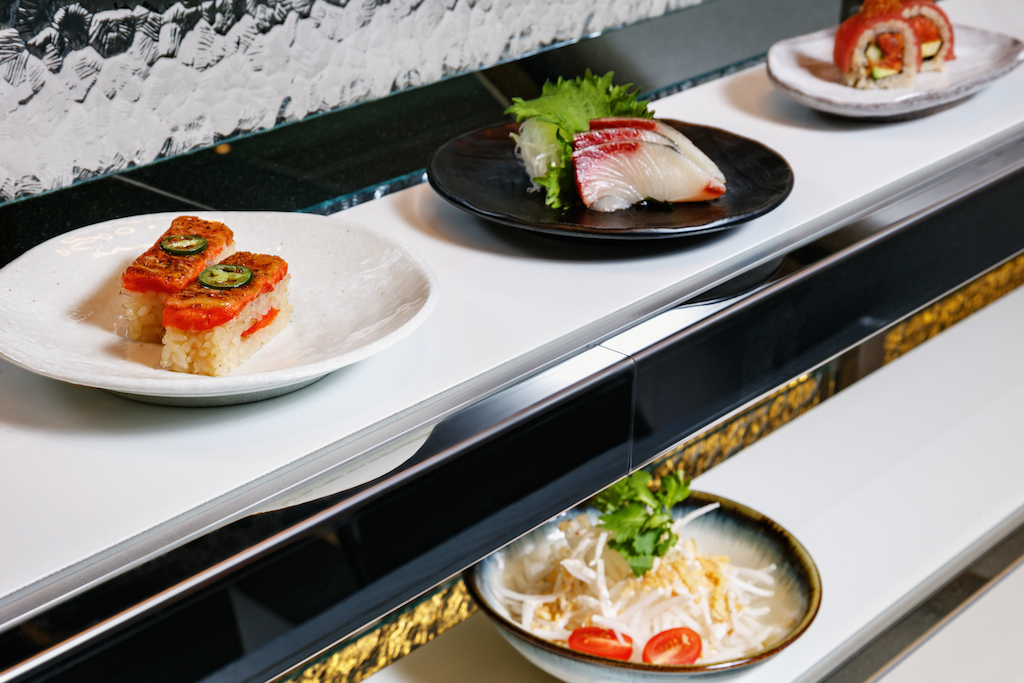 Tora, the newest venture from Aburi Restaurants Canada (the team behind Miku Toronto and Miku Waterfront in Vancouver), has just opened in Yorkdale Shopping Centre. This concept is a twist on the classic sushi train: Instead of grabbing items off a rotating track you select made-to-order items with the tablet that’s on each table. Scroll through the touch screen menu adding items to your order.

A few minutes after being sent to the kitchen, fresh handmade sushi arrives via the two-tiered sushi laneway that runs alongside the seating. Other diners’ dishes zip by (at a reasonable speed), but your order comes to a controlled stop by your tableside. Lift the dish off the track and enjoy. There’s also table service in the lounge area if living in the fast lane isn’t your style.

Of course the menu includes the torched aburi-style sushi that’s so popular at Miku, plus nigiri, sashimi, rolls, a wide array of hot and cold dishes and dessert. There’s also a number of well-thought-out vegetarian options like miso tofu inari ($3), and an eggplant nigiri that actually has a buttery-soft, tuna-like texture ($3.75).

The menu was a labour of love for Kazuya Matsuoka, Aburi Restaurant Canada Inc.’s COO and Corporate Executive Chef. “I really want to make sure that people receive a quality product,” he says. To set Tora apart from myriad other upscale sushi spots he developed a sushi style he calls EdoPrime.

“I’m excited to announce to EdoPrime nigiri,” he states. “We use the shari [red sake] vinegar that has a rich umai flavour that matches with the Japanese fish,” he explains. “It’s served at skin temperature and the rice has to be a nice texture–not too hard–so that it all melts in your mouth.” Each piece of nigiri is brushed with sauce, and depending on the fish, scored to enhance the flavour. While there are bottles of soy sauce on the table, chef recommends you try the sushi without it.

There’s also sake, Japanese beer, green tea and other drinks on offer, but the Japanese melon cream soda ($4.95) is definitely worth a taste for the exciting combination of flavours.