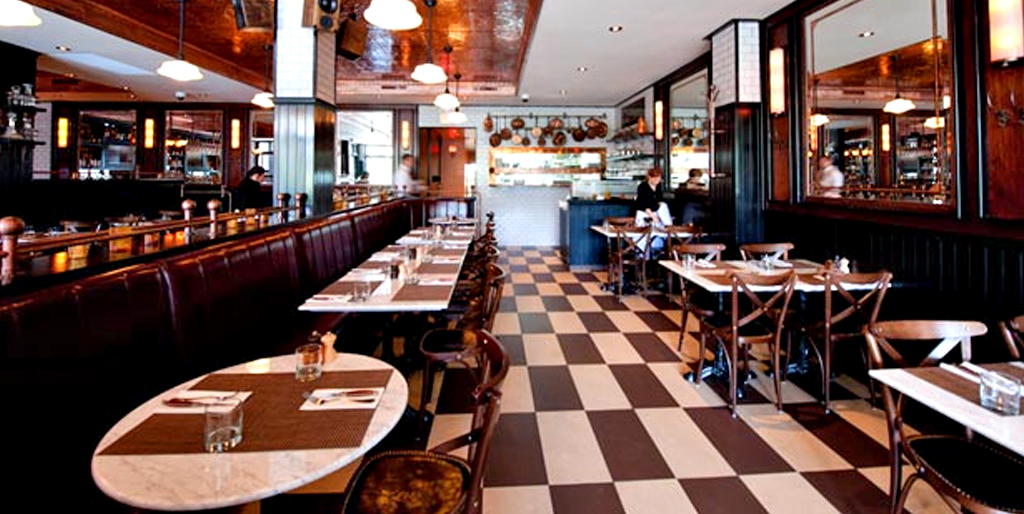 Overlooking the Royal Ontario Museum’s crystal, Museum Tavern, tucked upstairs above Over Easy, has opened as a play on the classic American tavern. Behind it are restaurant veterans Kyle and Glen Kristenbrun, whose father, Tom Kristenbrun, was the owner of the now-shuttered Bistro 990 and other Toronto institutions such as Bemelmans (now a Hugo Boss) and El Mocambo.

Although Museum Tavern’s name is an obvious play on its location across from the ROM, inside, the young Kristenbruns have brought to life pieces of their father’s legacy.

On the back wall, by the kitchen, the old Bemelmans sign hangs above copper pots. At the front sits an antique cash register, along with two deer statues that will be recognized by anyone who frequented Bemelmans in the ’70s and ’80s. In the dining room, an old autographed concert poster from a Rolling Stones show at the El Mocambo is mounted subtly to the wall. The warm, brasserie-like space was brought together by Harvey Cowan, and features copper-plated tin ceilings, dark banquettes, white subway tiles and checkered floors.

In the kitchen, chef Stephen Gouzopoulos, previously of Yorkville’s L’Unità, is offering a menu of American brasserie classics with an international twist. For starters, there’s lobster rolls ($18), stuffed chicken wings ($16) or duck buns ($12) — a fun play pork buns. As far as standards go, there’s soup ($8), salad ($8-$16) and “torpedoes,” or sub sandwiches, such as spicy sausage ($15), pulled lamb ($15) or quinoa-crusted tofu ($14).

For mains, there’s steak frites ($22), a Canadian prime beef double cheeseburger with fries ($16) or larger plates like lamb sirloin ($29), a Tamworth pork chop ($27) and — of course — a half roast chicken ($26), which some patrons are saying outshines Bistro 990’s famous chicken.

Behind the drink and cocktail program is the well-known Moses McIntee as head bartender, who, along with fellow bartenders Troy Gilchrist and Mike Crispo, is boasting an ambitious 40-plus single malt whisky list that’s aiming for 100-plus by fall.

The cocktails reflect the caliber that McIntee is known for, which means you’ll soon see liquid nitrogen behind the bar. Reminiscent of a great American bar, Museum Tavern offers 2 oz pours for all cocktails, including the house cocktails ($12), such as the apricot bourbon sour, the French tonic or the bitter Mexican mule; seasonal classics ($12) like mojitos and caipirinhas for the summer; or oak-aged classics ($14) like negronis, Manhattans or sazeracs, which are aged in oak barrels and bottled in-house.