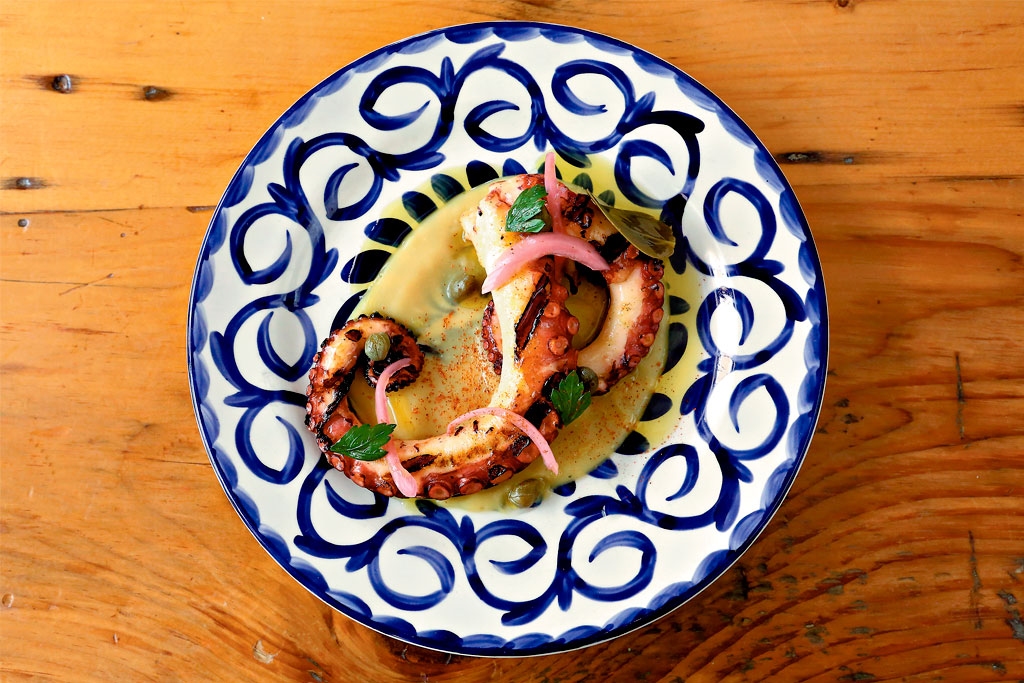 At the southern end of the Ossington strip, Mamakas serves elevated, rustic Greek fare, or "modernized trad Greek," as food critic Joanne Kates has described it. The menu, according to owner Thanos Vrettakos Tripi (above), is meant to honour the “extremely authentic Greek” recipes he grew up with “because we had my grandmother living with us.” His background includes relatives from Mani at the very southern tip of mainland Greece, and his maternal grandmother who was from a Greek community on the Turkish side of the Aegean Sea. Anwar Mekhayech of The Design Agency helped Tripi convert the space, formerly The Ministry of the Interior design shop, into an 85-seat restaurant. The white walls and large windows give the room a bright, sunny feel. A back-lit mural of karagiozis—Greek shadow puppets—was specially commissioned for Mamakas, and adds a dash of personality to the main section of the dining room. Popular dishes like the Imam Bayildi, an eggplant-based appetizer, and whole, grilled fish, are meant to be shared as though diners are gathered around their family’s dinner table. There is also a focus on seafood, like the Shrimp Saganaki above, and vegetarian dishes that can be seen in the board of “Market” specials. Mamakas’s drinks program keeps closely to the theme established by the food. Wines, including several by-the-glass options and bottles of white, rosé, red, and sparkling are all Greek. For beer they have the familiar Fix lager and two bottles from Santorini’s Volkan craft brewery (above), which are infused with Santorinian honey. Opa!