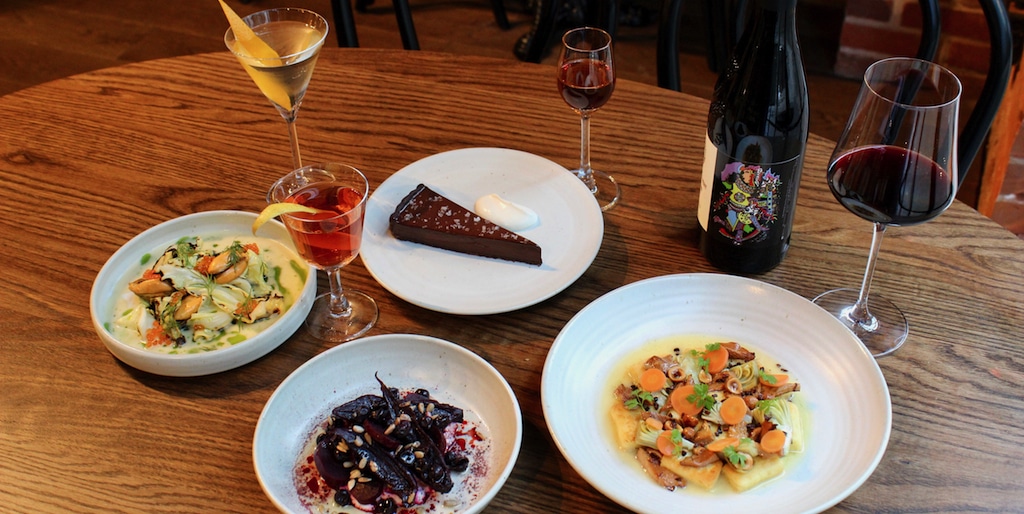 “I think when word gets out in Toronto that there’s a group of people wanting to do something really special, it tends to draw out the best in the business,” says director of operations Niall McCotter. “I think we’ve gathered a team of some of the best in the city.” With a constantly changing menu sourcing seasonal, locally available ingredients and a rotating list of small-batch wines and champagnes by the glass, no two visits to Lapinou can ever be the same.

“When you have an abundance of creativity, which our team possesses in spades,” Niall continues, “binding them by tradition is unfair to them and to the restaurant. I get really excited that every day, every week, we’re probably going to introduce some new things based on the product that’s coming in and what chef wants to try next.” One of the team’s favourite aspects of Lapinou’s experience-meets-experimentation ethos is their prixe fixe brunch every Sunday from 11am – 3pm. For $35/person, each table receives four plates of appetizers and a choice of one entrée per person. Sommelier Lauren Hall also selects several wines and champagnes for a half-price wine list each Sunday, which makes for an experience that’s equal parts accessible and decadent. Atop a bed of in-house fromage frais made with jersey cream sits Lapinou’s beet dish ($14) that features two styles of preparation: the rounds are acidulated in their own juices, while the longer pieces are dehydrated for 6-8 hours for a chewy texture and earthy flavour. The dish is finished off with black currants and sunflower seeds. The mussels ($16) are presented in a beautiful tangle of hispi cabbage grilled over Japanese charcoal and served in a beurre blanc with dill and trout roe. The gnocchi ($22) is made in the Parisienne style of using choux pastry instead of potato as a base. The choux is shaped, poached, set, and seared before plating with artichokes, fermented carrots, hazelnuts, cacao nibs, and vin jaune.

For dessert, the chocolate tarte is topped with Maldon salt and accompanied by a delicate dollop of sesame cream. Don’t miss the chance to pair it with a glass of coupe de la maison ($8); with dark rum, green chartreuse, Averna and falernum, these two are a match made in after-dinner heaven.

General manager Lauren Hall is also a celebrated Sommelier, and while it might seem tragic that patrons will fall in love with a wine they might not have a chance to purchase again, Hall is excited about the variety of small-batch wines the program is going to bring to Toronto’s table.

“A thoughtful, rotating wine menu keeps me, our staff, and our guests engaged,” says Hall. “We’re working with small suppliers and exceptional winemakers, so often we can only get 12-18 bottles.”

The cocktails are less of a flight risk, though it’s still safe to assume that there will always be something new for patrons to sip at Lapinou. The Avignon ($15) is a delightfully airy and refreshing mix of gin, lillet and fino sherry. Toronto-based design company Model Ctzn certainly had some beautiful bones to work with in this King West space, and luxurious jewel-toned green couches stretch out along exposed brick walls illuminated by chandeliers and hanging bulbs. A statement bar sits in the centre of the space creating a sense of distinct dining areas in the open-space concept, ensuring every patron feels in on the action while enjoying an intimate dinner at their own table. “Our main focus,” Hall explains, “was to build a restaurant with amazing food, great wine, and great cocktails that we ourselves would want to go to. It’s found its own identity on [King West] and that’s the best thing we could ask for.” Posted on Nov. 26. By: Saliha Chattoo