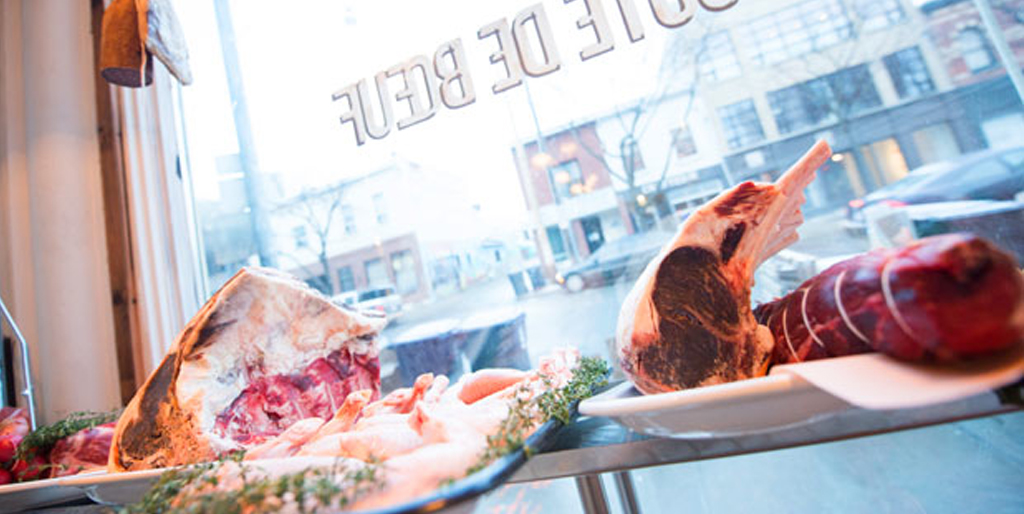 Opened on Ossington is the European-style Côte de Boeuf, a project from Chasen Gillies and Teo Paul of the nearby Union restaurant. The store, previously a flower shop, bills itself simply: “select grocer, butcher, meals.”

From the outside in, Côte de Boeuf looks like a European butcher shop of old: cuts of meat hanging out front, plated goods at the window and a butcher’s block is visible too. The interior is decked out with tiled ceilings, and custom cabinetry holds ready-to-go meats, whole chickens, duck fat and smoked meats and fish.

From the pantry, there are homemade sauces, favourites like Kozlik’s mustard and seasonings to complete a meal. Behind the counter, you’ll find daily-prepared foods, meat pies, hot sandwiches, charcuterie, foie gras, potato salad and meals for a quick bite at the counter or to go.

Breaking down the animals in the back is butcher Michael Greenberg, previously head butcher and product consultant at Union restaurant, who learned his trade under Ryan Donovan (of Richmond Station, and previously of Marben).