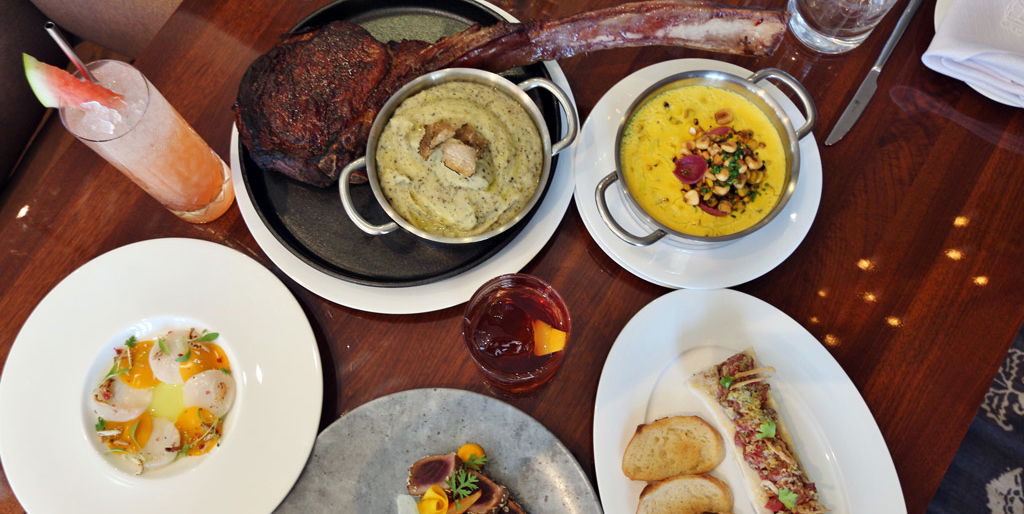 How does a 103-year-old castle regain its relevance? Liberty Entertainment Group’s answer is Blue Blood, a steakhouse which includes a stunning bar and lounge (in Casa Loma's Oak Room & Smoking Lounge) and lavish dining room (in the Billiard Room).

Its name refers to both Sir Henry Pellatt, Casa Loma's original owner, and a to the fine cuts of steak that can be found in this 140-seat dining room. As well as the spaces indoors, the restaurant will soon be home to a world-class patio with one of the most spectacular gardens in Canada. It takes 30 - 40 staff gardeners to maintain the greenery and once completed, will add another 80 seats for al fresco dining.

The project was conceptualized in 2005 when the Liberty Entertainment Group was catering events at the historic site. “The city was looking to engage outside of tourism and having a restaurant inside a castle could do that,” says CEO Nick Di Donato. The design was “almost like set design,” the masterpiece of Nadia Di Donato, the creative director for all of the group’s venues. “A steakhouse resonated well with the character and heritage of the castle,” adds Di Donato. While most of the castle’s original contents were sold at an auction in 1924, about 5 - 10% of the collection remains on site.

The space also houses modern “royalty” with a Purple Reign painting of Prince and a painting of Queen Elizabeth II by Mr. Brainwash. “We wanted to add contemporary art to juxtapose a modern feel to the facility,” says Di Donato. There are also two pieces of artwork commissioned by Andy Warhol of iconic Canadians, former hockey great Wayne Gretzky and ballerina Karen Kain as well as a centennial nickel dubbed the Liberty nickel, a nod to the group’s name. Other design highlights include Calcutta marble lining the walls of the restaurant’s entrance and two lions, in pink marble, guarding the entrance. The furniture is all custom-made from Italian leather and Canadian cowhide.

The menu features a selection of unusual cuts of steak. For instance, there’s a wagyu filet tasting for $250 that combines an International sampling of the prime cut from the U.S., Australia and Japan for a total of 12 oz. For those who want to cater to their primal side, there is a 44-oz. Tomahawk steak for two from New Brunswick, which is dry-aged for a minimum of 40 days for $180 a pop. Cocktail lovers are in the hands of Oliver Stern (Bar Begonia, Toronto Temperance Society). He has created an extensive list of both house cocktails and a luxury “Noble Vein” list using super-premium spirits such as Remy Martin Louis XIII Grande Champagne Cognac, which serves as the base spirit for the $500 King Louis cocktail with Balvenie 30yr and aromatic bitters.  “Like the steakhouse, we’re trying to focus on classics. Classics are classics for a reason and everything on our cocktail list are riffs on classics; modern twists,” he says. For those of us blue collar folks, perhaps we’ll just stick to drinks like the Down By the Bay ($16) made with Ketel One vodka, Aperol, watermelon shrub, soda and lemon juice.

And on a sweeter note, the dessert menu includes an Italian-ized Baked Alaska, a log-shaped “terrine” with four flavours of gelato – chocolate, lemon, strawberry and vanilla which is flambéed tableside and topped with a prosecco foam. There’s also a cheesecake with vegetable ash and strawberry coulis.