Q&A: Joan Baez on religion, the Occupy movement and her rare T.O. concert appearance - Streets Of Toronto
Skip to content 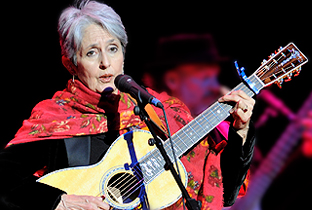 She kick-started the career of a then little-known singer named Bob Dylan, marched with Martin Luther King and sang to Nelson Mandela. Along the way, she’s released 50 albums and won countless awards and tributes. Joan Baez is a living legend, and for the past 53 years has attempted to make the world a better place the only way she’s ever known: by singing. She plays at Roy Thomson Hall tonight.

You’ve done so much over the years. What would somebody be surprised to learn about Joan Baez?
I’ve got the voice of an angel and a mouth like a dock worker.

You’ve played in Toronto before, at Massey Hall. Any fond memories?
Well, I remember they used to have everyone stand for “God Save the Queen,” and I had to stay backstage because I wouldn’t stand up for anybody.

What is success to you?
Probably, these days, managing to cook some applesauce, because I’ve forgotten how to cook.

Do you feel like people just want to hear the old classics and relive their own glory years?
People never want to hear anything new. The tricky part is to find a way to introduce a song. I have to know ahead of time if it is new to their ears, make it listener-friendly and not too complicated, something that I know will take.

Will you be playing mostly from the last couple of albums?
Well, the key is to keep it fresh. Even the old songs have to be fresh. I bring one musician with me, a good creative mind. So we do a couple they’ve never heard before and some they’ll recognize from things along the way and some old chestnuts, of course, because I owe it to them, you know.

True. Despite your reputation, I guess the last thing they’d want to hear is ‘This is how we did it in the ’60s.’”
Yes, the last thing, and I don’t blame them.

You started out singing ballads. What was your baptism into protest songs?
One of the first things I did when I started moving out of my ballad period was do a benefit for SANE, an anti-nuclear benefit, with Pete Seeger. And we all had eggs thrown at us. That was it.

You were raised in the Quaker tradition. Does that still hold true to you?
I think probably what held over was two things. One, the Quakers are really serious about not killing anybody. It is the only religion, including Buddhist, that doesn’t follow the call to arms and accept the consequences for refusing to kill. The other thing is the silence.