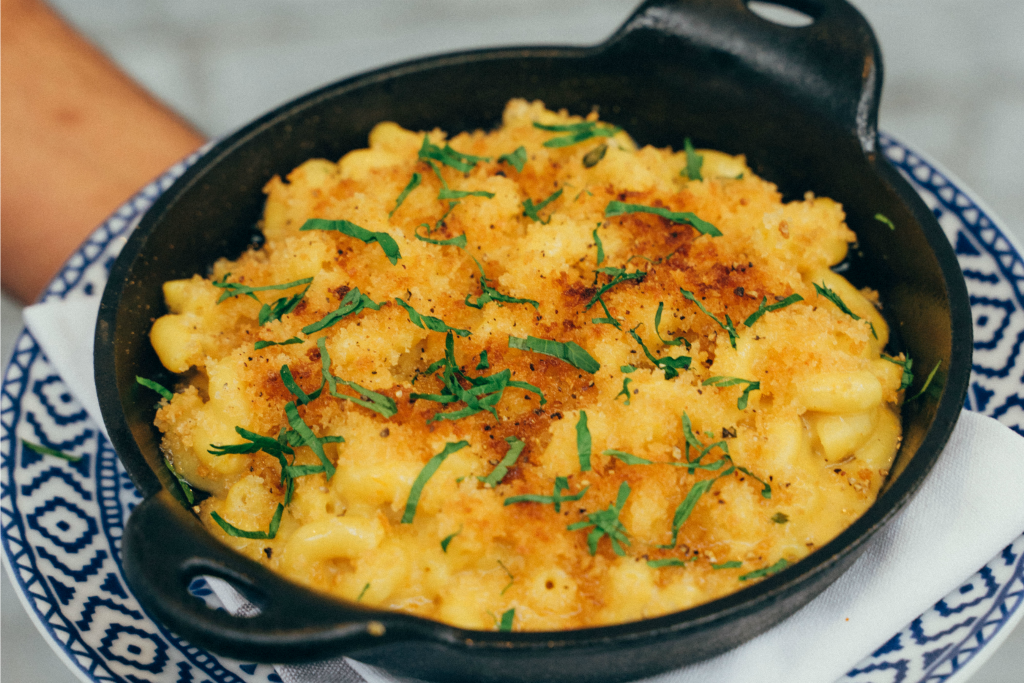 This week, as many of us find ourselves cooking at home instead of dining out, we’re sharing recipes from some of Toronto’s top chefs and restaurants.

“Mac and cheese is the epitome of comfort food,” says Planta‘s chef David Lee. “There is nothing like a plant-based spin on a beloved classic.”

1. Preheat the oven at 400 F
2. Start boiling a large pot of salted water for the pasta. When water has boiled add pasta, cook pasta
3. Pour plant-based milk into medium sized saucepan, bring to a boil
4. In a small bowl combine olive oil and flour, whisk together
5. Using a spice grinder or food processor, combine almond flour and nutritional yeast to make a plant-based parmesan cheese
6. When the plant-based milk has come to a boil, turn down the heat and add the olive oil and flour mixture. Mix together on a gentle heat, making sure the flour doesn’t stick to the bottom of the pot. Add a couple pinches of salt to taste
7. When the pasta has cooked, drain the water
8. Add the pasta to the sauce and stir on medium-high heat
9. Add the plant-based cheese to the pasta and sauce. Mixing in to melt the cheese. Cook the pasta on a gentle heat for 2-3 min
10. Transfer about two-thirds of the mac and cheese into an oven-safe casserole dish. Add a layer of plant-based cheese, plant-based parmesan and fresh pepper. Add the remaining mac and cheese for a second layer. Add another layer of cheese, parmesan and pepper
11. Bake in the oven for 15-20min at 400 F or until golden brow
12. Remove the mac and cheese from the oven and let sit for a few minutes before serving

Tuck in and chow down on some tasty mac and cheese! We won’t judge if you eat it straight from the casserole dish. Or, find out how to make Pizzeria Libertto’s famous meatballs here.