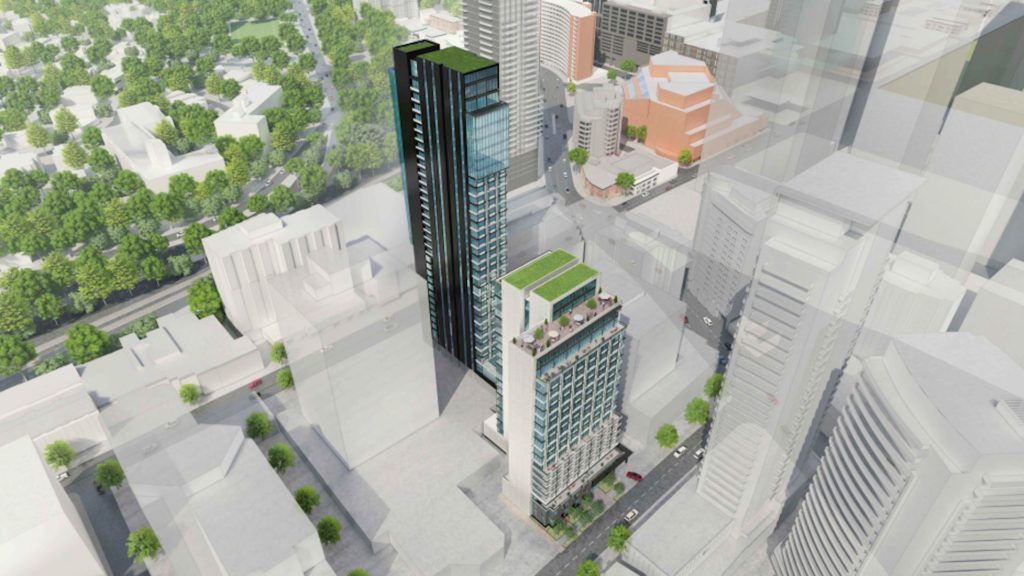 A two-tower development is being proposed for the Yorkville area, but there is concern the buildings would be far too close to homes currently adjacent to the site near Yonge and Davenport.

The site at 906 Yonge St., slightly north of Davenport, is an unusual L-shape that fronts onto Yonge but extends back to McMurrich, where there is currently a parking lot and outdoor playground.

Currently facing Yonge Street is a three-storey Tudor Revival heritage building that used to be home to a furniture store. The proposal would preserve the front facade of the building and use it as the main entrance for residents.

However, local councillor Mike Layton said the proposal does not leave enough space between the current buildings adjacent to the site.

“There are some serious proximity issues, particularly at the rear of the site,” he said. “We, generally speaking, don’t approve buildings with windows facing that close to one another.”

Layton said that the proposal leaves windows just metres from each other, so residents would essentially be looking into each others’ homes.

“All of their windows, balconies, and everything else would be impacted by this new building substantially,” he said.

Bedford also pointed out that an application for the Yorkville site was already submitted to the city years ago and was rejected by city planners, city council, and the Ontario Municipal Board (OMB) in 2014.

He said the OMB was “crystal clear” in its decision, saying that the area was not right for high rises but preferred mid-rises.

“I’m really amazed that this new application has come back and ignored all that,” he said. “[McMurrich] is a mid-rise street, not a high-rise street.”