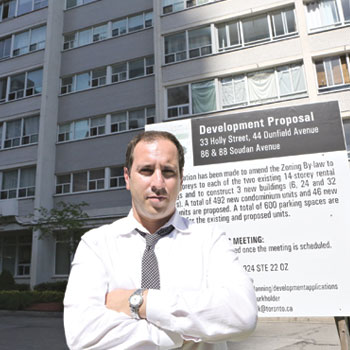 A controversial series of condominium proposals for Holly Street and Soudan Avenue will have a difficult time gaining Toronto City Council approval unless major changes are made.

In what Coun. Josh Matlow calls, “simply the worst infill development I have seen in four years,” Compten Management Inc. is proposing to place five-storey condo additions on top of two 14-storey apartment buildings at 33 Holly St. and 44 Dunfield Ave.

The condo proposal includes amenities, such as a pool, that the apartment residents would not have access to, and it’s this mix-and-match concept, along with the intensification of the neighbourhood, that has Matlow and local residents’ associations opposing the plans.

“To put these condo units on top of the apartments is an absurd concept, and not allowing the apartment tenants access [to amenities] is just ethically wrong in my mind,” he said. “Tenants are as important as any homeowner, and I feel this proposal is highly disrespectful to the renters who would have to put up with this construction for two years and reap no benefits when it’s done.”

Meanwhile, at 86 and 88 Soudan Ave., just south of the Holly Street project and the Yonge-Eglinton intersection, Compten is proposing to build both a 24- and 32-storey condo tower, and Matlow said he will oppose the plan due to the proposed scale and height of the two towers. With single-family dwellings just across the street from the proposed towers, Matlow said there would be serious shadow-casting issues and it is too abrupt a height transition from the dwellings to the towers.

Matlow said City of Toronto, City Planning staff is preparing reports on the proposal, but he added that staff is waiting for an alternative proposal that may be more suitable.

“They [the developer] have to bring us another plan, and we’ll take an honest look at any alterations they propose,” he added.
Representatives from the developer did not return requests for comment by press time.