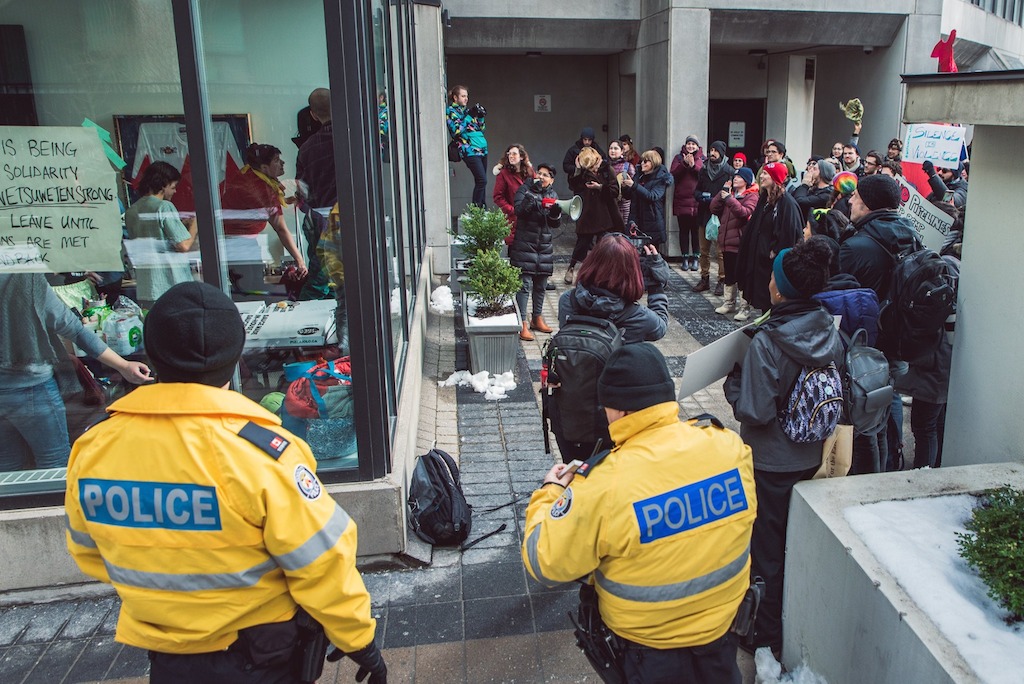 Demonstrations have sprung up across the country, including right in Midtown Toronto, in solidarity with the Wet’suwet’en fight against the Coastal GasLink pipeline, including a camp set up to block construction.

The demonstrations began after the RCMP enforced a court order to shut down the Wet’suwet’en camp by evicting and detaining the protectors on site. That move sparked solidarity protests across the country.

Near Belleville, the Mohawks of Tyendinaga shut down rail traffic on the CN Rail tracks resulting in VIA cancelling more than 150 trips between Toronto and Montreal on one of the busiest rail corridors in the country.

The Mohawks have shut down the line since Feb. 6. And, in British Columbia, a similar protest has cancelled more trips on CN Rail lines near New Hazelton, B.C. in the northern part of the province. And, protests also shut down an intersection in downtown Vancouver.

Hours in, and this crowd at Cambie and Broadway has only gotten bigger.#Vancouver out in a big way for Wet’suwet’en ✊🏼#WesuwetenStrong #WetsuwetenSolidarity #yvr #bcpoli pic.twitter.com/PpQx3uikcY

Similar protests hit midtown Toronto this week when the intersection of Yonge and Eglinton was shut down for hours on Feb. 11 and MP Carolyn Bennett’s office was occupied by members of Toronto Climate Justice and Indigenous rights groups in solidarity with the Wet’suwet’en camp.

A written statement read in part: “the RCMP have arrested 25 land defenders including Indigenous leaders, legal observers, and journalists. The RCMP has also barred journalists from accessing the site, and have enforced an unlawful exclusion zone well outside of the B.C. court’s injunction zone. This prevents the free movement of Wet’suwet’en people and their allies on their own unsurrendered land. The actions of the RCMP, the BC, and federal governments are in violation of Wet’suwet’en law, Canadian law, and international law.”

Looks like the protest made it all the way up to my hood, Yonge and Eglinton is on lockdown #pipeline #protest pic.twitter.com/Z0d9MOALYS

Bennett, the Minister of Crown-Indigenous Relations, was identified as a key figure for the protests as she “clearly has authority and responsibility over this matter. Ms. Bennett has had the portfolio overseeing Crown-Indigenous affairs for 6 years. She held this role last winter, when the RCMP violently raided the land defenders’ camp at Unist’ot’en and peaceful Indigenous land defenders were arrested. Now we’re tragically at 25 arrested and counting. Where is she?” called climate justice organizer Leila Atri to fellow activists occupying the office. In December 2019, the Guardian exposed internal documents outlining that the RCMP were prepared to use lethal force, and now Minister Bennett and her Liberal caucus are again allowing the same colonial violence to take place on unsurrendered land.”

BREAKING: Indigenous and settler youth have occupied the office of Liberal MP @Carolyn_Bennett, the federal Minister of Crown-Indigenous Relations, in solidarity with the Wet’suwet’en as they resist a violent, militarized RCMP raid on their unceded territories. #WetsuwetenStrong pic.twitter.com/7SdiwhMIwl

Reports this morning indicate the RCMP are getting ready to move in and end the demonstration on the CN Rail tracks near Belleville just as CN announced that it will shut down significant parts of its Canadian network if the protests are allowed to continue.

Calling the situation “dire,” Ontario Provincial Police (OPP) officers on Tuesday warned demonstrators set up along CN Rail tracks near Belleville, Ont., to clear the area or face a raid and arrests. https://t.co/s519Tv7LeL

“It’s not just passenger trains that are impacted by these blockades, it’s all Canadian supply-chains,” said JJ Ruest, president and chief executive officer at CN. “We are currently parking trains across our network, but due to limited available space for such, CN will have no choice but to temporarily discontinue service in key corridors unless the blockades come to an end.