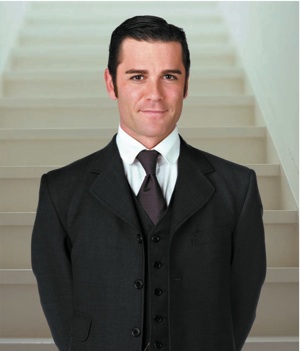 MR. HUGLY, YANNICK BISSON’S junior high school shop teacher, has a lot to answer for. A quarter century after the elder criticized the younger’s substandard homemade candlestick holder for its fire-hazardous properties, this former Bayview resident is lighting up screens big and small in a life that’s benefited tremendously from appreciating the importance of first laying out a plan.

"If you’d taken this home and put a candle in it, your house would be on fire," Mr. Hugly told his young scholar of a project design that failed completely to take into account the device’s eventual purpose. "I learned from that," Bisson says, "in a big- picture kind of way."

Today, the big picture for Yannick Bisson, who meets me this day in a bookstore coffee shop, is huge. He has a regular gig as the title character on Murdoch Mysteries, a detective drama that has just been green- lighted for its third season on Citytv. He is the national spokesperson for the CIBC, an assignment that sees him spending several days a month shooting commercials, recording voice-overs and posing for advertising materials. And he has a lead role on a soon-to-shoot Kevin Spacey biopic about disgraced former American lobbyist Jack Abramoff.

There are other projects, too, including some of his making as the actor ventures increasingly into the world of film and television development. "That’s been a lot of fun over the past few years," says Bisson, who undertakes these projects in the close company of his wife of 19 years, Chantal Craig. "We’ve been writing, developing, producing. That’s where I really see us getting a lot of artistic satisfaction."

But in the beginning, there was only a dream. And an uncanny sense of prescience.

Today, 40 is less than a week away — and for this positive- thinking actor, the news couldn’t be better. "I always pictured myself being successful as an actor and playing the parts — doctors, lawyers, detectives — that an actor the age of 40 would play."

It’s an irony, really, this fixation with age, considering how fresh-faced Bisson looks with his perfect smile and tanned, handsome features. "I guess it’s because I had my kids so young," he says and shrugs. That he did suits his 20-year-old daughter, Brianna, just fine. "He’s still young and so much fun," she says of her dad. Last year, she and her father went halves on an Xbox, and many’s the night since the pair has worn out the hours playing Halo 3 in the basement.

"Most people I know wouldn’t do that with their dads," she says. "He’s just cool. I have so many friends whose parents are older, and they can’t relate to each other."

In addition to Brianna, who is in her second year studying English and history at York University, Bisson has two other daughters, Dominique, 18, and Mikaela, 12. The lot of them settled in Bayview in 1998 when Bisson, a native Montrealer who spent his childhood moving for his father’s bridge-making job, decided it was important that his kids have a home base in a city they share with family members.

The choice has been tricky to see through at times. The move from Los Angeles back again to Toronto (he settled for a second time in the Bayview area and spent two years there before taking off for East York) coincided with Bisson’s signing of a new show, Nothing Too Good for a Cowboy, which shot in Vancouver. For almost two years, Bisson commuted back and forth across the country. "That was hard," he says.

Easier was his summoning of childhood memories from his first experiences in Bayview. Fresh from the wilds of Tampa Bay, Florida, the teenage Bisson landed in Willowdale in the middle of winter. He remembers marvelling at the melting pot that is Toronto, and the way kids from different backgrounds blended so well. But he remembers the cold most of all.

He played football in freezing temperatures on Baycrest Field, with the North York Minor Football Association ("It was really painful"), and rode his bicycle around the Seneca College campus and from his house to the Peanut Plaza. As a kid, Bisson remembers, the geography of his surroundings was incredibly spaced out. "You’d travel along Steeles and between intersections it seemed like miles and miles. You’d be riding your bike, and it would seem to take days to get to your friend’s house."

He remembers, too, another teacher who was instrumental in helping to mould the person he would become. Mrs. Daniels was the theatre arts teacher from Highland Junior High and a contemporary of Mr. Hugly. It was in her class that the young Bisson enjoyed his first exposure to the world of dramatic arts. "She taught us so much," he says. "She was a real no- nonsense lady and she created a great atmosphere for young, emerging artists."

It was during this time that Bisson began his professional acting career. His first big break was in CBC Television’s critically acclaimed 1984 movie of the week Hockey Night, with Megan Follows and Rick Moranis.

Bisson prides himself on working hard as an actor, and for never taking the easy routes. He feels it’s important to stay on top of what everyone else is doing on set and so doesn’t stop when he’s nailed the expectations a particular project has of him.

"A lot of actors show up and know what they need to do really well but have no idea what’s going on on set or around them," he says. "That slows things up. There’s a lot more to being an actor than withdrawing into your shell and becoming the right character for a week. You’ve got to be awake and participating in the process technically."

Springing up from Bayview Village’s bookstore cafe, which has played host to our conversation, to head for the parking lot and home, Bisson stops in his tracks to review a shiny hardcover. Decks, it’s called. "I’m really into this stuff these days," he says, his fingers stroking the book’s smooth cover. "I’m building another one."

That he’s doing so under the strict guidance of a plan is reassuring. Mr. Hugly would be proud.