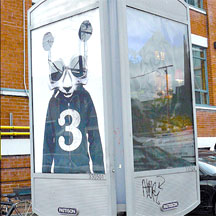 TARGETING PILLARS owned by billboard giant Pattison Outdoor that were allegedly in violation of city bylaws, more than a dozen volunteers joined together to remove 41 ads and replace them with 85 pieces of art donated by both local and international artists.

“Toronto has a vibrant arts and activist community with a deepfelt respect for current public space issues,” says Jordan Seiler, one of the event’s organizers and founder of the Public Ad Campaign, a group dedicated to reclaiming public space from illegal advertisers.

“Toronto participants wanted to draw attention to the billboard bylaw and the lack of enforcement of illegal signage in a city they call home.”

Despite a new sign bylaw and tax that came into effect last April, public space advocates point out that many companies continue to operate outside of the current legal guidelines.

Demonstrations such as this one are meant to draw attention to what some see as the city’s lax enforcement.

Rami Tabello, founder of IllegalSigns.ca, has been battling illegal billboards throughout the city for years. Though he was not involved with TOSAT, he says that such actions are an effective way to reach out and make the wider community aware of the problem.

“It brings attention to it, and it makes an impact,” he says. Tabello instead chooses to work within the legal system to file complaints and get illegal billboards removed, but he acknowledges that results can both come quickly or drag on for several years through the court system. Seiler agrees that real change will only occur through the proper legal channels.

“In order to express our heartfelt concern for this issue beyond community meetings and pleas to our local council members, direct action projects like this allow our grievances to be heard beyond the traditional venues while employing means that fully express the severity of our concerns,” he says.

“In order to truly eliminate commercial media from our communities … we must work within the legal structures already in place.”