Work Out with Monika: Monika learns to play bike polo, a sport where women rule - Streets Of Toronto
Skip to content 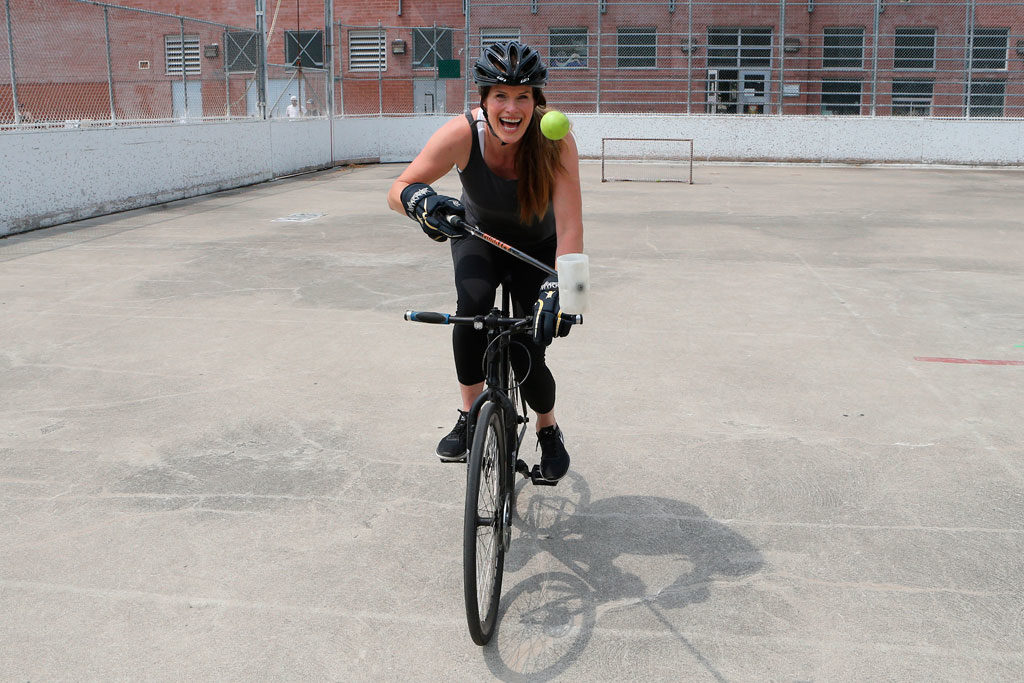 First off, let’s talk about what bike polo is. Polo on bicycles has been around for more than 100 years. Hard court bike polo (on cement) gained popularity around 2007 as a pastime for bicycle messengers in Seattle between deliveries. Alex Lyon from Toronto Bike Polo taught me in the ins and outs of the hard court version on the hockey rink at Dufferin Grove Park. The sport is exactly as it sounds, polo without the horses (or pretense) of the traditional game.

The rules, insofar as they exist, are simple. Don’t touch the ground with your feet. Failure to comply with this guideline results in a trip to centre line, which must be tapped with your mallet before you can get back in the game. Jostling is OK, but outright shoving is not. Teams field three players a side — usually an attacking defender and two forwards. Games last 15 minutes.

First impressions
It’s a steep learning curve at first.  Balancing on the bike and holding the mallet while trying to move the ball forward all challenge your senses at once.

The facility
Although various clubs play at locations throughout the GTA, I was at Dufferin Grove Park, located at Dufferin and Bloor. Beginners can join pick-up games here on Wednesday nights at 7 p.m. where Toronto Bike Polo supplies the mallets, balls and coaching for new players.

The instructor
Alex Lyon’s passion for the sport is evident during the lesson.

“It has the inclusiveness of a DIY bike community but also has the team bonding of more conventional sport. To me that’s the best of both worlds,” he says.

Equipment
You can start out using your regular street bike as long as your bike has brakes and is safe (nothing sharp). You can buy polo-specific bikes, but normally people only do that after they have played for a season. Those bikes only have one gear for quick pickup from a standstill along with a disc brake on the front wheel for stopping quickly. The mallets are provided but they recommend bringing a helmet and knee and elbow pads.

Level of difficulty
This looks much easier than it actually is! Think cycling home with all of your groceries on a bike while dodging rush hour traffic. I felt as if I were five years old, and my training wheels had just come off my pink BMX.

The next day
Bike polo is all about balance. You end up using your non-dominant shoulder since your dominant hand holds the mallet. This is a cycling sport, much like mountain biking; therefore, your larger muscle groups (quads) and stabilizers (arms and shoulders) all get a good workout.

Favourite part
Bike polo is very inclusive. Some of the best players in Canada are women. Every year there are women’s tournaments, including the women’s world championship event, titled the Ladies Army.