Will condo bust spread? - Streets Of Toronto
Skip to content 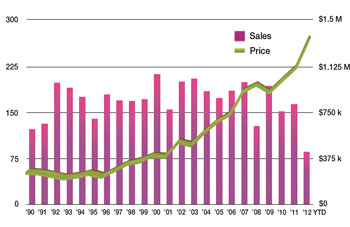 The gentle flap of For Sale signs in the torrid summer breeze has suddenly become a lot more commonplace in our ’hoods. No longer are they all plastered with a Sold Over Asking sticker in a matter of 48 or 72 hours. Some people attribute this slowdown to vacation-time doldrums. But has Ottawa’s new war-on-the-house campaign already had an impact?

Hmm. It wouldn’t be a surprise. After all, the 30-year mortgage has been murdered, with the drop to just 25 years equating to a mortgage increase of almost one per cent in terms of monthly payments. The cash-back home loan will also soon be history, so first-time buyers must actually use their own money rather than the bank’s. Borrowing qualifications are being hiked and regulators are insisting appraisals be more thorough. And no longer will CHMC even insure a mortgage on a house changing hands for more than a million.

Some people think this will nuke only Toronto’s out-of-control condo market. But whereas the changes ensure many projects are never built, the fallout won’t stop there. My pal Gwen recently bought a Leaside faux baronial McMansion for $1.5 million, and when her lawyer searched the title, it was discovered the previous owner had a $1.2 million mortgage on a 2009 purchase of $1.265 million. Yep, five per cent down. Full CHMC insurance. Now banned.

This raises the question of how much external trivialities — the government, the economy, interest rates — affect micro-markets such as Leaside, Lawrence Park, Thornhill, Moore Park, Hogg’s Hollow or Richmond Hill. Does it actually matter when there’s a recession or a stock market collapse?

Gwen asked me about that, so I sourced some numbers for her in-demand area. Leaside has a total of about 5,000 homes, for example, and new structures only arise on the graves of former bungalows.

The 22-year scorecard is in the  table above. What does this tell us? That the area recovered quickly from the T.O. real estate meltdown of the early ’90s and even faster after the 2008–2009 financial crisis. We can also see the number of houses listed annually is consistently stable: an average of 168 a year or just over three per cent of the housing stock, which is the main reason prices usually swell.

But this chart’s also troubling. The average Leaside property now costs 184 per cent of what it did in 2000. It has doubled in just five years — light-years ahead of the 70 per cent increase in GTA real estate since 2002. Demand has consistently outstripped supply, pushing valuations to the extreme and ensuring new buyers are in the elusive one per cent of income earners. But has it been too much, too fast? Will the fed’s attack on the GTA’s downtown condo bubble throw spray all the way into midtown?