Why is the city of Toronto doing nothing about bike share e-bikes being used for food delivery? - Streets Of Toronto
Skip to content 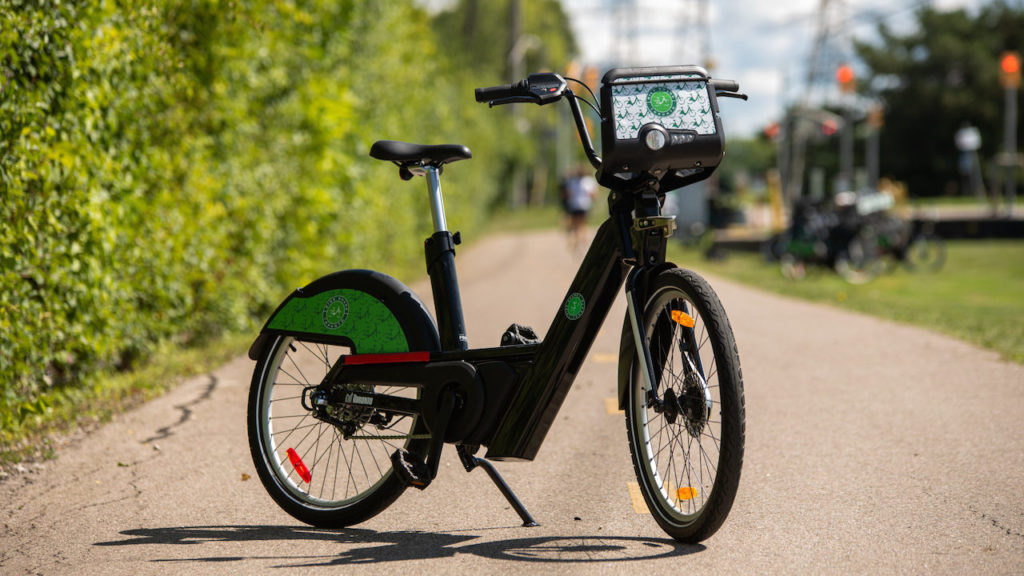 While waiting for a food delivery to the office, a cyclist with Uber Eats pulled up, passed over lunch and sped away. He was pedalling a Toronto Bike Share e-bike. It registered as odd given that the city funds the Toronto Bike Share (yes, us). And, apparently, this has been going on for years.

After a quick search, it was easy to find a how-to video for would-be food delivery personnel looking to use a Toronto Bike Share e-bike. And why not? Passes cost around $115 per year for the 45-minute plan and there is literally no maintenance. If a bike doesn’t work, take another one. If there isn’t one available, time to find a new driver.

The city is crazy for food delivery apps. Drivers and cyclists can be seen careening around the city by the hundreds.

And, rumour has it, the e-bikes are often seen around town locked with personal locks, not just the official docking stations, thus allowing the driver to maintain some form of temporary ownership. Others commenting see the situation as half-full. If the user is going over time and paying extra fees for that extra time, that revenue can help Toronto Bike Share grow and ideally purchase more e-bikes for everyone to use. In addition, food delivery drivers are generally trying to scrape together a living and could more than likely be intent on buying their own e-bike if and when possible.

Bike Share Toronto doesn’t charge extra to use e-bikes. It’s all included in the price of a pass. And the overages are fairly modest.

When asked about the situation, Justin Hanna, director of Bike Share Toronto, responded with something akin to a digital shoulder shrug.

“Bike Share Toronto is intended to be used as a convenient, affordable and sustainable mode of public transportation for short-term station-station bike rides to get people from Point A to Point B, not a service to be used by courier services. The member agreement specifies that no user can reserve, or lock up a bike for private business use at any time,” Hanna said, via email. “We are aware that some delivery drivers use e-bikes in ways that contravene their intended use and are looking at options to mitigate or eliminate this practice, including the examination of other North American bike share networks. We are committed to ensuring that the system be used for its intended purpose and is available to everyone for station-to-station rides.”

Keep in mind, Bike Share Toronto loses money and each ride is subsidized about 57 cents. Of course, it also offsets millions of pounds of carbon and contributes to the city’s climate goals under its TransformTO plan.

So, they are looking into it. I guess that’s good. But then I noticed over two years ago, other stories of reporting this very practice to the city, and receiving answers very similar to the one above.

In Vancouver, for instance, this issue has not been a problem.

“We haven’t experienced any issues with food delivery service workers using our e-bikes as part of Vancouver’s public bike share system,” says Mia Kohout, general manager and director of Vancouver Bike Share. “This might be attributed to the extra per-minute fees that users pay to use shared e-bikes vs classic pedal bikes. We launched e-bikes in August of 2022 so our experience to date is limited to the past six months.”

Montreal also charges a per-minute rate in addition to the base rate for its e-bike fleet.

Bike Share Toronto is managed by the Toronto Parking Authority and bills itself as the fourth largest bike share system in North America. It hit 4.6 million rides by the end of 2022, and is currently at the early stages of a four-year growth plan that stretches to 2025. It added 225 more e-bikes to the system this past summer, and hopes to reach 2,000 e-bikes by 2025, which would represent 20 per cent of the fleet. Once the growth plan is fully implemented, a Bike Share Toronto report states that “the system will have at least 1,000 stations, and 10,000 bikes – 2,000 of which will be pedal assist e-bikes.”

We know a thriving bike share system is great for the city on many levels. Bike Share Toronto has serious growth plans, including stretching out beyond the downtown in a significant way. But if it doesn’t deal with the drag on the e-bike roll-out in some way, whether by charging per-minute fees for e-bikes, or finding a different way to deal with the contravention in use that seems to have been going on for years, maintenance and e-bike replacement costs could be an anchor weighing down potential gains.