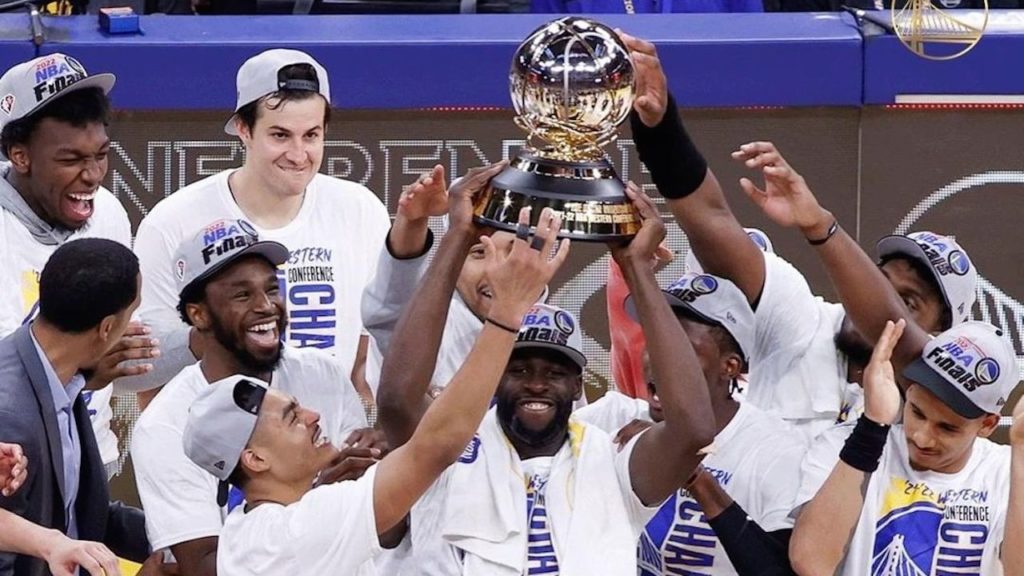 Congratulations to Toronto basketball star Andrew Wiggins who won his first NBA championship last night with the Golden State Warriors. The Warriors beat the Boston Celtics in Game 6 to take the series 4-2. Wiggins had an incredible run in the playoffs performing at an all-star level, especially during the NBA Finals when he locked down Boston Celtics star Jayson Tatum. Wiggins finished the game with 18 points to go along with an impressive six rebounds, four steals and three blocks.

Almost a decade ago, we penned a story about a rising force in Canadian basketball named Andrew Wiggins. Born in Toronto, raised in Thornhill, with a pro basketball player and an Olympian as parents, Wiggins played a year of college at Kansas University before being drafted first overall by the Minnesota Timberwolves. He showed a tone of skill and promise, but never really found the right fit for his skill set until he landed in San Francisco, California to suit up alongside one of the greatest collection of NBA players in league history.


This wasn’t the Golden State Warriors of old, this was an ageing team with one superstar coming back from a devastating knee injury in Klay Thompson. Few predicted the Warriors team would put it all together in time to take a run at their four NBA title, but did they ever. And one of the main reasons, besides the sublime play of NBA Playoffs MVP Steph Curry, was Andrew Wiggins, who more than held his own alongside the future Hall of Famers Curry, Thompson, and Draymond Green.

Congrats Wiggs. Check out the archived story below.

Why Andrew Wiggins will conquer the world

Thornhill’s Andrew Wiggins is an incredibly talented, athletic phenom. He is the best basketball player on the planet at the age of 18. He’s the projected number one pick of the 2014 NBA draft, the saviour of the Canadian hoops and he’s just getting started.

The six-foot, seven-inch Wiggins was born and raised in a very athletic Thornhill family: his mom, Marita Payne-Wiggins, won two silver medals in track for Canada at the 1984 Summer Olympics in Los Angeles; his dad, Mitchell, played pro basketball in the NBA. He has five siblings. One of his older brothers is playing basketball south of the border at Wichita State University while the other is at Southeastern. His three sisters have all played basketball.

But what separates NBA superstar and global sporting icon Lebron James from Darius Miles, the athletically gifted, next-big-thing in the NBA that never was (don’t remember him? exactly) is character. And Wiggins has it.

Gus Gymnopoulos knows the family well. The Vaughan Secondary School phys. ed. teacher and basketball coach has schooled most of the Wiggins clan on the basics of the hard court for the better part of a decade.

“Andrew has been around basketball his whole life,” says Gymnopoulos, whose team won an Ontario Federation of School Athletic Associations Basketball Championship in 2011 with Wiggins at the helm. “You can’t make that stuff up. It was almost a perfect environment.”

But, it is the stuff in between Wiggins’ ears that continues to impress Gymnopoulos, who still keeps in touch with his former student and welcomes him back into the school gym whenever he’s in town, as he does with all former players.

“I think he has the perfect character and demeanour to handle the toughest situations,” he says. “He doesn’t care what other people say. He has the ability to deflect. No one trained him; it’s just the way the kid is. He has the mental makeup to be able to handle any situation.”

Could it be that it has something to do with the family-first and friendly Thornhill neighbourhood?

The buzz on Wiggins started to grow to a fever pitch when he transferred to Huntington Prep in the United States for his last two years of high school hoops in an attempt to showcase his very unique skill set.

During his final year, Wiggins was carted around the country kicking ass and taking names on the biggest basketball stages for young players in the United States: the McDonald’s All-American Games, the Nike Hoop Summit and the CIA Bounce. He was also named Mr. Basketball USA, Gatorade National Boys Basketball Player of the Year and Naismith Prep Player of the Year.

“I think he has the perfect character to handle the toughest situations.”

It was at a CIA Bounce game where Wiggins caught the eye of ESPN’s college basketball guru Paul Biancardi.

“The first chance I saw him play, it was his obvious athletic ability that stood out,” says Biancardi, who has described Wiggins as already being NBA ready.

“He made basketball plays on O and D utilizing that athleticism and that has continued over his career.… Wiggins can be special.”

But the trick will be to ratchet up his game even more when he begins to face a much stronger and more experienced competition in the NCAA. “He needs to stay engaged in the game,” says Biancardi. “Sometimes he can disappear because everything came so easy to him in high school. When he’s not scoring, he’s got to rebound, pass and defend.”

Following his high school career and another successful year with Huntington Prep, Wiggins was faced with the relentless gaze of a basketball-obsessed media demanding to know what NCAA school the budding superstar would attend — at least for one year until he was eligible for the NBA draft. All the big names came calling, autograph seekers staked out his apartment. It was a lot for a shy kid from Thornhill to handle.

“Just think, from his last month at school, he’s been on the road constantly,” says Rowan Barrett, a former pro baller and current assistant GM/executive VP of the senior men’s program at Canada Basketball, who considers Wiggins a major part of the national team’s future success. “When most kids are getting ready for high school prom, he’s travelling to Chicago, New York; travelling all over and doing two hours of media every day; all the reaching out from college coaches that he endures: the kid had a whole lot on his plate.” But, a decision had to be made.

On May 14th, Kurtis Townsend and the other members of the Kansas University basketball coaching staff were huddled around the TV in their gym offices waiting for the news that would make or break their upcoming season. Namely, what university Wiggins was going to attend this fall.

“He was playing his cards really close to his vest and we had no idea,” says Townsend, with a laugh that could only come from someone who landed the big fish at the end of the story. “I thought we had a real good visit, but he took it right to the end.”

It was widely rumoured that Wiggins would end up at his parents’ alma mater, Florida State. Others suggested nobody could say no to the allure of Kentucky.

“We were told he was announcing at 12:15, and it was 11:15 our time. We were just sitting around, hadn’t heard anything. The phone rang and it was like ‘congratulations you did it.’ We were slapping high-fives in there. He’s a game changer, for sure. We had a really good recruitment class, but he was the icing on the cake so to speak. We are definitely in the talks with a chance to win it all.”

“I’m looking forward to getting there and just doing my thing,” Wiggins said to the Associated Press after making the announcement. “I just followed my heart,” he added.

One of the reasons for his choosing Kansas, according to Townsend, is the proximity of the school to Wichita State, where his brother plays. Another: Kansas University is home to the best conditioning program in the country. And Wiggins needs to bulk up to handle the big boys down low this season — corn-fed mules who will no doubt use their size advantage to try to slow down the athletic youngster.

After his first few practices with his new Kansas teammates, long-time head coach Bill Self remarked that Wiggins could “do some things that I’ve never had a player be able to do physically.”

Not bad for a kid from Thornhill.