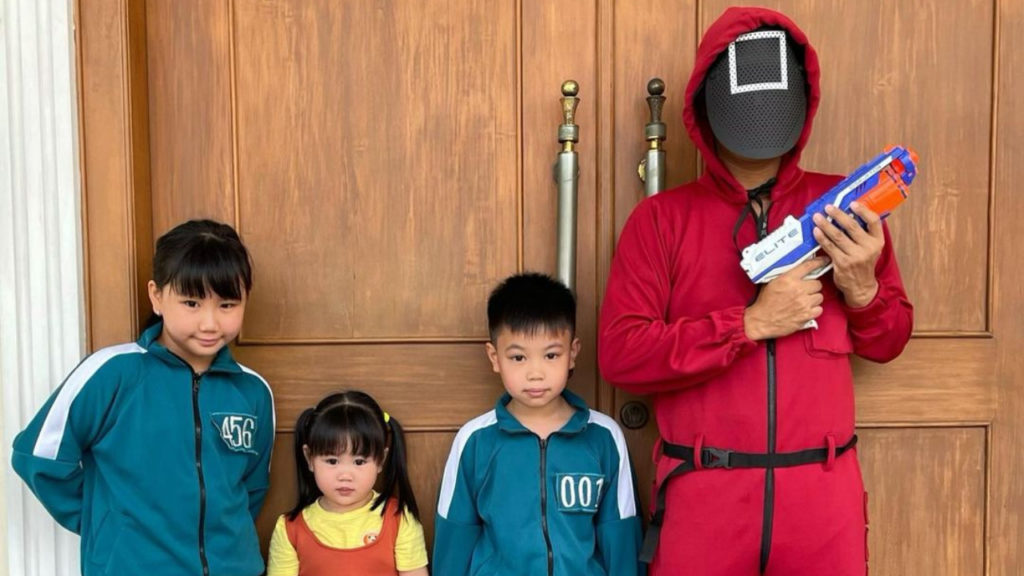 It seems every Halloween there is one costume that’s more popular than the rest, and it’s almost always based on the latest movie or TV show release. In 2016, girls had pink and blue hair to match Harley Quinn, while in 2019 Pennywise was seen on every street corner. This year, everyone is talking about Squid Game, and with its immediate success in becoming the most popular show ever on Netflix, we’re sure to see quite a few Squid Game costumers at this year’s Halloween parties.

Here’s how you, too, can join in the fun and make a great DIY Squid Game costume in Toronto this year.

Squid Game’s players might be the easiest costume to DIY and make for convenient group costumes. These distinct costumes are created using just a green tracksuit labelled with the player number of your choice. Amazon sells these suits already donning the player numbers of all your favourite characters, including 456 for protagonist Seoung Gi-hun and 001 for the likeable elder Oh Il-Nam. Be sure to order soon to ensure your shipment arrives before Halloween!

For a DIY version of the costume, green tracksuits are not hard to come by. Adidas offers green tracksuits that already have the white stripes down the side, meaning you only have to sew on the number of your favourite character and you are ready for Halloween!

If you’re looking for a costume that’s a bit more mysterious, the guard costumes are easy and more distinctly recognizable. Woodbridge Costumes rents out red jumpsuits that double as both Money Heist and Squid Game costumes. These Money Heist jumpsuits can also be found at Party City locations across Toronto.

To complete the look, harness a black belt across your waist and find a plain black mask from any Spirit Halloween or Party City and use tape to create the triangle, square or circle shape on the front to recreate the mysterious look. A great option is the Hidden Face Mask in Candy’s Costume Shop on Mount Pleasant. Harder than finding the costume will be mastering the role of the guard and only speaking when spoken to.

One of the major twists of the show’s season finale was the reveal of the Front Man, the competition’s showrunner. His look is a bit more subtle than the rest of the staff members running the competition. Like most of the most terrifying horror movie characters including the Grim Reaper and Scream, the Front Man dons a mask and is dressed in all black.

For this one, stop by It’s My Party on Danforth Avenue and pick up a Michael Myers costume. Pair the cloak with a pair of leather gloves and the Iridescent Metallic Hooded Mask from Spirit Halloween and you are ready to be the most mysterious and powerful character of the whole show.

Perhaps the most powerful of them all, the VIPS are really the ones ruling the show. If you want to stand out on top at the Halloween party this year, all you need is a nice suit and a painted gold animal mask. Candy’s Costume Shop sells a Glitter Cat Mask that will do the trick once you paint it a shiny gold.

If you’re looking for a quick, last minute Squid Game costume to throw together, you might just have everything in your closet for the Red Light, Green Light doll. All it takes is an orange dress, which you can find on Amazon or at a thrift store, and a yellow polo shirt from Walmart. Pair it with some knee high white socks and black shoes, and you are good to go! Just don’t forget the signature red lips and pigtails. The bangs make for an iconic part of the look as well, so why not try the R and B Page Wig from Candy Costume Shop to complete the look.