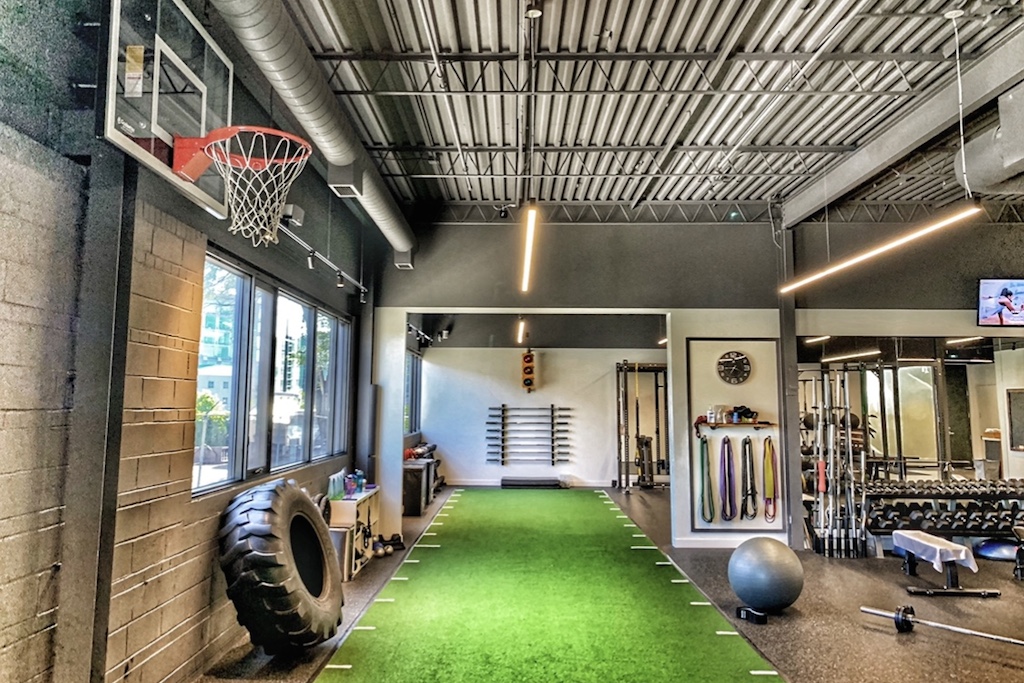 Gyms and fitness studios have been given the go-ahead to reopen, with safety measures in place, after the Ontario government’s announcement that Toronto and Peel Region can move to Stage 3. Those safety measures include maintaining six feet of physical distance between members. For those looking to get back to gyms in Stage 3 — here is a look at what local fitness studios are preparing for their clients to keep everyone safe.

Jackie Quinnell, owner of Vaughan-based hot yoga studio Modo Yoga Maple, says they’ve reduced their class sizes, along with blocking off their change rooms and showers, in order to limit contact between members and adhere to physical distancing rules. “We used to be able to fit close to 50 people in a class, and now we’re down to 16,” she says. “Our room fits five rows, and we’re also only using the first, third and fifth rows, so there’s at least six feet of distance or more from mat to mat.”

Quinnell has decided to reopen the studio on July 31 to members only, and on Aug. 7 to everyone else. They’ll be regulating numbers by requiring everyone to pre-register for classes, and are only accepting debit and credit payments for now.

Attendees are being asked to only arrive 15 minutes before class and exit class within 15 minutes in order to leave 30 minutes between classes for staff to clean and disinfect. However, Quinnell says there won’t be as much equipment to disinfect for now.

“All of our props have been put away, and our mat and towel rentals as well. Everyone has to bring their own stuff; you can’t rent anything from the studio right now,” she says.

Places like Barre Life, a studio that combines ballet, pilates and yoga, will still be providing equipment to attendees. Founder Niki Corion-Landon says they’ve increased time between classes as well in order to make time for proper disinfecting.

“Our equipment is being sanitized and laid out for each participant that’s scheduled to be in the class.” With change rooms blocked off, bringing in any personal belongings with you may be a little more difficult, so the studio will also be providing small pod stations for members to store keys and phones beside their mats.

Though Modo Yoga is a hot yoga studio, Quinnell says classes will be a little less heated than usual for now since they’ll be running the HVAC system constantly.

“I know one thing that’s really important is not to have any stagnant air in the room,” says Quinnell.

She also notes that while they’re requiring everyone to wear masks when entering and exiting classes, they won’t have to wear them while exercising. Public health officials have advised that wearing masks while exercising may reduce your ability to breathe comfortably.

Brent Bishop, founder of Think Fitness Studios in Toronto, will be using a similar policy at his studio once they reopen within the next week or so. Since they focus more on personal training, he says it’ll be easier to regulate physical distancing within the studio.

“We’re marking up separate training pods for each client trainer,” he says. For now, they’ll just be reopening for personal training, with four trainers and four clients on the floor at one time.

“We need the time to get an idea of that traffic flow so that we’re able to keep people comfortable,” he says. “I’d rather lean on the side of having fewer people and then being able to comfortably layer one or two more on than starting bigger and then having to pull back because we noticed that it’s just not flowing properly.”

Think Fitness will likely add in small group classes within the next month or so as the schedule grows and people get more comfortable.

Dimitri Giankoulas, director of personal training at Pure Motivation Fitness Studios in Vaughan, says micro studios like his have the ability to adjust their policies and setup more quickly to accommodate COVID-19 regulations.

“Most of us, we started doing virtual training right away . . . we have the ability and the capacity to change systems and programs in the club much faster than a big chain,” he says.

Sharon Xie, head of marketing at Sweat and Tonic near Yonge and Dundas, says they’ll be keeping their online options available for members for now along with outdoor sessions in case some aren’t comfortable coming inside the studio just yet.

“A lot of our members, maybe they’re comfortable with coming back once a week, but maybe not to the full extent as before, so they’ll still want to work out at home,” she says. They’ve also lowered their membership fees for now, along with making the first four days after reopening on July 31 free for anybody.

Sweat and Tonic also consulted a panel of health professionals from St. Michael’s Hospital to prepare their safety procedures for reopening.

“People are sweating and in rooms together, so we’ve upgraded the filters in our air air filtration system to be hospital grade,” Xie says. They’ve added plexiglass between each workout station, along with laminated “Clean Me/I’m Clean” cards attached to all equipment, lockers and tables that attendees can flip when they’re done so incoming members know whether equipment has been cleaned yet.

Quinnell thinks that while some may be worried about returning to physical studios right now, many have been waiting for the chance to do so and will be excited to return.

“We’ve been doing online classes the entire time and I feel like they were probably better attended when we first closed and people wanted to keep up their practice. But then I think as time went on, they were just holding out until we opened,” she explains. “The in-person experience is obviously significantly better than an online experience.”