What is going on with former chief planner Jennifer Keesmaat's first residential development? - Streets Of Toronto
Skip to content 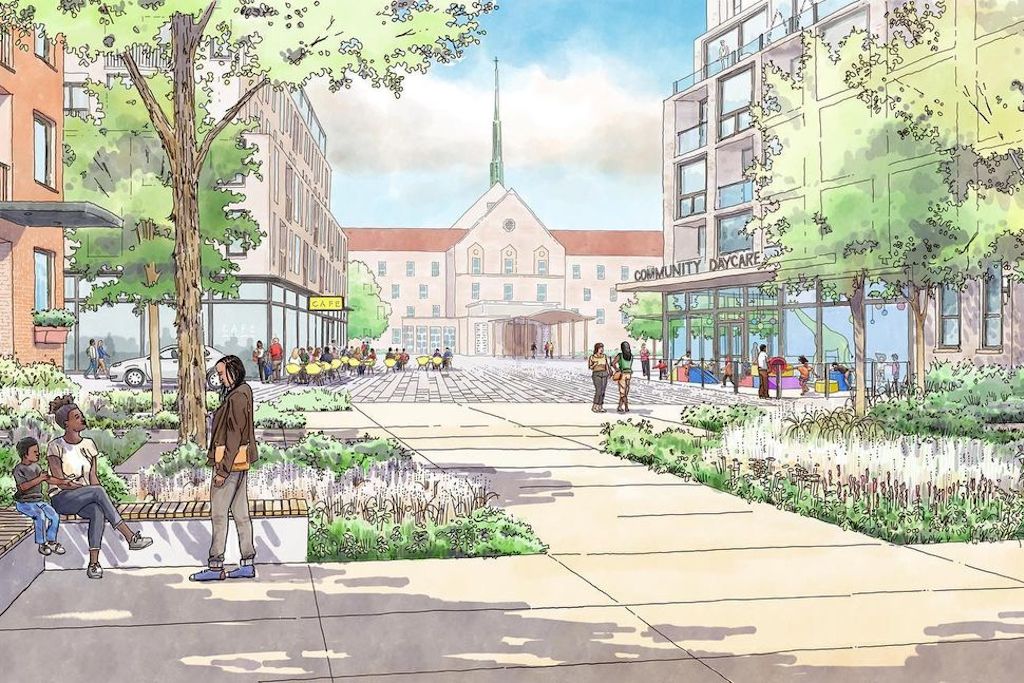 The development proposed for the grounds of Tyndale University at 3377 Bayview Ave. is being challenged by city of Toronto staff and looks set for a showdown at the Ontario Land Tribunal. The development is notable as the first project for Markee Developments, which is co-founded by Jennifer Keesmaat, the city’s former chief planner.

The Tyndale Green project on the 22-acre site includes 14 buildings. Most of the buildings range in height from six to eight storeys, with three buildings from 11 to 20 storeys. These buildings will accommodate 1,530 units, of which 50% are proposed to be affordable rental, and 50% are proposed to be market rental. It’s a large development for that area characterized more by single-family dwellings, and it requires significant changes to the city’s official plan and zoning by-laws.

There will be a slew of neighbourhood amenities built into the site with everything within walking distance. There is rapid transit to the south on Sheppard Avenue, and the hope is that a separated bicycle lane on Bayview will usher people down to the subway line to be whisked off to work.

The twin pillars of the plan are affordability, with 50 per cent market rentals, as well as sustainability.

“This site presents an opportunity to create something that doesn’t exist today, and that is a community hub,” said Keesmaat, when the plan was released last summer. “And a community where you can do a series of things within walking distance, including for the existing neighbourhood today. There will be a coffee shop on our site and a bookstore and a daycare. There will be amenities within walking distance where they don’t exist today.”

According to a city of Toronto background report, the applicant, Markee Developments, resubmitted an application on Jan. 4, 2022 with a number of revisions including two new parks, removing one building from the proposal to accommodate one of the parks, and other changes including a variable 10-metre setback to “top-of-bank,” as the development backs onto German Mills Creek ravine to the east.

Apparently, one meeting was even converted to a working group “reset.” That’s unusual.

Two days later, the applicant yanked the rug out from under the process and appealed the Official Plan and Zoning By-law amendments directly to the provincially-run Ontario Land Tribunal.

Staff comments on the Markee Developments proposal reveal a slew of issues relating to the zoning changes, natural areas, heritage impact and more. In conclusion, city staff state, “As currently proposed, the proposal is not consistent with the PPS and does not conform with the Growth Plan, and does not conform to the Official Plan. This report recommends that the City Solicitor, with appropriate staff, attend the OLT in opposition to the application in its current form and to continue discussions with the applicant in an attempt to resolve outstanding issues.”

There is also local opposition to the Markee Developments plan in the community including from Bayview Woods Neighbourhood Association.

“The proposal represents a significant densification in our neighbourhood, with over 1500 units along a small stretch of Bayview Avenue, which is already snarled with vehicular traffic during rush hour. Markee justifies this density by referencing our proximity to rapid transit and a “major transit station area,” the BWRA wrote, in a statement. “The city confirmed to us that Bayview-Steeles is not in or near a major transit station area, where intensification is being prioritized. Markee Developments is not a charity. They are a for-profit developer. They are trying to maximize the number of units on the site to maximize their profits. Good planning is about more than maximizing density.”

Although the association acknowledges that the land at Tyndale can accommodate a development, according to the them, it needs to also respect the unique nature of the site.

“This is a special property. It is not an unused TTC parking lot near a subway station where maximizing the number of units based on land area may take on more importance. This property will be designated as a heritage site and its development needs to be done in a way that protects its heritage attributes,” the statement read. “As mentioned, the neighbourhood and location are car dependent. A development of this scale at this location will result in more cars on the road. Traffic on Bayview Avenue will go from bad to worse. The neighbourhood is already overcapacity with respect to public high school space. This means that new Tyndale Green residents will need to be bussed outside of our school district. The irony is the developer plans to destroy the former high school at the site. It would be great if the school could be restored and put to good use for our neighbourhood and future residents.”

At the city council meeting on June 15, there are a number of people set to speak on the issue including Keesmaat.