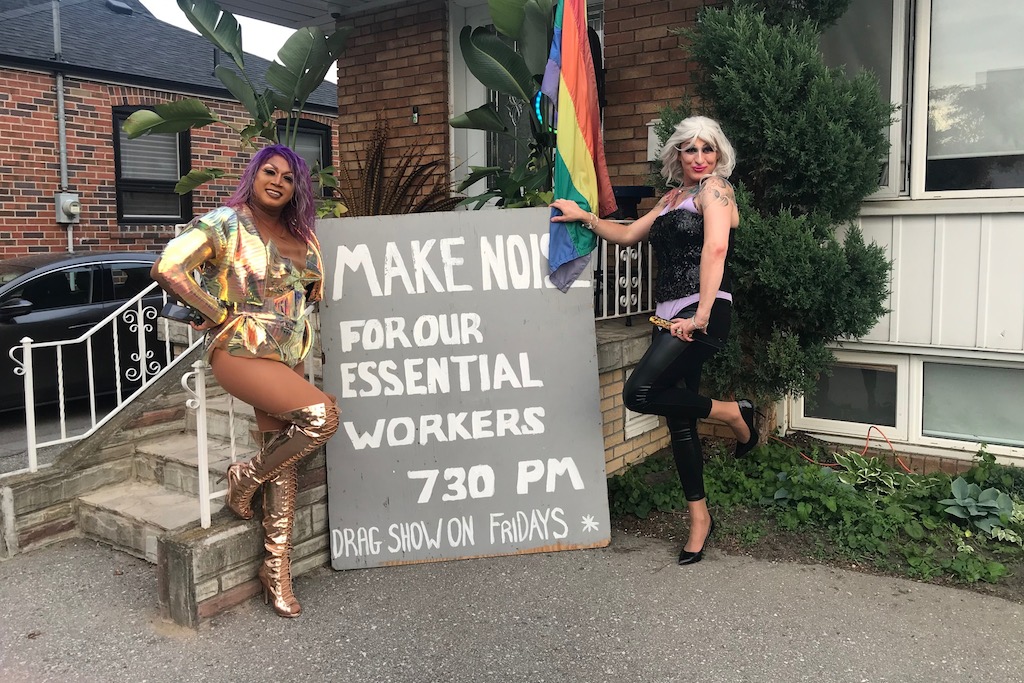 The streets of Toronto were silent in March when the city suddenly stood still. To break the silence and uncertainty, residents began banging pots and pans every night in support of essential workers. Josh Petrie and his partner Sean Teperman were part of the six-person noise-making efforts in their neighbourhood. To warm up the March weather and bring spirit to the sound of kitchen drums, Josh decided to turn Friday nights into a drag show.

“Josh (Jessyca) decided that on Fridays, he would change it up and dress in drag and perform for the five to six people,” Teperman says.

Eventually, the Bathurst and Sheppard neighbourhood heard about the performances, and people started to gather every Friday in anticipation of the next show.

“This was happening every Friday, and the neighbourhood got wind of it, and we placed a sign on the front lawn telling people what we do every Friday,” Teperman says.

A swirl of colour and life was a stark contrast to the bleak COVID-19 outlook and spring weather, and the weekly shows were something the neighbourhood seemed to need.

“As time went on, the crowds grew and grew, and the show we performed became longer. It went from 10 minutes to a half-hour to one hour as the neighbourhood all got together to put in their input about what we should do to control the street and people and what songs they would like to be performed,” Teperman says.

“Josh would design his outfits from scratch since nothing was open to purchase material required for his shows. He would design everything, and it would take him one week to figure out and put everything together,” Teperman says.

The beauty of a city in quarantine means that busy, famous personalities are home too. Petrie and Teperman took the opportunity to reach out to drag celebrities, asking them to join the weekly shows.

“We asked special guests to perform with Josh, and they came from Niagara Falls (Hairyetta) and Toronto to perform so the neighbourhood would have some change. We even had Sofonda Cox perform a couple of weeks, and we celebrated her birthday with everyone. We gave out ice cream from an ice cream truck to everyone that attended,” Teperman says.

Donations are a recent addition to the shows with proceeds going to various charities, including ACT, North York General, Black Lives Matter, and Sick Kids Hospital. Petrie decides where the money is sent at the end of each show.

For these performers, though, the show will not go on.

“As the stages of Toronto open up, the show will slowly close down,” Teperman says.

However the act will welcome another special guest, Shirley Happening, this Friday, June 26. Teperman says that “this will be once again a great show.”