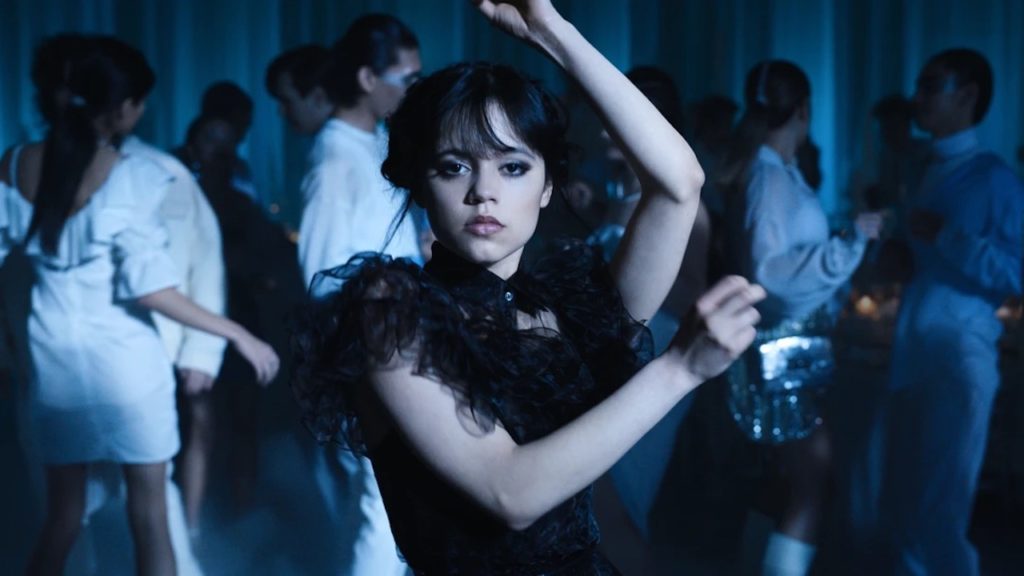 Whether it was intentional or not, Netflix released the new Wednesday Addams hit series at just the right time. The TV show, Wednesday, which follows a much more gen Z-styled version of Wednesday Addams as she starts high school, premiered in late 2022, and almost instantly, Wednesday’s goth style became a fashion moment. Whether it’s Wednesday’s lace black gown worn in the school dance scene that has since gone viral, or actor Jenna Ortega’s pitch-perfect SS23 Versace gothic bridal look at the Los Angeles premiere — complete with a black veil — the show has officially put goth back on the fashion map.

“The goth revival is no surprise as fashion continues to pull inspiration from the ’90s,” says Maggie Adhami-Boynton, CEO of Toronto-based live shopping app ShopThing. “Seen as far back as last spring during the Fashion Week runway shows, it was even sported by celebrities like Bella Hadid and Karlie Kloss at the 2022 Met Gala.”

The goth (short for gothic) trend originated in the ’80s following the punk subculture of the ’70s. Goth style borrows some elements from punk (think chunky Doc Marten boots and ripped clothing) but is made its own through its connection to more old-fashioned style references, especially from Victorian mourning attire. Seen as an eerie, mysterious and darker style and originally donned by young people who saw themselves as outsiders or misunderstood, the style includes dark and dramatic makeup, spooky and vampire-inspired looks (draped fabrics, velvet, leather, long dresses and lace).

It’s all a perfect fit for the Addams family, so much so that some consider them to be the world’s first goth family. That being said, Netflix’s Wednesday has made some changes to the classic Wednesday Addams style to update it for our current 2023 fashion sensibilities.

“Wednesday’s style has definitely evolved from the Christina Ricci days,” Adhami-Boynton says. “While many of the modern-day looks are either vintage, custom-made or fast fashion, we have spotted pieces from brands like LK Bennett, as well as a show-stopping black chiffon dress by Alaïa.”

The current goth trends opts to mix and match elements of classic goth attire with other trending modern styles — “whimsigoth,” for example, has gone viral on TikTok, and takes its inspiration from an ’80s and ’90s iteration that combined goth with bohemian and hippie aesthetics.

@lapoze_ I know you’re all loving this Whimsicalgoth series! Let me know what style you’d like to see me in! ?? #diyclothing #whimsigothic #altblackgirl ♬ Erase / Rewind – The Cardigans

Inspired by Wednesday herself and hoping to add a bit of goth into your wardrobe in 2023? Adhami-Boynton has a few tips. “If you’re not looking to overhaul your wardrobe, an all-black ‘fit, cropped leather jacket and heavy dose of black eyeliner will do just fine.”

If you’re willing to go the extra mile and invest in some versatile goth-inspired pieces, there are a few styles and fabrics that will do the trick. “As goth pulls from both punk and the Victorian era, think choker necklaces, corsetry and lace combined with a lot of edge,” she says.

Try vintage shops to look for pieces with their own gothic history; check out this lace up corset at Chosen Vintage, an all-black lace dress perfect for layering at Ninety Six Tears Vintage, or go a bit more edgy with this Danier leather peacoat and Granny Puckett Vintage.

For a fashion trend that started as a form of aesthetic rebellion against mainstream culture, it’s fitting to see goth emerge back onto the fashion scene in 2023. Sartorial choices often not only say something about the individual, but about the current culture surrounding them. “I would definitely say there’s an emotional tie-in,” Adam Boynton says. “Fashion operates on extremes, so while last year saw the arrival of dopamine dressing, Barbie-core and other poppy aesthetics speaking to post-pandemic dressing and the return of in-person celebrations, the goth adoption can be seen as a rejection of that exuberance.”