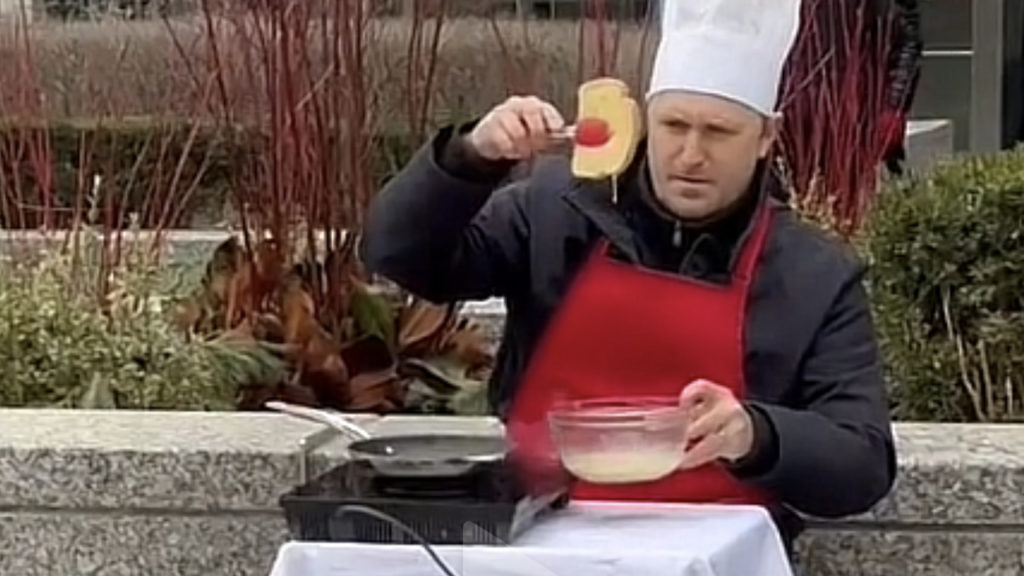 The riddle of just who’s behind “French toast” guy has finally been solved.

Last week when video surfaced on TikTok of a man riding the TTC dressed in a red apron eating what appeared to be French toast complete with white tablecloth and knife and fork the internet went wild. And the question on everyone’s minds was: Who was the elusive “frenchtoastguy?” Or was this just some kind of clever marketing ploy? Can someone really love French toast that much?

Even the TTC seemed to be in on it. In an email to the Toronto Star, a TTC spokesperson said, “Well he’s not waffling when it comes to his choice of breakfast foods, is he? We’ve seen some odd things on the TTC, but this takes the pancake. I guess it’s a testament to the cleanliness of our stations. He puts the TC (tablecloth) in TTC.”

Well, the riddle of the caped errr… aproned crusader has finally been solved.

You see, just a few weeks ago, fast food chain Wendy’s Canada announced that French toast sticks had been added to their breakfast menu. And the “French toast” guy was a clever marketing stunt to help them “celebrate a breakfast work waking up for.”

“We can all take a little inspiration from French Toast Guy to slow down and enjoy the sweeter moments of our morning routines,” Wendy’s Canada said in an email to Streets of Toronto. “Knowing Canadians aren’t ready to roll out a full restaurant setup during their morning commute, Wendy’s launched the new Homestyle French Toast Sticks, perfect for on-the-go.”

A video was also posted on their social media accounts.