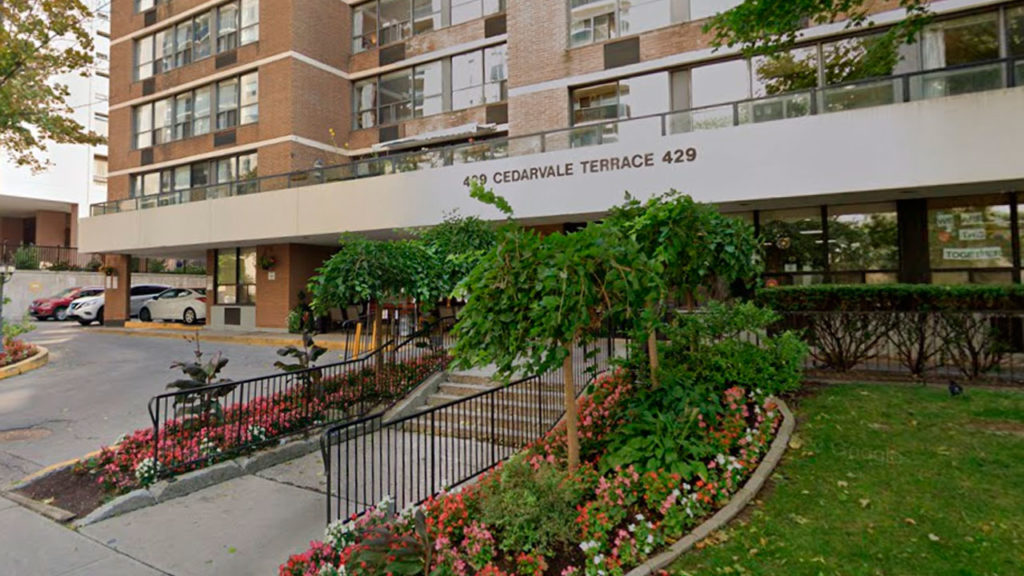 The human costs of a major push to create new housing are hitting home in midtown Toronto as a long-term care facility home to more than 145 people who have dementia, are elderly and many of who are disabled could be shipped off like cattle to make way for a 19-storey condominium development.

The six-storey Cedarvale Terrace at 429 Walmer Rd. will be torn down and a new residential tower will take its place with 87 residential units. A public meeting is scheduled for Jan. 11 to discuss the project. Barbara Chernin, who lives across the street from the building, will be there.

“With LTC buildings having their leases coming up for renewal and nothing to put in their place, your governments have managed to create a situation where the developers have an opportunity to displace hundreds of healthcare clients with condominiums in areas bursting with condo projects which incidentally, nobody wants but the developers and those they have apparently sold to already,” stated Chernin in a letter she sent to Mayor John Tory.

Chernin said, she would like to see Tory use his newly established mayoral powers to veto the project and renew the lease with the current operators of Cedarvale Terrace. And,  if that fails, she questions who will have to pay to move the residents and have them resettled in a new place.

“I think this is a key point and will involve a lot of battles between community care, the city and how they could actually approve such an application without discussion involving local health and the developers,” she said. “This could be mired in legalities for years. If this is the sign of things to come and homes like this can be removed for another condo development, then we are in big trouble as a city never mind the neighbourhood.”

The lease on Cedarvale Terrace is set to expire in June 2025.

Minister Long-Term Care @PaulCalandra
can you offer us an update on Cedarvale Terrace LTC Home?

This LTC has been in our forest hill community for 40yrs. This is home to 145 residents who call #tostpauls home.

Will you ensure they stay in St. Paul’s?https://t.co/QOUFIZxcD2

A spokesperson for Calandra commented to a local media outlet about the issue.

“If the closure is approved, Cedarvale will not shut its doors until every resident is safely relocated to a new home that meets their care needs,” said Jake Roseman, spokesperson for Calandra.

Commenters to the story on a local website suggest those developing the site should be legally responsible for replacing the long-term care beds lost in the process.

Zoning By‐law Amendment (ZBA) and Site Plan Approval (SPA) applications have been submitted to the City of Toronto by Bousfields Inc.