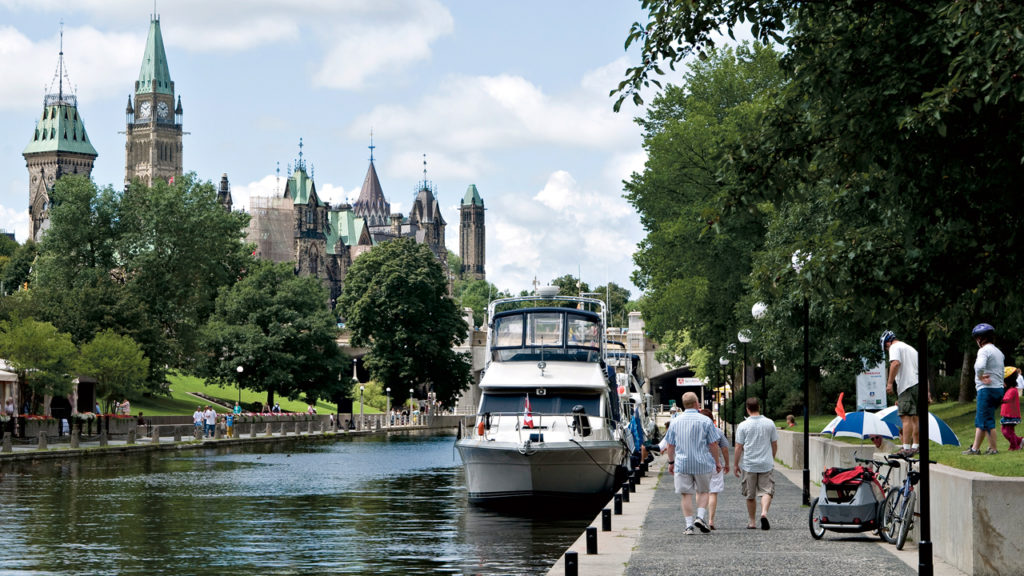 Natalie Preddie is a travel and lifestyle writer, speaker and guest expert on Cityline, Your Morning and Global’s The Morning Show.

When walking downtown in Cambridge, Ontario, you might catch a succession of red capes as Elizabeth Moss and her fellow Handmaid’s Tale cast members haunt the Grand River. This past summer, Jason Momoa was spotted in Bloor West Village between takes of his latest flick, and the cast of Suicide Squad were often spotted dining on Queen West during filming in Toronto.

Ontario has always played a lead role in some of the biggest blockbusters. With beautiful landscapes, historic towns, and bustling city centres, it is clear why this province makes the perfect filming location. Here are some Ontario locations to travel to that have been the backdrop for some of our favourite films and television shows. You might even catch a glimpse of a few movie stars on set!

Find remnants of your favourite battle scene in Kingston

With historical buildings and a long, prolific past, Kingston is an ideal filming location.

In 2019, Kingston Penitentiary hosted over 80 different shoots and has confirmed production of a new series and feature film this year, although their titles have not yet been announced. We do know that Titans, Alias Grace, Murdoch Mysteries and Star Trek: Discovery were all filmed on location at Kingston Penitentiary with great success. Book a trip to Kingston to feel a bit like a movie star yourself while going on a boat cruise, shopping on Princess Street and grabbing a slice of pizza at Wooden Heads!

Recreate that Hallmark movie romance on the Rideau Canal

Ottawa is a popular Christmas movie shoot location with its picturesque views, and you guessed it: snow. ByWard Market has unique shops, trendy restaurants, and romantic cobbled courtyards; Confederation Park feels like New York City Central Park; and Cumberland Heritage Village Museum boasts an early 20th Century church, picturesque gazebos and a rural town square, all ideal for playing a variety of locations ­– and for a vacation!

Rideau Canal, a UNESCO World Heritage Site, is a huge tourist attraction all year round, creating the ideal backdrop for boating and running in the warmer months and flying along The Skateway in the winter. With historic and cinematic architecture lining the river, the Rideau Canal creates an emblematic landscape for many productions. Famously, The Boy in Blue (starring Nicholas Cage, Christopher Plummer and Cynthia Dale) was filmed on the Canal, as was award winning Michael: Every Day. Every year Hallmark films many of their Christmas movies along the water so keep your eyes peeled for couples looking way too in love.

After a skate along the river, visit one of Ottawa’s many national museums, stop by Westboro Village for one-of-a-kind boutiques and plan a bar crawl through ByWard market.

For years, historic Hamilton has been the main filming location for many major motion pictures. Robocop, Repo Men, Detroit Rock City, Cinderella Man, Four Brothers and the Resident Evil film franchise are just a few of the famous flicks that have been shot here over the years.

With century old factories, a sparkling waterfront, a University and a vibrant city centre, Hamilton meets location requirements for many movie studios. Gage Park and its beautiful greenhouses, waterfalls, palm trees and unique subtropical plants is always a stunning backdrop. Westfield Heritage Park attracts filmmakers with its 204 hectares of woodland and meadows and 35 carefully restored historical buildings, as does Ferguson Station, a historic CN railway station that takes train passengers through the vibrant International Village down to Hamilton’s waterfront. All the elements that make Hamilton a beautiful place to visit also make for the ideal movie set!

Award winning director Guillermo del Toro has shot three films in Hamilton, his most famous being the Academy Awards’ Best Picture, The Shape of Water. His latest, Nightmare Alley, was filmed at The Cotton Factory and will star Bradley Cooper and Cate Blanchett. Next on the production schedule is The Man From Toronto, a film starring Kevin Hart, Woody Harrelson and Kaley Cuoco.

Complete your visit to this movie set hub with a trip to the Royal Botanical Gardens, a tour through the city’s best waterfalls and experience the New York Times–approved culinary scene at the Heather, Quatrefoil or Saint James Espresso Bar.