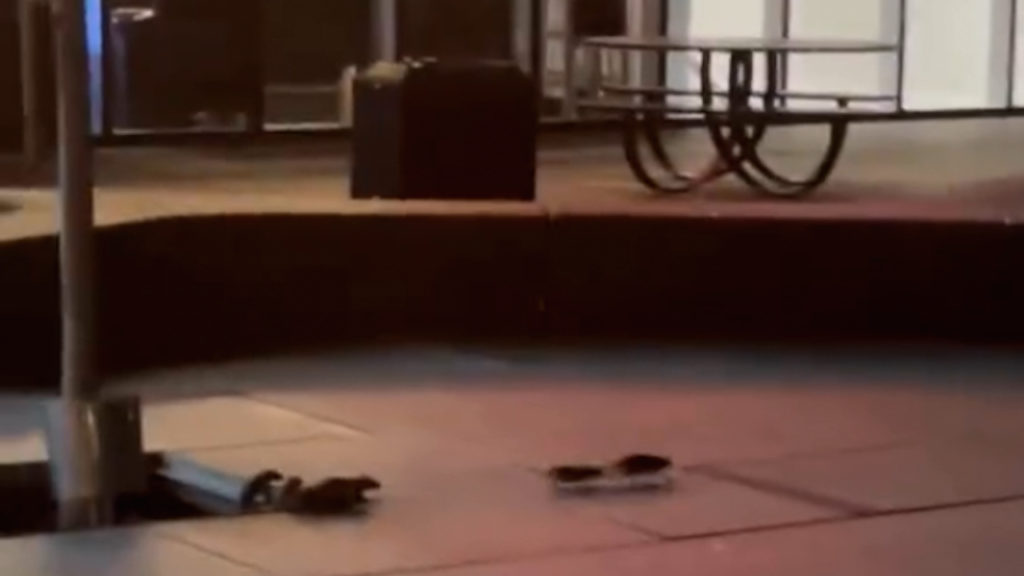 A video showing a mischief of rats (yes, that’s a group of rats) hitting the streets at Yonge and Eglinton in front of a local restaurant has been the talk of social media over the past 24 hours.

A video posted to our Instagram account, which has been viewed more than 200,000 times in less than a day, shows the rats coming out of a hole in the sidewalk in front of a Burgers Priest outlet.


Last year, Toronto was ranked the top city in Ontario for rats by pest control company Orkin. And, it seems as though things are only getting worse. It has been reported that the recent incident could be related to ongoing underground work on the Crosstown LRT at that intersection, although that has been happening for years and people have been posting comments about a rat’s next at Yonge and Eglinton for just as long.

The NE corner of Yonge and Eglinton is a rat’s nest. The rodents hide among the roots of the street-trees.
Of course they only come out at night.

In a blog post, Orkin also suggested that rats are displaying new behaviours as a result of the pandemic, which took away its main food sources.

“Anecdotal evidence shows that rodents may have become more aggressive, as the concept of ‘survival of the fittest has become more prevalent due to a lack of resources,” they wrote. Which could mean more brazen street raids by these scurrying little bandits.

Still, that didn’t stop Torontonians from taking to social media to express alarm, disgust, and seize the opportunity to offer up some choice Ratatouille jokes not to mention a few pest service companies taking the opportunity to drum up some business.

“we always wanted to be NYC we finally made it,” wrote @dave_playacabana, while @acndesign commented “Rémi’s opening a new Rataouille Restaurant!”

Whether you find the rat video amusing, horrifying or somewhere in between keep in mind that there is nothing ‘rat-ical’ (had to) about this happening in a city, especially one the size of Toronto. And it’s something that has been ongoing in the midtown area for years.