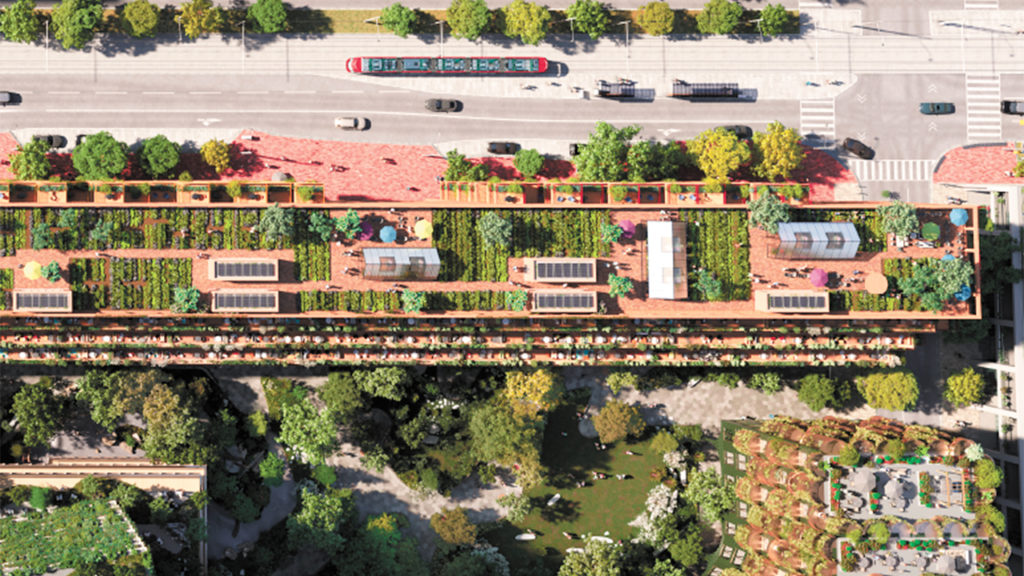 Condominium amenities used to be fairly simple. There was a party room, maybe a fitness centre. Then things changed when condo living took off. Now, the latest amenity not only fills a void often associated with sky-high living — namely, getting your hands dirty in fresh soil and growing things — it not only benefits those who use it, but could turn out to offer greater benefits for the city at large.

Call it urban farming or rooftop gardening, but it is, ahem, growing like a weed.

Joe Nasr, PhD and certificate instructor and associate researcher at Ryerson University, is an independent scholar, lecturer and consultant based in Toronto who has been exploring urban agriculture and food security issues for 25 years.

He says the trend of growing food on building rooftops is now taking off, but has been here for the better part of two decades.

And it’s one that extends well beyond residential building rooftops. But this is an area that is expanding.

Waterfront Toronto recently gave the city its first look at the upcoming Quayside development and jaws collectively dropped. Not just as a result of the scale of the development, but also the forward-thinking nature of the buildings and amenities. One thing that stood out as a growing trend that could have many benefits for the city and its residents is urban farming.

The world-class development, located on a 12-acre site at the foot of Parliament Street and Lake Shore Boulevard East, will be the country’s first all-electric, zero-carbon master plan. Following an international search, Waterfront Toronto announced that it will begin negotiations with Dream Unlimited Corp. (Dream) and Great Gulf Group, known as Quayside Impact Limited Partnership, for developing the downtown Toronto site.

“Today we take an important next step in unlocking the full potential of the city’s waterfront. Dream Unlimited and Great Gulf together with their team of architects and local partners have a strong proposal to make Quayside and Toronto’s waterfront among the best in the world,” said Jack Winberg, chair of Waterfront Toronto’s Investment and Real Estate Committee (IREC).

As part of the Quayside development, an urban farming operation will be stationed atop a mass timber residential building. But, according to Waterfront Toronto, details of the operation are still taking shape.

“The farm will be situated atop the mass timber building designed by Adjaye Associates,” said Simon Bredin, a spokesperson for Waterfront Toronto, although no further details are available just yet.

He explained that one of the first buildings to adopt an urban farm on its rooftop back in 2006 is located at 60 Richmond St. E., and that there are approximately 20 such operations on buildings around the city.

Here, located on the sixth floor, is a productive garden utilized not only by residents, but also a main floor restaurant that grew some products that were used in the kitchen.

Buildings such as the Logan condominium on Queen Street East in Leslieville and the Artsy Condo in Regent Park also have urban farming amenities.

Both examples are from builder Daniels Corp., which Nasr cites as a particularly innovative company in this field.

“The potential is starting to be realized, through some recognition by the builders, that this can be an amenity that many residents appreciate,” said Nasr. “The leader in this regard has been Daniel’s Corporation and what they have done in particular in Regent Park. Many of the new buildings being built in the phases that have been completed so far have essentially a community garden on the roof for the residents. And this has also been picked up by some of the buildings being developed by the Toronto Community Housing Corporation.”

Another development with urban farming is the Plant on Queen West, which opened in 2020. One of its featured amenities is residential garden plots on a third-floor terrace.

Nasr explained that, as an amenity, how it works is that residents can be assigned a garden bed to develop as they see fit, just like the many community gardens in the city of Toronto.

“You have the ability to plant certain things that you might, you know, if there is some particular cultural background, you might plant those things that are hard to get,” he said.

There are many ways in which developers are including gardening opportunities. Urban farming amenities can also include an internal greenhouse such as the one at the Plant, which cultivates seeds and plants.

Moreover, each suite at the boutique 10-storey building incorporates a micro garden bed and a terrace for growing crops. If the trend continues to grow, it could mean a deal more than a pleasant hobby.

“There are various broader benefits of urban agriculture that are recognized by now and those are more general,” Nasr explained. “In the case of residential buildings, they [the gardens] are brought into denser areas where there would be no alternatives, but at the same time greening the roof.”

Urban agriculture could become a viable local food source, especially when looked at beyond simple residential construction to include the barren rooftops of commercial warehouse and manufacturing businesses as well as institutional buildings.

“It is becoming larger. There’s more commercial and more investment pouring into it internationally,” he said.