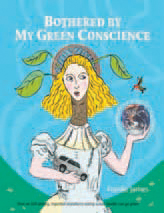 WHEN FRANKE JAMES was told that it was illegal for her to build a green driveway at her North York home, she was flabbergasted. How could “Toronto the Green” turn down such a proposal?

After the initial shock wore off, James set to work convincing the city to use her driveway as a pilot project, chronicling the experience in an inventive new graphic novel/book entitled Bothered by My Green Conscience.

To make a contribution to a cleaner, greener world, she would follow what has since become her mantra: “Do the hardest thing first, before you change your mind.” She didn’t start swapping light bulbs or switching to recycled paper stock. She sold her SUV and changed her life in the process.

“Because we didn’t have a car, we didn’t need a driveway any more, so we wanted to get rid of it,” says James, a visual artist.

“We thought we could plant wildflowers and had this very romantic and funny idea. We didn’t want to get complaints from the neighbourhood, so we contacted Coun. Stintz, who had an inspector pay us a visit.”

James found out about the illegality of her proposed green driveway, despite Toronto’s reputation as a green city.

“He told me, ‘Lady you don’t live in Toronto, you live in North York and these are the rules,” says James.

After appealing to the city, James’s driveway scheme was given the “green” light as a pilot project. Over a weekend, James and family replaced their concrete front yard with PermaTurf, a flower bed and trees.

“We calculated that our green driveway saves 10,000 gallons of storm water in addition to recharging groundwater and nourishing plants and trees,” says James.

James would draw “visual essays” of the experience, which eventually caught the eye of the folks at New Society Publishers, who contacted her about publishing the essays.

“I want to use my artwork as a way to raise awareness about the need for people to take personal responsibility for climate change,” says James, who sees climate change as the defining issue of the 21st century. For info, go to James’s blog at www.mygreenconscience.com.

WHAT IS ACTRESS LAURA VANDERVOORT READING?

“Currently I am reading the novel Mary by Janis Cooke Newman, about Abraham Lincoln’s wife’s life. I was drawn to it initially because I love the era.… Also, I’m close to finishing the book Always Looking Up: The Adventures of an Incurable Optimist, by Michael J. Fox. I adore Michael J. Fox. Another reason was to try to learn to be more like him — an optimist, especially in this industry!

Vandervoort stars in The Jazzman, premiering this month at the Montreal World Film Festival.

Howard Shrier
A follow-up to the successful Buffalo Jump, High Chicago continues the adventures of Toronto private detective Jonah Geller. The setting is Toronto, the plot hinges on the development of the long-neglected waterfront. What could be more authentically local than that? Shrier is one of the most exciting new voices in the mystery genre. This sophomore effort is sure to please.

Shani Mootoo
Valmiki’s Daughter explores a Trinidadian family headed by renowned doctor Valmiki, who is trying to understand his daughter Viveka, who is struggling to find herself and escape the smothering of her father. A simple novel about family explodes in a number of directions: class, race, sexual identity and more. Mootoo, a Toronto resident, is a Giller Prize finalist and an exciting voice in Canadian literature.

THE BEST OF MEN

Claire Letemendia
A page-turner, Toronto’s Claire Letemendia brings the battlefields of the 17th century back to life through the eyes of Laurence Beaumont in her stunning debut novel. After six years fighting and then escaping war in Europe, Beaumont is drawn back into battle in his own English backyard when King Charles I and his parliament come to crisis.