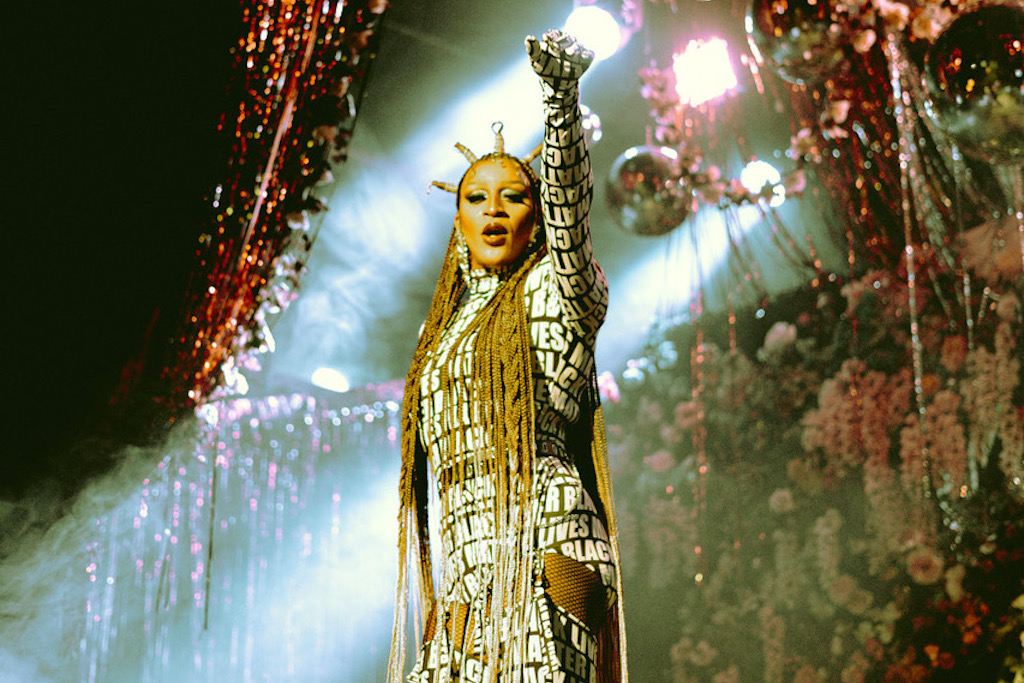 Known best for her captivating performances and starring role in the first season of Canada’s Drag Race, drag entertainer Tynomi Banks is a force to be reckoned with. As the first drag entertainer to perform in Dundas Square during World Pride 2014 and appear at the Canadian Screen Awards, Banks is no doubt a trailblazer, a leader and a changemaker at the forefront of her art.

With her unique and fearless ability to be herself while advocating for the causes that matter most to her community, Banks is now using her voice to amplify the anti-racism movement by partnering with Black Lives Matter Canada on an exclusive line of merchandise. Featuring T-shirts and hoodies designed by Black artist and visionary Sydney Mia Gittens, the launch of the line coincides with Black History Month, during which a portion of the proceeds will go towards dismantling all forms of anti-Black racism, liberating Blackness, supporting Black healing and affirming Black existence.

“I’m very honoured to partner with Black Lives Matter Canada and do my part in spreading awareness of racism,” Banks says. “Black History Month has always meant so much to me and I have tried to use my voice to talk about the BLM movement and amplify other voices with similar messages.”

With simple yet powerful designs including black graphic T-shirts with the messages “Protect Queer Black Youth,” “Anti-Racist” and “Black Lives Matter” as well as a hoodie and T-shirt sporting an iconic image of Banks holding up her fist in a striking pose of strength and solidarity, the collection is bold, chic and timeless.

“Canada was founded on and is built from the vision and labour of Black queer and trans individuals and communities. Working with our community is at the core of what we do,” says Black Lives Matter Canada in a press release. “We welcome this opportunity to collaborate with Tynomi to raise awareness for our movement and to proudly state: Black Trans Lives Matter! Black Queer Lives Matter! All.Black.Lives.Matter!”