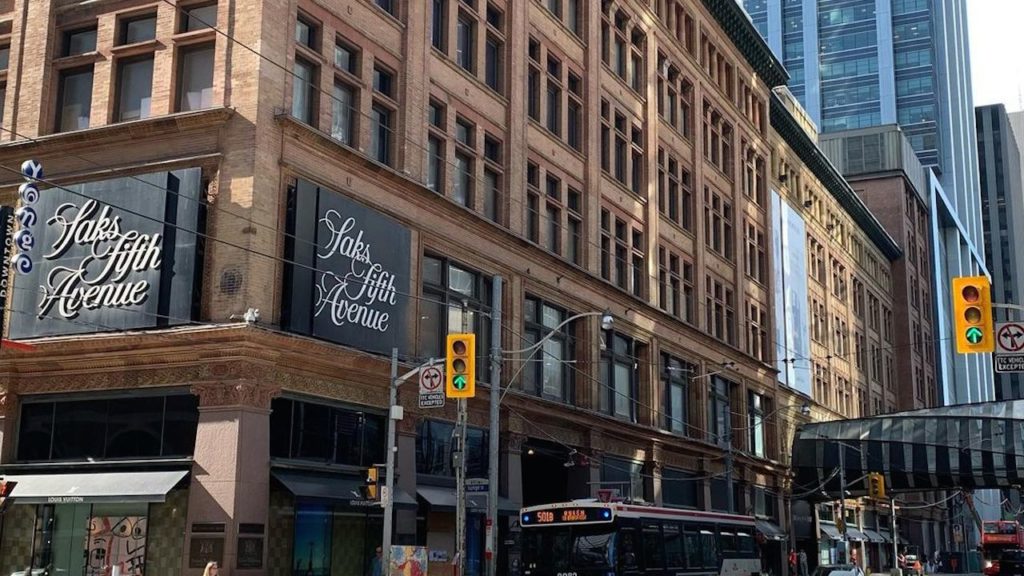 Toronto’s Saks Fifth Avenue underwent a major transformation earlier this year when Saint Laurent, Louis Vuitton and Christian Dior all exited the Queen Street location within weeks of each other and Burberry followed suit in the fall. The closures meant Prada was the last remaining handbag and accessory concession left on the main floor of Saks. While the high-end department store has been missing some of its most popular boutiques all year, it has finally replaced them with some pretty great new luxury brands.

The former Dior store was downsized according to Retail Insider, and has been transformed into an Alexander McQueen handbags and accessories boutique. Thanks to the downsizing, there’s also a small new Versace handbag shop to enjoy next door.

Despite rumours that Balenciaga would be exiting Saks Fifth Avenue after opening two standalone storefronts in the city, the brand is not only staying, but has expanded into the former Saint Laurent handbag storefront. The new Balenciaga spot houses handbags and accessories as well.

The Burberry women’s fashion boutique space has been replaced by a Ralph Lauren boutique, apparently using the exact same design and carpeting that Burberry used.

Burberry exited Saks and other multi-brand stores in Canada, including Nordstrom, to create a more “exclusive brand image” that would focus on selling within their own retail spaces.

But when Louis Vuitton, Dior and Saint Laurent closed their doors earlier this year, it was at a time when at-home and hybrid working models had become the norm, and with cancelled events and lockdowns in the past, consumer tastes had changed. A focus on comfort and casual contributed to the rise in athleisure, and it’s possible the need for designer handbags and shoes has taken a backseat to comfort and practicality- first designs.

Beyond that, reduced foot traffic in stores has companies of all sizes paying exorbitant rent asking the question – is a brick-and-mortar shop really necessary? Mere weeks into the pandemic back in March 2020, several luxury retail storefronts, including Louis Vuitton, Dior, Fendi and Jimmy Choo, closed up shop permanently in New York City.

Louis Vuitton, Christian Dior and Saint Laurent all opened within the same year of the opening of Saks Fifth Avenue’s first Canada location in Toronto in 2016.

Despite changing tastes and an initial dip in profits, sales for Louis Vuitton and Dior, both LVMH-owned brands, have appeared to bounce back in certain countries, including Japan, China and the United States. In fact, LVMH reported growth was up by a reported 46 per cent in the first nine months of 2021 compared to the first nine months of 2020. The fashion and leather goods business group reported double the amount of growth compared to other sectors.

Despite Dior and Louis Vuitton’s rebound in countries like China and the U.S., it doesn’t seem to be enough to replicate the same surge for the Saks brand. Saks had planned on a national expansion into Montreal and Vancouver, but it’s rumoured these plans have been halted due to weak sales performances across the country.

But with new high-end brands moving into Saks now, the company may be bouncing back. With a major restructuring that has seen the entire second floor devoted to menswear for the first time, women’s footwear moving down to street level and reduced hours, maybe the changes are just what the brand needs.

Shoppers can still get their Louis Vuitton, Saint Laurent, Burberry and Dior fix in Toronto, inside the Bloor Street and Yorkdale mall Holt Renfrew locations, as well as at their standalone storefronts on Bloor.