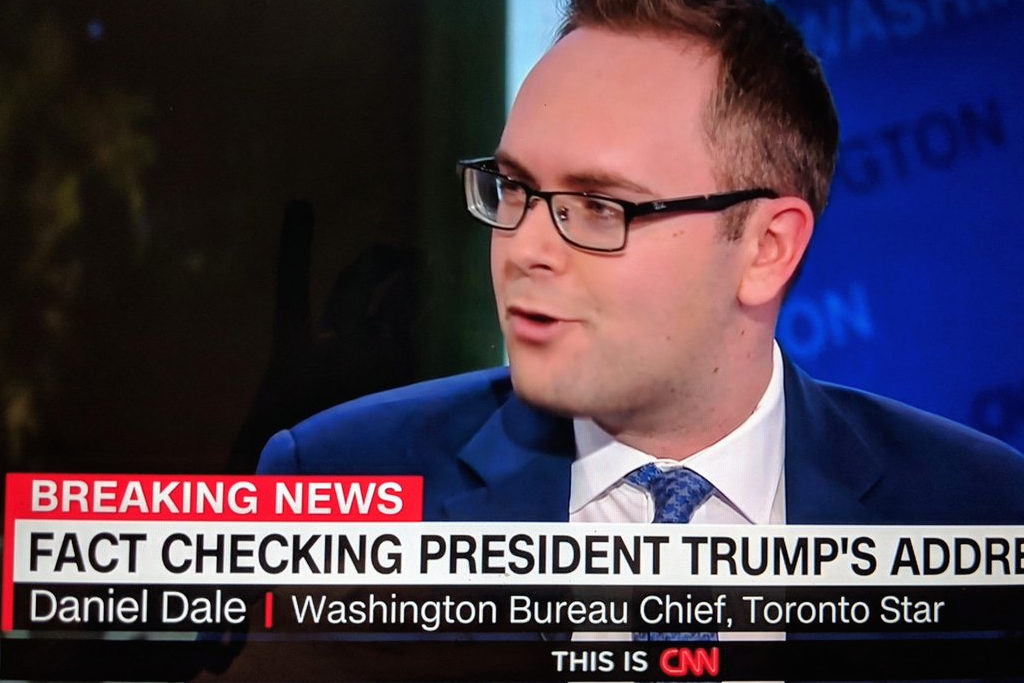 Thornhill native Daniel Dale became an international sensation by fact-checking every word coming out of U.S. President Donald Trump’s mouth — many of them bald-faced lies, apparently. Now, he’s taking the show on the road to one of the biggest news networks in the world just in time for another American election. Post City spoke to Dale ahead of his move south of the border.

How similar will this new role be to your role at the Toronto Star?

I’d say it’s an evolution of what I was doing at the Star. The fact-checking I did was overwhelmingly on Trump, and I was doing most of it on my so-called downtime. Now, this will be a full-time fact-checking role and broader than just Trump; although that will remain a heavy focus, as Trump is a president who is frequently inaccurate. But I will also be fact-checking the Democratic candidates, for example.

And what do you think the biggest challenge will be?

Well, I think I’ve become an accidental expert in Trump’s dishonesty since I have to read every single thing he says. I know the false claims cold and can fact check some of the better known ones in 10 seconds. But it will take some time getting up to speed with the Democrats and others. I can’t just be an expert on one guy anymore. It’s always challenging. Even with Trump, the facts can change very quickly. Being on-air right after a big speech or Democratic debate will pose new challenges.

Have you ever given any thought to your own personal safety?

I’m not afraid in any way. I don’t have any real fear. I think everyone who works in Washington media has probably thought about that kind of stuff at least briefly at this point. I mean, bombs were sent to CNN. But I feel fine, and I’m sure everything will be all right. But it is something in my mind for sure.

What have been your interactions with Trump himself?

I’ve never interacted at all. Although he did block me on Twitter, which is the closest I’ve come. Even his team has taken an extremely hands-off approach and basically pretend people like me don’t exist. Much of their base are not consumers of the Toronto Star for sure, not even CNN. I think the philosophy is “Let’s just let these fact checkers say what they want, and we will get our message to our people through other means like FOX News or Breitbart.”

You must have quite a few favourite lies at this point?

The one that is funniest for me to fact check was the lie about the Boy Scouts. He made this unexpectedly political speech at a Boy Scouts Jamboree. He was attacking the Democrats, pretty typical Donald Trump things. And there was a lot of criticism over it, and he said something like, “No no the head of the Boy Scouts told me he thought it was the greatest speech ever given.” So I emailed the Boy Scouts thinking no way they’ll get back to me because organizations like that don’t want to contradict what the president says. But they got back pretty quickly and said, “No, never happened. Nobody called [us from the White House] and nobody [at Scouts] said that.” And the White House later admitted as much. It was my first fact check that went viral.

What were your career aspirations when you first started out in journalism?

I thought I wanted to be a sports writer. I loved the sports section, Sports Illustrated. I wrote about campus sports at York. My first internship was in sports at the Guelph Mercury. Then I worked the city hall beat with Rob Ford as mayor in late 2010, and it was just so interesting.

What did that experience teach you about covering politics?

There is a lot to learn there. I think one big thing was learning how to deal with covering a politician who is coming after you and your publication: to try to maintain your professionalism and be aggressive but fair while someone was trying to get us arrested, in my case, or get us fired or stop advertising in the paper.  That’s the origin story for fact-checking Trump.