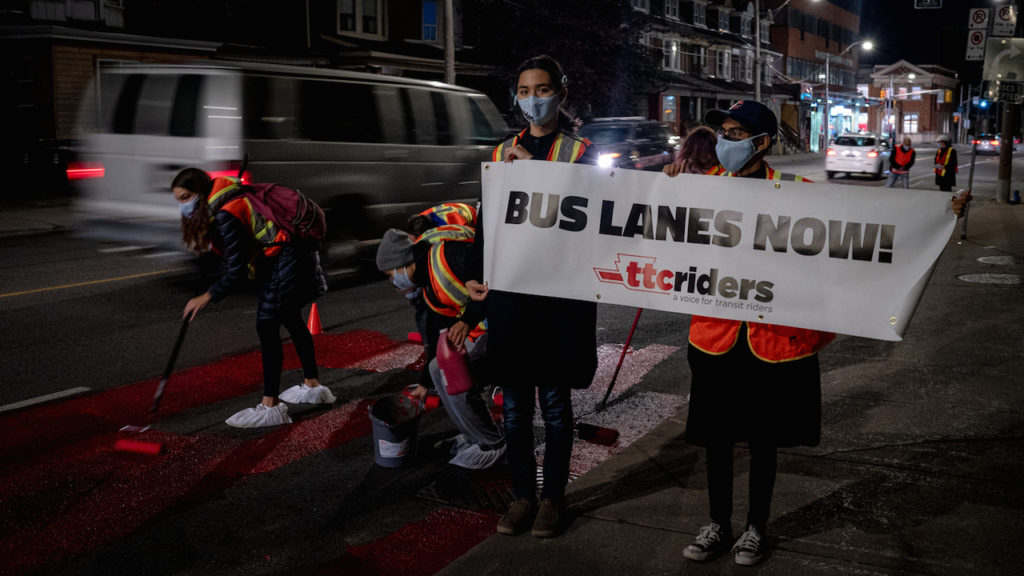 Transit advocacy organization TTCriders took to Dufferin Street this morning to install a temporary bus lane in a statement against John Tory and the city of Toronto.

“It took a handful of volunteers 20 minutes to do what John Tory hasn’t been able to accomplish in eight years,” said Vincent Puhakka, a TTCriders member, in a press release.  “Surely Toronto’s Mayor and City Council can move faster to prioritize buses and streetcars, not just here on Dufferin, but across the city.”

According to the group, bus lanes result in faster and more reliable transit service. This, in turn, encourages more people to take transit, reduces greenhouse gas emissions and lessens traffic congestion. That’s a win for everyone.

“This pop-up will wash away soon, but our need for more bus lanes will remain,” Puhakka continued. “Rapid transit projects are years away. Giving priority to buses and streetcars will help tens of thousands of people and can be done cheaply and quickly.”

The group has asked the city to install 10 bus and streetcar lanes in the next four years. In addition, they are asking Toronto residents to take a transit pledge to vote for candidates committed to “increasing TTC service, lowering fares, and prioritizing transit” before the municipal election on Oct. 24