Tour de Green Line: A look at the linear park project that could transform midtown neighbourhoods - Streets Of Toronto
Skip to content 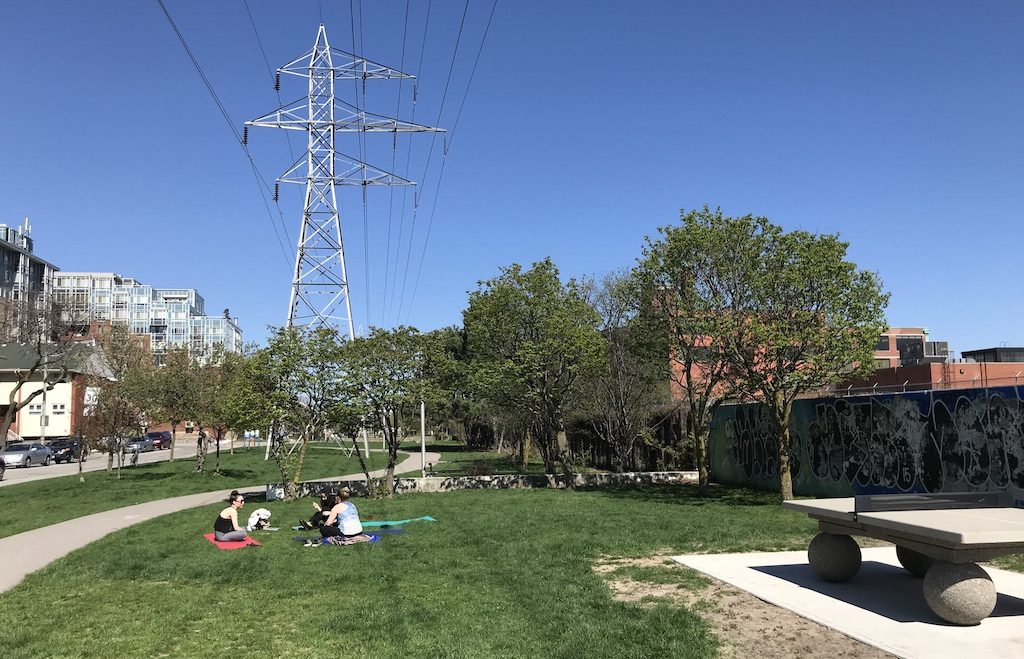 The Green Line is a proposed linear park system that would run from Lansdowne and Davenport to where Spadina Avenue runs under the CN rail line just north of Dupont. The City of Toronto just hosted a public information meeting on April 23, with nearly 100 people in attendance, to present the draft conceptual master plan for the project, according to Nancy Chatter, senior project coordinator.

“We have received lots of very positive feedback from participants,” she said.

As the implementation plan goes public and the wheels of municipal governance slowly creak forward on the project, I hopped on my bicycle and took a tour.

Staring across the street from the corner of Lansdowne and Davenport into a scrubby looking dirt farm behind a townhouse development, giant hydro towers competing for space with litter and a dandelion wine crop, it’s hard to imagine the site as the potential western terminus of the Green Line.

Moving down the corridor, through a series of neighbourhood parkettes and parking lots, Katrina, like many residents along this stretch, is out walking her dog on a swath of green. She’s lived in the area for more than 15 years and is supportive of the Green Line plan and would like to see a mixed-use trail system developed along its length to facilitate commuting through the area by foot or pedal.

“We are lacking in green space in this part of town,” she says. “None of the ravines run through this part, sadly. You have to go all the way to Spadina.”

The parkettes in the northwest section of the planned route are largely developed, or at least there is grass, play structures, a well-used dirt trail and recycling/waste bins. It’s about as good as it gets, but leaves much room for improvement.

“This stretch is really great,” she says. “We go the other way (southeast) and it’s pretty untended, some of it is landscaped and kid friendly, some is open field and some is parking lot. It is a sporadic, truncated connection.”

The further along the route, even crossing streets becomes problematic and at one point requires sneaking in between a fenced in hydro tower and an eight-foot chain link fence topped with barbed wire to make it to the alleyway entrance of a parkette no larger than an average Forest Hill backyard.

The plan is to connect all of these random fragments of greenery, parkettes, dirt farms, community gardens, and alleyways along the route to create as continuous a route as possible, given the circumstances.

Approaching the suddenly trendy area along Geary Avenue, stopping for a caffeinated refreshment at the venerable Dark Horse, the corridor arrives at the CN rail line and veers east for a straight shot to Spadina. Along the way, there are scrub fields, pretty parkettes with wading pools and play structures, the tiniest little soccer fields one could imagine, community gardens and the like as well as major street crossings such as Ossington and Dovercourt to hurdle over, ending with a massive TTC facility east of Bathurst.

Meeting a cyclist resting in an empty field, he informs me that not only has he never heard of the Green Line, he has also only ever seen cyclists motoring by on the service road along the CN rail line, which is of course illegal and often results in hefty fines.

Here is where the real work will begin for the Parks People project, building a network of community support for the project, dealing with large-scale facilities such as the TTC,  and deciding whether or not to build bridges over some streets, or veer onto the road and take long detours around encumbrances.

Linking existing parkettes is easy, and this is what will get the ball rolling, but the real work is years away.

The Green Line was developed by the organization Parks People, and has been embraced by the City of Toronto, which is developing the plan with plenty of opportunities for input from local residents. Most of the land along the route is owned by the Province and is overseen by Hydro One, some of which is leased to random parking lot operators and other businesses.

It’s an ambitious project and if successful could certainly be put to good use by residents that don’t have a lot of open space readily available or large yards of their own.

The success or failure of the project could very well sit with the folks at Hydro One.

Parks People executive director Dave Harvey said that the provincial agency is, perhaps not overjoyed, but at least at the table and willing to dialogue, which is a step up from the past. The trick is that it is a hydro corridor and there needs to be full and unencumbered access to the electrical infrastructure at all times.

Inevitably, there will be significant conditions around the building of structures and things like that, according to Harvey.

“What they (Hydro One) will and won’t accept, in the past, it was nothing,” said Harvey. “It has been so great to see them working with the community and the city on how to move forward with this.”

The issues with street crossings, according to Harvey, is that in extreme heat power lines sag, and if a bridge is built under them, Hydro One is concerned that, well, you get the idea. It could cause a serious problem.

But, part of the appeal of the Green Line is the possibility of that long meander down an uninterrupted stretch of natural, open space right where one might least expect it.

“Part of our goal is to find ways to escape a little bit from the city, and having these connections just gives a very different type of experience,” said Harvey. “Going for a walk or a stroll and you can really decompress. You act differently, think differently.”

With the new implementation plan, the strategy is to concentrate on the lowest hanging fruit along the Green Line. To make the connections now and, as Harvey said, “get going with it sooner rather than later.”

According to Chater, if all goes well with Hydro One, "we anticipate to have shovels in the ground for the first projects by 2020."

For more information or to get involved with the Green Line project go to www.parkpeople.ca.