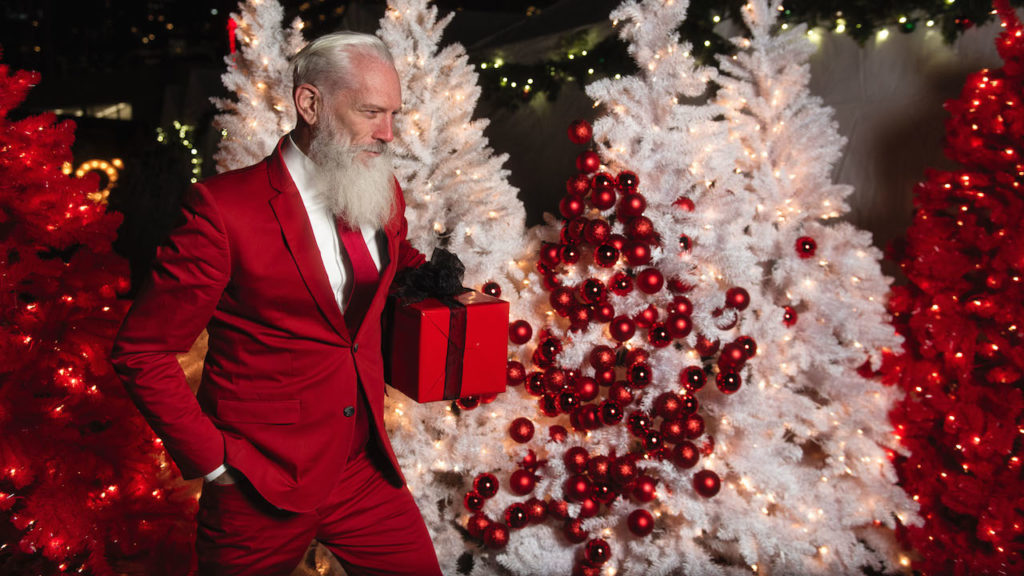 He’s got a big white beard, wears red suits — especially around Christmas time — and brings joy and happiness to . . . adults? This is not your average Santa Claus.

Paul Mason, better known as Fashion Santa, what some may consider the new and improved Santa is bigger than ever. He looks expensive, dresses expensive, has a gravelly voice and has the kind of tall and suave stature that commands a presence. But Mason is careful to point out that he’s not trying to replace the O.G. Santa. “I’m not trying to compete with the old Santa. My Santa is just a more fashion-savvy, adult version,” he says.

Fashion Santa exploded onto the scene in 2015 with an ad campaign for Yorkdale mall that went viral, hitting three billion impressions, according to Mason. It was enough to draw the attention of Justin Beiber, who stopped by the mall to take a selfie with Mason, adding to the media frenzy.

But the story of how Mason got there is a sad one. Before all this, he was modelling in New York, landing campaigns with big names like Macy’s and Dolce & Gabbana and signed to Ford Models. But in 2008, his mother was diagnosed with cancer. Mason moved back home to become a full-time caregiver for her, and she passed away five years later.

“In the grieving period that I had, I stopped working and stopped shaving altogether,” he explains. As time went on, he let it grow into a beard. “In fashion, it’s nice to have different looks, and I was liking what I was seeing. I didn’t even know how to grow a beard, but I just let it happen.”

Mason put his fashion background together with his new look, creating Fashion Santa and pitching it to a few retailers. If you’ve ever seen a photo of Mason, you’d see why — the resemblance is certainly uncanny.

After the campaign went viral, Mason says he was getting stopped on the streets for selfies constantly. It was important to him to figure out a philanthropic tie-in for the work he was doing — perhaps in the spirit of Old Saint Nick himself  – so Yorkdale vowed to donate one dollar to SickKids for every selfie people took with Fashion Santa if they used the #FashionSanta and #Yorkdale hashtags. His relationship with Yorkdale was severed after they both applied for the Fashion Santa trademark, which Mason eventually won in a legal agreement that he had exclusive rights to the name.

Mason believes the visibility of that social media campaign is what launched him into what appears to be permanent stardom.

He’s certainly not the first chiseled man to grow a white beard, but Mason says there might be something slightly sacreligious about an icon as famous as Santa that scares people off from doing what he’s done.

“I don’t think people want to mess with such a thing,” he says. “But I’m not trying to replace him. I’m just adding another component to the already established iconic figure of Santa.”

“Maybe if I was just out there doing advertising after advertising, it could look like a little bit of a gimmick, but a key component of what I do is charity driven,” Mason says. “So I think maybe that’s why I get a pass for trying to mess with the idea of Santa.”

Mason says Fashion Santa exists in part to bring a bit of Christmas joy back to adults who have long grown out of believing in Santa and waiting impatiently for Christmas morning.

“Doing all those selfies, it was cross-cultural. It wasn’t defined by any religion or any kind of stance. It was just a really fun idea for adults to have 10, 20 seconds of joy,” he says.

“I can remember when whole offices were coming down because they were competing with other offices to see who got the photo with Fashion Santa first,” he says. “When that kind of moment happens, it’s quite special.”

And in another, perhaps more predictable way, Fashion Santa is ripe for adult memeing opportunities.

“It’s my favourite thing to look forward to, the Fashion Santa memes that come out,” he says. “Some of them are too raunchy.  I can’t even mention them. Is that success, when you become a meme? I have no idea.”

Mason says that, at this point, he’s close to being able to work as Fashion Santa 12 months a year. For him, that’s just what he wants.


“I find now that, when I do something outside of Fashion Santa, it’s a bit confusing to the public and to my followers. I’d rather keep going with this. I’m really happy with it.”

As the resident Fashion Santa, he’s not just the expert on all things Christmas, but all things fashion too. He says holiday fashion is really fun because it can be so short-lived.

“You pull out all this stuff that you wouldn’t normally wear the other 10 months of the year,” he explains. “You’ve got all these incredible fabrics and silks and satins and patents and all these shiny, baubly things that you would never wear otherwise. And I think that’s what is kind of fun about the season.”

But ugly Christmas sweaters are where he draws the line.