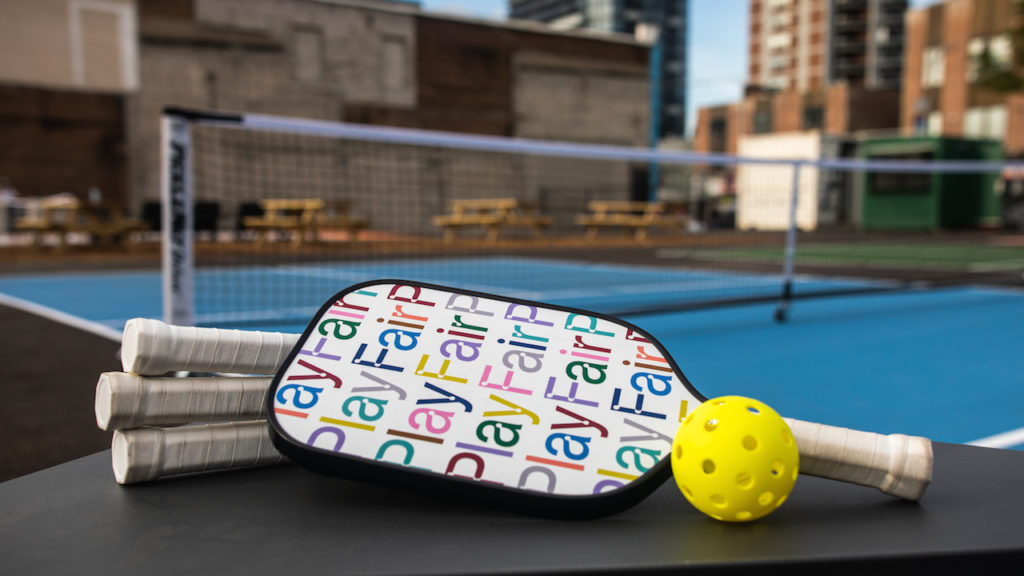 If you haven’t heard of pickleball, the sport that combines tennis, badminton, and ping pong, chances are you soon will. Known as the fastest-growing sport in Ontario, the game is already a sensation in many parts of North America, thanks to its simplicity of play, and the fact that you don’t have to channel your inner Novak Djokovic to be good at it.

While it may seem like a new phenomenon, Pickleball was created in Washington in 1965 by two families looking for something to do one lazy summer afternoon. While attempting to set up a game of badminton, they were unable to find the proper equipment and improvised with ping pong paddles and a whiffle ball and a new game was born.

Recently, a fun new pickleball facility dubbed Fairgrounds opened up in the Yonge and Eglinton neighbourhood.

If your interest has been pickled but you don’t know where to begin, we enlisted the help of Sara McInnes, a pickleball coach and three-time Canadian national medallist to get the scoop on how to start playing pickleball in Toronto.

What, exactly, is Pickleball?

Pickleball is a fun and social paddle sport played on a court that is the same size as a badminton court (44 feet by 20 feet). The net is slightly lower than tennis – 34-inches in the middle and 36-inches on the side. There is a non-volley zone (meaning, you cannot hit the ball out of the air inside this zone) which is a defined area seven feet off the net, on either side. Overall, there are some similar qualities to the game that you will find from badminton, squash and tennis, But pickleball has its own unique set of rules that make this game easy to learn but hard to master!

How do you play?

Pickleball can be played in single or doubles format and most rallies consist of a series of volleys or drop shots. The server must serve underhand and cross-court to the other team. The serve also must land beyond the opponent’s non-volley zone (NVZ). There is a two-bounce rule, meaning the first two shots of the game (serve and return) must bounce before any person can play the ball. The game is played predominantly at the non-volley line and rallies become a game of chess — teams will aim to move their opponents around, creating gaps on the court and creating offensive opportunities. Within one rally there will be many drop shots, lobs and very quick volleying. If both teams are of equal skill level, a rally can be well over 25 consecutive shots before someone creates an error or a winner. I think the longest I’ve seen is over 100 shots. Most pickleball games are up to 11 points, win by two.

What do you need to play?

You will need paddles and a ball. Pickleball balls are plastic and perforated, there are versions that are better suited for indoor play (26 large holes) and outdoor play (40 small holes). If you’re looking to create your own court, you need a flat surface, a portable net, measuring tape, and chalk or tape. Do a bit of research to find places to play on the Pickleball Ontario website. All outdoor courts in Toronto are semi-permanent, meaning you need to have your own portable net to play outside of city hours.

What are some things to consider when choosing a racket?

Most people will consider paddle weight, shape/size, brand and price. I recommend finding a retail store that offers a demo program, where you can try a few various paddles before making a final decision. Entry-level paddles will fall within the $60-$150 range, with more advanced paddles going up to $300. Overall, you want a paddle that will complement your style of play.

The ball does not compress (or bounce) like a tennis ball, therefore, players really need to get low and engage their lower body, far more than they initially realize. Always keep the paddle out in front of the body and do your best to make contact with the ball in front of the body — the object is to not let the ball pass you by. If you find that you’re playing quite a bit then I highly recommend investing in court shoes and protective eyewear. I also recommend taking lessons from a certified coach at some point during your pickleball journey to broaden your game.

Where are some of your favourite places to play in the city?

I’ve played a couple of tournaments at Hotel X where they converted the tennis courts into pickleball courts, it’s a gorgeous facility. I have set up a court on Toronto Island and having the CN Tower as the backdrop was really cool. Ramsden Park probably has one of the best current set up in Toronto, with seven lined courts — just make sure to bring your own net.