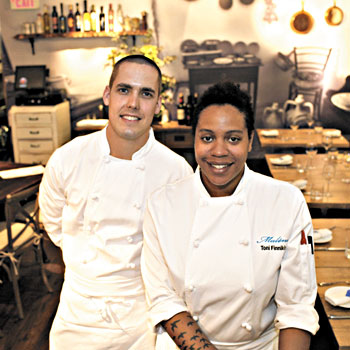 There is no mistaking the hands of experience at work in Malena: whether it lies in the warm greeting or the deft blending of one course into another, we relax knowing our hosts are sharing our good time.

It is no coincidence that this machine runs so smoothly. Owner David Minicucci is also a co-owner of L’unità, just a few doors north, and has perfected his craft there, as evidenced by the constant crowds and glowing reviews. L’Unità’s Doug Neigel moved next door to take over the kitchen at Malena, housed in a lovely building that was built in 1892. It is one of the warmest rooms we have dined in this year.  The emphasis is on Ionian seafood and the Greek accent creeps in.

We pass on the raw bar with regret as there are offerings here that are, indeed, novel to us, but we are seduced by several of the appetizers. The pull of lamb and date “polpette” is too strong. The meat and fruit have been thoroughly blended and the mix of sweet and savoury is heady, but $12 is a little steep for three meatballs. The greater indulgence is the Ionian seafood soup. We are alerted that it is a light but zesty broth with a mixture of fish nestled in a shallow bowl.

Everything arrives as advertised, but a quick count reveals precisely two mussels, two clams, two shrimps and a little chopped tuna for $16. A bit of a disappointment. Three meat dishes are offered, but when we see that fish is the banner, we go with it. There are four fresh specials this evening:  porgy, tuna, turbot and halibut.

Our informed, polished and, yes, handsome waiter steers us toward the two latter items. Malena is all about the food, and presentation is simple to the point of austerity. The halibut is all that is promised — it has been exposed to just enough heat to make it toothsome and has been barely kissed by olive oil and lemon. A few pieces of fresh artichoke are the sole accompaniment, but it wants for nothing ($25).

The turbot is another story. Though touted as rich and buttery, what appears is the opposite —watery and mushy.  Part way through this course, the waiter inquires as to our enjoyment and we are honest. Kudos for the halibut and thumbs down for the turbot. He is beyond apologetic.

A replacement is offered, but I decline. A few moments later, he reappears to tell us that the item has been removed from the carte.

Smart move since the final course is divine. A platter arrives with three of the kitchen’s best. At one end is a modern take on baklava that should have the Greeks rethinking their tradition.  At the other are two teardrop doughnuts with a cinnamon dipping cream. And then, proudly in the centre, is the reason that I will return — chocolate cannolis.

I am not a fan of the traditional version, but what appears on our plates is but a distant relative. A flaky chocolate shell is filled with chocolate coffee cream dotted with chunks of dark chocolate. Words fail. If service and atmosphere were enough, I would rave, but the food needs attention. At these prices, I expect excellence.