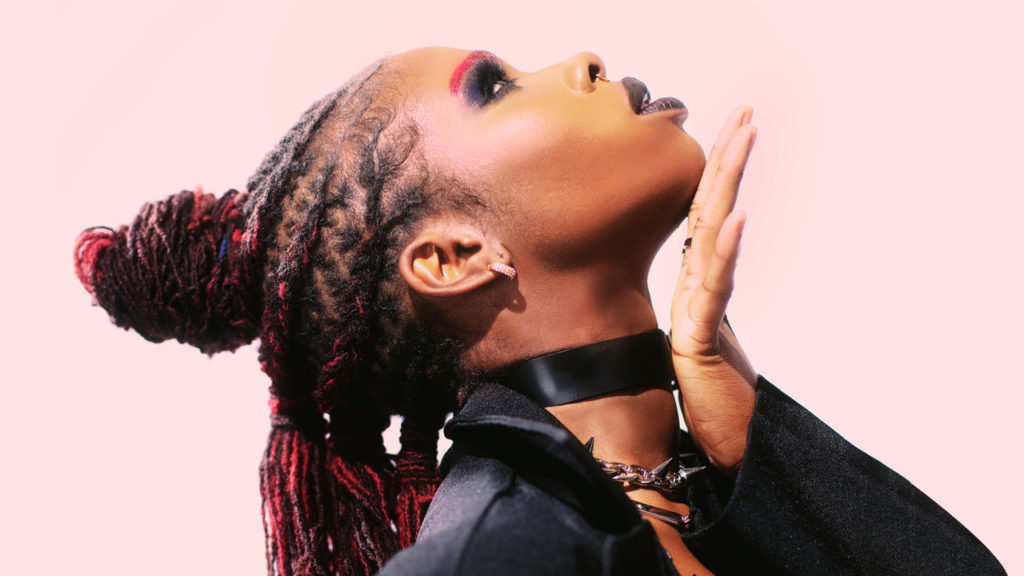 Two years after breaking boundaries and winning the Polaris Prize for her breakthrough album Thirteenth Floor, Toronto native Haviah Mighty is back with the highly anticipated follow-up Stock Exchange, a collective of singles she’s been steadily releasing over the last year. And as a way to give back for all her success, Mighty recently launched a Black-Owned Business Giveaway, with plans to donate $10,000 to help entrepreneurs get the financial injection they need to help them grow. We caught up with Mighty — fresh off her electric performance at the Grey Cup — to learn more.

What gave rise to your idea of supporting Black-owned businesses?

I was inspired by wanting to always give back but never having the means to do that. Over the years, I was making music but not really making any money off of it, and now, I’ve reached a point where I’m blessed enough to be a full-time musician and continuing to grow in chaotic, difficult times where restrictions have made it more difficult for musicians. I’ve still been very lucky to have the opportunity to keep growing my craft and keep growing my business.

What are you hoping the grants will accomplish?

Winning the Prism Prize earlier this year was kind of the turning point for me. Part of that prize was $10,000. It was unexpected capital and a big amount, and I thought, “Why don’t we just take this money and divide it and use it toward this idea that I had been thinking about.” And what’s behind the initiative is just wanting to give back. As a Black entrepreneur that’s young and literally never fathomed being in this position, it’s trying to find ways to transfer that excitement and encouragement that I’ve received that’s allowed me to believe in myself enough to do this to other people.

We’ve received so many submissions, and the reception has been really good. I’m nervous to have to go through them all and not be able to give everybody something. It’s a bit overwhelming, actually, but it’s also exciting. It means that the word is getting out and that, hopefully, people are getting that encouragement. I’m hoping that even for the people that don’t get any monetary compensation through this giveaway, that there are ways that we can still provide encouragement. Sometimes, it’s not just money that can provide that. Just having more people follow you or are aware of you can serve as encouragement, so I’m still thinking of ways to award people who may not be the winners. We’ve had almost 100 people reach out, so I’m super excited.

I understand the pandemic played a big role in making your new album.

Stock Exchange is my latest entrepreneurial installment, and it focuses on the concept of the entrepreneur trying to navigate in this time of digital perception only, and so it was inspired out of me putting these songs out from month to month. Initially, I didn’t want to put out an album. I just wanted to put songs out because it was hard for me to conceptualize an album in such unprecedented times. The idea was to put out these songs, and the way the songs were being received each month was what inspired the title of Stock Exchange and was what inspired [me for] them to come out as a collective.

You’re a role model for many. Can you speak to what that’s like?

I recognize that there’s a responsibility in what I do, and being a role model is important because people look up to you and they may follow what you do or listen to what you say or take what you say as something that they can carry with them. So, from that perspective, I feel that it’s important to be aware of how people perceive me because they’re getting that impact from me.… I’m happy because I wrote these songs with the intention to have an impact on other people so that in itself is what a role model is.

What do you have in store this year?

I have the tour with the Arkells in the month of February, which I’m really excited about. It will be good to get back onstage. That’s something that I’ve dabbled in, but I’ve never done a “tour, tour”: being on the road and not being able to go home for over a month. This will kind of feel like that but not for so long, so it will be nice to get my feet wet in that way.