Toronto’s first-ever Fashion’s Night Out was a whirlwind of cocktails, clothing and confetti - Streets Of Toronto
Skip to content 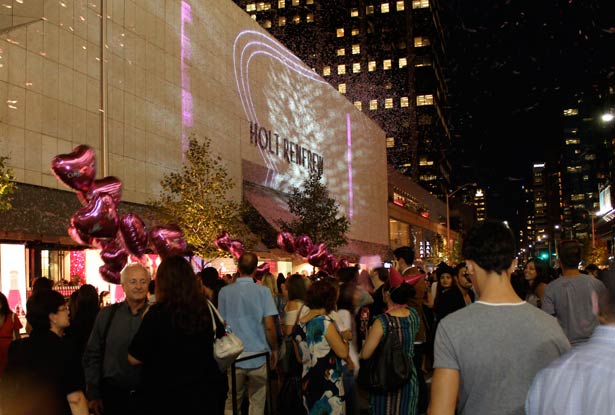 Last night Hogtown was all abuzz with TIFF, magazine launches and the inaugural Fashion’s Night Out jolting everyone out of their sleepy summer haze. We opted to check out the city’s first dalliance with FNO — the worldwide shopping event that highlights local retailers and designers.

With events based in Yorkville and around Queen Street West, some of Toronto’s best shops swung open their doors for late night shopping parties, attracting the city’s most stylish with nibblies, cocktails and deals aplenty. Lasting from 6 to 11 p.m., we stormed the streets to check out what the city’s style buffs were up to.

Up first was The Bazaar by Rac Boutique, held at the Burroughes Building on Queen West. FNO was the perfect excuse for a second installment of this particular event (the first one took place a few months ago), and saw Rac Boutique’s Glenna Weddle and Faith Orfus bringing together a bevy of local retailers in addition to up-and-coming designers. Goods from Fashion Week faves Travis Taddeo and Chloé Comme Parris — who are about to take part in NYC’s Fashion Week — sat alongside duds from the west end’s 69 Vintage, Canon Blanc, Philistine and Life of Manek. Nicole Manek’s collection of Orly Genger necklaces stood out with their unique shapes and resin-coated features. Shoppers nibbled on pint-sized cupcakes from Short & Sweet Cupcakes and sipped on blue drinks while perusing the goods.

Before heading north, we popped into a venue next door to check out goods from Chinedesign. Local designer Chinedu Ukabam is known for his bright, African-inspired designs, and one of the designer’s dresses was recently spotted on model Stacey McKenzie on a NOW's cover. Next stop was the Shopping Soirée at Yorkville’s Shops at Hazelton Lanes. There, folks were able to check out men’s and women’s apparel, including pieces from Toronto-based designer Sid Neigum, who won the TFI New Labels contest this past May. Meanwhile, a team of hairstylists and makeup artists worked their magic on makeover enthusiasts, and FLARE editors styled guests in fall gear.

The most visually impressive event of the eve took place at Holt Renfrew. After checking out some live music at Roots, we joined crowds of revelers in the nick of time as they celebrated the shopping institution’s 175th birthday. With Bloor Street blocked off between Yonge and Bay, Holts fanatics donned birthday hats, waved glow sticks and lined up for Diet Cokes — all of which were available in the emporium’s signature magenta colour. As confetti drifted over the street-side mayhem, we checked out limited-edition sweatshirts in a pop-up truck. Justin Broadbent and Alex Viau were among the graphic designers commissioned to create unique sweatshirts for the anniversary.

Our final stop was the eLUXE shindig, held at the online retailer’s headquarters on Adelaide. There, shoppers perused Smythe’s latest blazers, official Fashion’s Night Out tees and a dazzling selection of baubles. FASHION Magazine’s Randi Bergman spun tunes as lively partygoers waved a life-sized cut-out of Joe Mimran — procured from Toronto Life’s Stylebook launch — over their heads and snacked on chocolate-dipped licorice sticks. Those keen on sipping some tequila-based cocktails were forced to swill an awkward blend of tequila and energy drink instead, seeing as how the juices had been slurped up.

Although we’d planned on making it to events further west — including ones at preloved and Comrags, where Plaid magazine editor Odessa Paloma Parker worked her styling magic on willing participants — the clock chimed 11 p.m., and with that, Fashion’s Night Out came to a close.