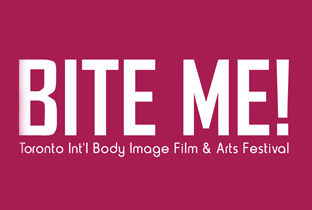 What should you say to those who tell you not to eat pizza because it will make you fat or that those who celebrate sexuality are promiscuous? "Bite Me!" Toronto’s International Body Image Film & Arts Festival is back for its second year. Celebrating body diversity, the festival commences tonight at the National Film Board of Canada.

“Everyone talks about how the body looks; rarely do people talk about what the body does,” says Jill Andrew, festival director at Bite Me!. The goal is to celebrate the body as a force, not an object. “It’s a celebration of body in motion, body resisting violence, body achievement.”

Through a myriad of films over the next three days, the festival’s mission is to provide different perspectives on controversial issues like cosmetic surgery, race, misogyny and more, including heavy-handed topics like female genital mutilation (the festival is 19-plus due to the mature nature of some of the films).

Katrin Bowen’s Amazon Falls will be the official opener for the festival. Loosely based on her experience as a B-list actress living in L.A., it tells the story of Jana, played by April Telek, who refuses to give up on being an actress. The movie explores the lengths that people go through to pursue their dreams, even if it means changing who they are.

“It’s valuable to have these festivals," Bowen says. "People shouldn’t shy away from the issue.”